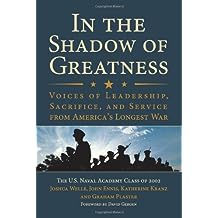 In the Shadow of Greatness: The Voices of Leadership, Sacrifice, and Service from America’s Longest War

In the Shadow of Greatness:  Voices of Leadership, Sacrifice, and Service from America’s Longest War, is an anthology of short stories written by graduates of the United States Naval Academy class of 2002; the first class to graduate after the 9/11 attacks. These first-person accounts were gathered to show how the academy prepared them for their roles as junior officers in the War on Terrorism. Nearly 100 accounts were submitted and a third of them published in this small, but readable volume (another 30 accounts are available online). The individual stories are interesting, but the overall message lacks balance. There is a preponderance of aviation and USMC stories, as well as those from individuals who volunteered for ground assignment as Individual Augmentees (IAs) duty during the war. Only one of the vignettes is written by a submariner and there are none from any of the 16 SEALS who graduated with the class. (The SEALS purposely did not submit their stories out of respect for their warfare community). Only a few of the stories deal with direct combat, which may disappoint some readers.

This book could have been written by graduates from any college that provides a program to receive a commission. It could have been written by enlisted personnel who graduated from a military boot camp. But the class of 2002 at the US Naval Academy made the effort to write, edit, and publish, and they deserve the credit for such a huge undertaking. (Additional credit goes to the class non-profit organization which donates any proceeds to organizations that support education, training and excellence with the US Navy, USMC and veteran community). Lay readers will get a sense of what USN and USMC junior officers do in their everyday routine, but readers with a naval background will probably skim through the day-to-day portions of military life.

The book’s title and introduction pages may lead the reader to question whether the authors are trying to bill themselves as the next “Greatest Generation”?  It was over 50 years from the end of World War II before Tom Brokaw wrote his book The Greatest Generation, and the moniker was quickly attached to all veterans of that war. Yet, only a decade later, the authors of In the Shadow of Greatness appear to want to attach that stamp to themselves. Some may interpret this as being presumptuous.  Only time will tell if they will indeed become the next “greatest generation.”

It is no surprise that the role of mentors is mentioned by several of the graduates.  Mentorship at the Naval Academy and as Fleet Sailors and Marines plays a prominent role in the maturing process of junior officers. Curiously, there is little discussion about the importance and impact of mentors from the senior enlisted ranks.

The United States Naval Academy mission statement figures prominently in this book.  A portion of that mission statement is: “To develop midshipmen…in order to graduate leaders who are dedicated to a career of naval service and have potential for future development in mind and character to assume the highest responsibilities of command, citizenship, and government.”

Most of the accounts in the book discuss the development process of USNA midshipmen and how the four years at the academy prepared them for their trials and growth as junior officers. Yet, when this book was published, none of these men and women had sufficient time in service to have had the opportunity to attain those highest levels advocated in the academy mission statement. All of the book’s chapters demonstrate that the lessons learned during their four years at the academy have served them well as junior officers and as civilians. In the epilogue, Admiral Mike Mullen, USN (Ret.), states that, “They have learned to be statesmen as well as soldiers, diplomats as well as warriors. Indeed, they have learned that in these new “savage wars of peace” the skills required of military leaders are often the same ones required of any good community leader: patience, understanding, decisiveness, and yes, to a degree, restraint.” Certainly as junior officers, they learned those skills and are honing them to meet the challenges ahead of them in their careers, in both the military and civilian sectors.

Decades from now, it will be interesting to see if this generation emerges from the shadow and achieves greatness in their own right.

Lee Duckworth is a retired naval aviator and for the past nine years has served as Director of Education at the Hampton Roads Naval Museum. He is a 1969 graduate of the United States Naval Academy.