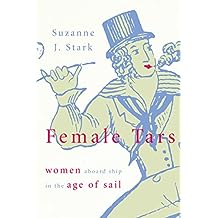 Female Tars: Women Aboard Ship in the Age of Sail

Female Tars: Women Aboard Ship in the Age of Sail is a reprint of the late Suzanne Stark’s 1996 study of women who went to sea aboard Royal Navy warships from the late seventeenth through mid-nineteenth centuries. While official regulations barred women from traveling in or serving aboard warships during this period, women were regularly found on naval ships with the presence being ignored and hidden. This raises questions of how and why these women found their ways to the lower decks. As Stark states, “The primary aims of this study are to disentangle myth from fact in the stories of the women who lived on the lower decks of the ships of the sailing navy, to discover why these women chose to participate in the harsh life on board, and to place them within the social context of the limited roles open to lower-class British women in the eighteenth and nineteenth centuries.” (4) To that end, Stark examines the social and economic status of women during this period, placing it within the context of life aboard ships of the Royal Navy.

The first chapter focuses on the women who went on board while ships were in port. The bulk of these women were prostitutes. Stark examines how these women were seen as a means of addressing the poor conditions, lack of shore leave, and fear of desertion that faced the Royal Navy during this period. The stat of continual warfare that England found itself in meant that most crews were comprised of pressed men. AS captains were reluctant to grant shore leave for fear of desertion women were brought out to ships in the harbor and allowed to stay on the lower decks (with many smuggling alcohol aboard). The abundance of prostitutes can be attributed to the social and economic restraints placed on women of this period. Lower class women who found themselves widowed or orphaned had no rights and little means of making an income. Some women found their ways to England’s port cities in an effort to connect with their pressed husbands, only to be left destitute if they remained behind when his ship sailed.

Chapter two looks at the women who went to sea on the lower decks. Women who went aboard ship with their husbands fell into two groups – wives of commons sailors and wives of warrant and petty officers. A sailors’ wife had nothing. As she was not entered into the log books as part of the crew she did not receive provisions, nor was she accorded her own hammock. These women were reliant on their husband sharing his rations and hammock, and had little or no privacy. They were not assigned any specific tasks, though some did laundry for money. Additionally, a number of wives participated in many of the Royal Navy’s battles by helping at the guns or assisting the surgeon. For warrant officer’s wives – life was a bit better. They had a bit more privacy and ate in the wardroom where additional food was purchased to supplement the ships rations.  Regardless neither group of women were rewarded for their work aboard ship – even in battle.

In the third chapter Stark examines those women who disguised themselves as men, and joined the Royal Navy or marines. Despite the stereotypical image of frail women who went to see after their lost love, most women were of a strong nature to pass as young boys or men. As the Navy was desperate for sailors, willing volunteers were not turned away. A potential recruit was not required to provide any proof of identification, nor submit to any physical examination. Once on board a woman was still able to conceal her true identity as crews rarely changed their clothes or bathed. Stark notes that the women who went to sea were not social rebels, and in most cases were escaping the restrictive economic and social status of the period. The fourth chapter expands on the women who disguised themselves by examining the autobiography of Mary Lacy – who went to sea as William Chandler in the 1760s. Lacy’s story is notable as being one of the few verified accounts of a woman at sea disguised as a man from this period. Often forgotten now, Lacy’s autobiography details her life as a carpenter’s apprentice in the Royal Navy and eventually in the yards of Portsmouth.

Despite being Stark’s only work on naval history, Female Tars is well-written, and accessible to both academic and casual readers. This study expands our understanding of life aboard Royal Navy warships during the age of sail. In doing so it brings into context the social and economic situations women faced during the long eighteenth century with the wartime pressures faced by the Royal Navy to keep warships manned. The Naval Institute Press should be commended to bring such an important work back into print.