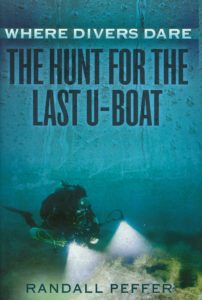 Where Divers Dare is an fascinating read for those interested in either World War II’s Battle of the Atlantic or deep-sea diving. The book creates a duality, starting with the events leading to the sinking of U-550 and transitioning to the eventual discovery of the wreck by a team of divers. Peffer has crafted an excellent story which demonstrates that history is not necessarily set in stone, and is sometimes an educated-guess rather than an absolute truth. While Where Divers Dare recounts an interesting story, it only aspires to tell a good story, as it lacks elements which prevent its classification as a scholarly text.

The highest praise to be given to Peffer is the technical detail he conveys through his writing. Peffer demonstrates expert-level knowledge of sailing and diving, and is able to convey this expertise in a manner which those with varying levels of understanding can comprehend. One such passage reads, “And he can lose the DEs by going beneath a thermocline that he suspects exists at about 100 meters below the surface. It’s a layer of colder, denser water that the Americans’ sonar cannot penetrate, the ultimate natural shield to hide him from his enemy.” The rear flap of the book states that Peffer holds a 100-ton license and has logged over a hundred thousand miles at sea. Peffer also conveys an understanding of diving. In the second half of the book, focused on the divers who find the U-550 wreck, he uses diving colloquialisms such as narked, free ascent, and getting bent. As far as content is concerned, Where Divers Dare presents enjoyable prose with technical detail that provides context without being overwhelming.

The Author’s note states, “The events, the actions of individual men, and the dialogue in this book have been carefully reconstructed from my firsthand observations as well as the stories of the men involved, their families and eyewitnesses. When necessary and appropriate, I have also relied on an extensive collection of relevant books, websites, military records . . .” While the content in the book seems to demonstrate historical acuity, the book does indeed fall short in this regard. There is a complete lack of citations, or a works cited page. There are moments when the reader is told what the historical characters are thinking and the general progression has the feel of prose. This is most evident in the first section of the book, regarding the events during the Battle of the Atlantic. The lack of citations in this portion can cause skepticism to arise at certain instances and, more importantly, does not give any credit to the authors of the secondary sources which Peffer mentions in his Author’s note.

The diving section, which begins in 1983, suffers less from these issues. The lack of sources or citations for the diving section did not detract from the story significantly, but still would have been appreciated. This is not to say the book is not a worthwhile read, because it is most certainly enjoyable. However, because of the issues with citations this book cannot be considered a scholarly text.