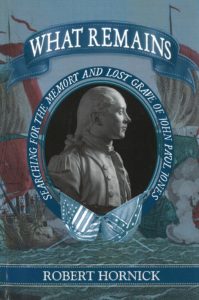 There have been a plethora of volumes written about American Revolutionary War hero John Paul Jones; Hornick’s effort is not a biography of the man nor is it a recounting of his brilliance in battle. What Remains is an exquisitely presented detective story but with a unique twist: we know the outcome at the beginning. So what makes this book so appealing?

Among other things, it is a recounting of the times – late 18th and early 19th centuries – and the sentiment of a fickle public. Within four years of Jones’ death, few in America could even recall the name, let alone his extraordinary feats of heroism and bravery. The author describes Jones’ tragic end of life, including his frustration at being cast aside by his adopted country which would not even pay him the moneys due him or give him the ship and rank promised him. A lonely death and burial seemed to be an echo of Jones’ last years. And to compound the insult, the entire cemetery in which his grave was located was closed and built over, virtually ensuring his grave and five hundred others would remain forever anonymous. Enter now, a dedicated individual, Horace Porter, American Ambassador to France in 1897 under President McKinley. I give nothing away when I tell you he found the grave.

Mr. Hornick is a talented story-teller and the result is an easy to read, thoughtful, and logical unfolding of the detective work involved in locating not only the grave of John Paul Jones (Paris), but then in identifying the corpse to the satisfaction of all the nay-sayers. The author makes his case clearly, concisely, and cogently and, while there was little unequivocal proof that the remains discovered were, in fact, those of John Paul Jones, the overwhelming circumstantial evidence was presented in such a way as to convince all but the most committed sceptic. The “leg-work” the discoverers of the late 19th and early 20th centuries did, the comparisons, the paperwork, (remember, no internet, computers, or even a proper filing system was in place) and on top of that, they had to deal with the depredations of the French Revolution which was in full cry at the time Captain Jones died. Records they found were generally hidden to avoid destruction by the new government. It makes a great story, and Hornick tells it well.

He does include a chapter on Teddy Roosevelt’s Great White Fleet and its cruise around the world which occurred in 1907 shortly after Jones’s body was returned to the United States. While TR was a huge advocate for the navy and a proponent of that which John Paul Jones offered, there seemed no logical reason to interrupt the flow of the story with a lengthy discourse on the politics of rebuilding our fleet and the successful ‘round the world cruise. It added little to the story and, in the opinion of your reviewer, detracted from the fascinating story that preceded it.

That issue – clearly the author’s prerogative – aside, the book is well executed, easy to read, and a great tale of exhaustive detective work and dedication. Highly recommended to any with an interest in American history or the early days of our navy.

Mr. White is an author specializing in early 19th century naval historical fiction and a member of the NHF’s Holloway Society.