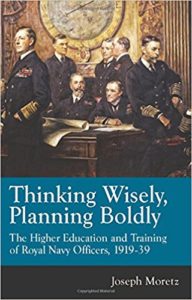 The years following the Great War have become something of a favorite of modern day military analysts in search of historical analogy. The development of innovative doctrine, the introduction and assimilation of new technologies, and struggles with fluctuating fiscal support for national defense, all make that era before the start of World War II appear relevant again as nations face the dilemmas of the 21st century. While developments in the fleets of both the United States and Great Britain have received a good amount of attention from scholars to help inform these comparisons, much less attention has been paid to the educational system that prepared the officers to face their challenges. Joseph Moretz’s book Thinking Wisely, Planning Boldly makes a commanding foray into the subject of Royal Navy officer education which is an important contribution to understanding of the era.

Noted historians, like Arthur Marder and Stephen Roskill, have written on the subject but mostly in passing and as part of wider examinations of the period following the Great War. As a result, previous scholarship on the subject sometimes lacks depth and focus and commonly relies on memoir and oral histories from the officers who served rather than the archival record. Moretz lays all this out in a clear summary of the literature, and then proceeds to offer the deep research and focused examination of the education and training programs which were the part of senior officers’ careers. The first two chapters offer the reader context on the era, discussing the aftermath of the First World War and the issues the Royal Navy faced: including reestablishing the norms of a peacetime navy, the financial challenges that came with post-war retrenchment, and the requirements of Imperial interests and political necessity.

The bulk of the remainder of the book is made up of chapter length examinations of the different courses senior officers took during their progression through the ranks. The re-introduction of the staff course at Greenwich, initiated prior to the war but suspended during hostilities, and the history of its purpose, curriculum, and leadership was the first school which many officers experienced at the mid-grade and senior level. It also had a broad focus on the introduction of policy and strategy so graduates could serve effectively on the staffs of higher commands. This was paired with the Senior Officers’ War Course, also focused on strategic decision making in both peace and war, taken once an officer was promoted to Captain. Moretz’s descriptions and analysis of these courses come from an impressive breadth of research both in the official documents and the private papers and reminiscences of officers who both attended and taught the courses. Significant figures, like Herbert Richmond and the cohort who began the Naval Review before the war, now promoted into positions of responsibility appear in the history but the author balances them well with the experiences of the average officer as well as those promoted to important senior positions during the Second World War.

Following his examination of the well-known courses at Greenwich, Moretz dials out his scope and considers the other training and education programs which were a part of the naval officer’s career path. These included the Senior Officers’ Technical Course and the Tactical Course, both of which have received very little attention from other historians. Moretz’s focus is not only on what was taught at these courses, but also how and when they fit into an officer’s career and how the staffs that taught the courses were used by the Admiralty as experts within their fields: either the technical materiel of war or the tactical employment of that changing materiel. The book then examines how naval officers fit into the increasingly important ideas of jointness, including attendance at the Imperial Defence College as well as the staff colleges at Camberley and Andover run by the British Army and the Royal Air Force. These are treated with the same depth of research as the staff course and war course.

The final chapters of Thinking Wisely, Planning Boldly consider how officers were used following their completion of the courses, and reflects on the experiences of officer education between the wars with some wider analysis. Some graduates were used well, and assigned to appropriate staff positions. However, as most members of any military bureaucracy will identify with, many received assignments that made little use of their newly acquired knowledge. Moretz’s analysis asks well considered questions raised by the history, both in search of areas for expanded historical study and also in looking to apply the information he presents to inform modern day efforts at preparing the Royal Navy for its mission.

Readers should be forewarned this is a dense book. The author’s exhaustive research occasionally results in digressions that consider specific biographical notes of figures who appear, or detailed examinations of staff processes and naval policies not directly related to the subject of the book. These digressions are always interesting and incredibly well sourced, but nonetheless can seem to take the work off track for a moment. This may result in minor confusion from readers who are not expert in either the inner workings of the Royal Navy of that period or of particular personalities and why they were important. Likewise, the almost complete lack of explanation of how officers were trained and educated in their junior ranks misses an opportunity to provide non-specialists with important context and foundation. These are minor issues, however, and they may actually serve to increase a general reader’s interest and desire for further investigation.

Joseph Moretz has written what should be considered an authoritative and in-depth account of Royal Navy senior officer education in the interwar era. In doing so, he has made not only an important and needed contribution to the scholarship on the period, but he also offers analysis and important frames of reference for modern discussions and debates. How to prepare officers for the responsibilities of command and strategic decision making is a question of perennial relevance as the world’s navies face the sole constant of history: change.

CDR Benjamin Armstrong, PhD, is an instructor at the United States Naval Academy.