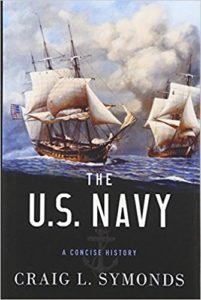 It is often a pleasure to read short books, and Craig Symonds’ The U.S. Navy: A Concise History does not disappoint. Symonds, professor emeritus at the United States Naval Academy, is an eminent scholar of naval history whose work has focused primarily on the navies of the American Civil War, but has also ranged from his earliest Navalists and Anti-Navalists (1980) about naval policy in the Jeffersonian era to a reconsideration of the Battle of Midway (2011). Here, he brings his pen to bear on a work of short synthesis, tracing the Navy’s many wartime expansions and peacetime contractions within the larger transformation of a force designed to protect, promote, and sometimes raid maritime commerce to one structured at the turn of the twentieth century by the imperatives of empire and a more muscular vision for the United States in the world. Symonds contends that the history of the U.S. Navy is not one of unabated growth and power, but rather, in his metaphor, a “sine wave . . . oscillating dramatically between periods of quiet torpor and moments of frenetic expansion” (pg. ix).

Symonds proceeds chronologically from the birth of the Continental Navy to the 2014 commissioning of the Navy’s newest Zumwalt class destroyer. He gives readers a balanced treatment of naval combat and peacetime flag-showing alongside questions of administration, technology, strategic thought, and social history, placing all within a brief, but useful political, military, diplomatic, and cultural context. This is no small feat as Symonds deftly consigns to a page or paragraph topics that have merited whole books—some of which he himself has written. Symonds is painting in broad strokes, and he does it well. The cast of characters should be familiar to naval historians. Barbary corsairs and Old Ironsides, Matthew C. Perry and Matthew F. Maury, Luce, Mahan, Sims, and Nimitz, guerre de course and sea power, Operation Market Time and Operation Praying Mantis, Symonds hits the important people and the significant moments with an eye for salience and for big questions of significance. He seems particularly interested in identifying evolutionary change within the service in technology, geopolitics, and culture—by which he means the social demographics and experience of the officer corps and enlisted personnel. How did the U.S Navy evolve from “a handful of small sailing craft to the juggernaut of today?” Symonds wonders (pg. ix). The answer, he suggests, is to be found in the confluence of these technological, social, and geopolitical factors over time.

Symonds is not the first to ask such questions, nor is he the first to answer them in now-familiar ways. The book joins Kenneth J. Hagan’s fine This People’s Navy (1991) and his edited volume In Peace and War (1978), Robert W. Love’s two-volume History of the United States Navy (1992), E.B. Potter’s Sea Power (1960), and James Bradford’s new edited volume America, Sea Power, and the World (2016) as the most significant works of synthesis in the field. With the exception of the latter, these books are all at least a quarter century old—in Potter’s case, much older—and so it is perhaps no surprise that 2016 saw the publication of two new works that concern the general history of the American navy.

Symonds’ book is especially welcome in that it moves the narrative forward another generation. Of this most recent era, Symonds argues, the Navy became “the global cop on the beat: quelling pirates, chasing smugglers, deterring terrorists, and occasionally extending a humanitarian helping hand” (pg. 116). Conspicuous for its absence in this era, of course, is naval war in its conventional Mahanian sense. Operation Praying Mantis, in which the U.S. Navy and Marines destroyed surface elements of the Iranian Navy and occupied several oil platforms in the Persian Gulf in April 1988, is the exception that proves the rule. Symonds warns his readers that from the final years of the Cold War to the present, “the United States confronted the reality that great military power did not translate into the ability to control events” (pg. 106). A navy unrivalled in its dominance, nevertheless finds itself in some ways ill-equipped to meet a multiplicity of post-Cold War threats in an era of new strategic and fiscal realities.

With the exception of this final chapter, Symonds is plying waters well-sounded by previous syntheses. Unique in its brevity, A Concise History nevertheless hardly deviates from the traditional course of naval historiography. While Symonds in some ways echoes Hagan’s emphasis on the endurance of brown water and commerce-raiding operations, at other points he appears quintessentially Mahanian in seeming to lament postwar contractions. He characterizes the period after the Civil War, for example, long known by naval historians as “the Doldrums” or “the Dark Ages” as “an era of swift retrenchment with little forward progress” (pg. 55). The commissioning of Texas and Maine, which naval historians often cite as one beginning of the New Steel Navy of the 1890s, is, to Symonds, “another false dawn,” citing the vessels’ small size, limited range, and design for coastal operations (pg. 59). The reader can’t help but sense that for Symonds, like many others, the period between the Civil War and the Spanish-American War was one of regrettable decline, examined with a sort of historiographical impatience anticipating the arrival of an American naval renaissance. While Symonds is correct that the Navy lost the technological edge seized during the Civil War and that many naval officers chafed at slow promotion through the ranks, he seems to ignore the compelling argument made by Hagan in American Gunboat Diplomacy and the Old Navy (1973) and echoed in This People’s Navy, in particular, that the Navy’s size and its force structure in this era generally met the needs of the nation at the time. Whether Symonds agrees or not, some acknowledgement of these interpretations and some inclusion of newer work by John Sumida on Mahan (1997), by Katherine Epstein on torpedoes and a turn-of-the-century military-industrial complex (2014), or James Rentfrow on the origins of fleet operations in the North Atlantic Squadron (2014) would acknowledge the ways historians’ understanding of the Navy’s history has been revised or enriched in recent years.

One area in which this book excels over earlier works like it is in its treatment of the Navy’s social or cultural history. Where earlier general histories of the Navy have focused mainly on operations, administration, and questions of technology and strategy, Symonds also keeps his eye on the demographic, social, and cultural changes of its officers and enlisted personnel and their experience over time. There are some wonderful moments in the book where Symonds takes readers into Olympia’s fire rooms during the Battle of Manila Bay (pg. 63) or into the cockpits of “giddy” dive bomber pilots at the Battle of Midway (pg. 81). Such moments showcase Symonds’ unique talent for storytelling that, by the nature of a book like this, can only shine too briefly. This book, in fact, makes an excellent companion to Symonds’ Decision at Sea (2006), in which the author is able to develop these page-turning narratives in greater depth.

Still, Symonds might have gone farther within the parameters of this brief introduction to include a deeper incorporation of blacks, other racial and ethnic minorities, and women. To read this book and scan its index—like many other books in this field—is to read a history of white men. Part of this, of course, is inescapable, and Symonds does go to some lengths to include women and African Americans, in particular. Nevertheless, these groups appear more as a faceless and nameless social group than as individuals relative to the many male officers, listed above, who constitute the Navy’s main figures. Among the many white men astride quarterdeck and bridge, Symonds briefly mentions the pilot and astronaut Wendy Phillips. He might also have included, for example, Nancy Harkness Love, Grace Hopper, Wesley Brown, and Michelle Howard, among others.

Among a few minor errors in this book, one worth bringing to the readers’ attention is the image on page 86, which, according to the caption, shows Curtiss Helldivers aboard USS Yorktown. They are, rather, P-47 Thunderbolts aboard USS Casablanca enroute from California to Guam in July 1945. One wonders how that oversight escaped both Symonds and the editor’s scrutiny.

Altogether, this is a well-crafted, useful little book. It succeeds brilliantly in distilling a long, complicated history of American naval affairs without sacrificing too much to the demands of brevity. While Symonds might have missed opportunities to say more about new scholarship and, in particular, about the individual contributions of women, African Americans, and others, such criticisms must be partly tempered by the very nature of this book and its aims. The U.S. Navy: A Concise History will be a necessary addition to the shelves of naval, military, and maritime historians. The book’s succinct structure will make it useful in the classrooms of service academies, Professional Military Education, and civilian institutions. While the story Symonds tells here will be familiar to naval historians, the book should serve as the standard primer to undergraduates, military officers and enlisted personnel, and policy-makers seeking to know something about the Navy’s past.