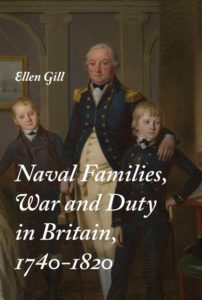 They that go down to the sea in ships, that do business in great waters may have been men in King George’s Navy, but they were not all bachelors. Those left behind—often for years at a time—did more than keep the home fires burning as Ellen Gill, an independent scholar, recounts in Naval Families, War and Duty in Britain, 1740-1820. Spousal support beyond stewarding family responsibilities absent the legal head of household also frequently abetted the professional’s career. In an age when interest and patronage assumed outsized proportions in the Naval Service such contacts, whether made through official or unofficial channels, allowed those serving on a distant station to advance their prospects or at a minimum keep it from suffering in the doldrums. Much of this story is already familiar to naval historians, but the value of Gill’s monograph is of the importance of correspondence and the conventions such followed during the period comes to the fore.

In an age when isolation from civil society immediately followed the taking-in of the ship’s lines, the importance of correspondence even allowing for the limitations of the means at hand, became all important for sustaining the morale of all concerned, be it the wife or the child remaining ashore or the sailor upon the sea. Gill’s avenue for assessing this vital link in action are the letters of a finite number of naval and military officers where both ends of the correspondence survive. Sadly, few such pairings exist owing to the dearth of letters from the wives of naval officers being available. This may say more about what others of an earlier moment thought worth preserving. Still, it also suggests that in deeply personal correspondence between lovers where one is a public figure of even minor repute aspects of discretion have prevailed. This does not detract from what the author has achieved, but it is a reminder that a glimpse only is being provided of the times and their participants.

Still, that glimpse is of much value for the tenuousness of life and its circumstances formed much of the context of the Georgian Navy. For every day that Admiral Nelson spent in battle, a matching year was spent on blockade. Time was a commodity that weighed heavy on both family and flag officer and, of course, on those not so nearly exalted. Letter writing might bridge the distance, but it could not conquer time. Indeed, with a postal system operating at the mercy of the elements and in the face often of an enemy desirous of securing British mails for the intelligence that it offered, that any missive might reach its destination was not to be assumed. That knowledge often led to the numbering of letters the better for the recipient to gauge the pace of communication, but also its absence.

Naval Families is anchored on a firm foundation of academic secondary literature and archival sources and offers a reasoned accounting of the ‘personal’ factor for those serving in the period’s Royal Navy and, yes, the British Army, notwithstanding the work’s title. The author’s conclusion that the stereotypical portrait of the jolly Jack Tar is difficult to square with the realities of service life is undeniably correct. That image was a work of fiction and probably seen as such by much of the British public. The metaphor nevertheless served a purpose. The six novels of Jane Austen are fiction too and while allowing that being the sister of two eventual Flag Offices provided Austen with a window into the Navy, the works remain every bit as fiction as the jolly Jack Tar so lamented by Gill. The merits of Persuasion and Pride and Prejudice can stand or fall on their own, but their source as confirming the validity of the author’s conclusions remains suspect at least to this reviewer.

More questionable, is the failure to consider the case of Admiral Lord Nelson in a work surveying naval life, the naval family and the value of correspondence. Yes, much ink has been spilt on that story already. Yet, the triumvirate of Nelson, Lady Nelson and Emma Hamilton is very much the elephant in the room, if only because that admiral came to define the ethos of the nineteenth century British Navy. The letters of dockyard workers and their survivors petitioning the Admiralty is a story rich in pathos; the more so as most were unsuccessful. Likewise, Nelson’s petition to the Admiralty in 1799 for his share of prize money whilst serving in the Mediterranean and not recounted says much about the workings of the Admiralty, the place of interest in naval life and the usefulness of letter writing. In Nelson’s case, £10,000 of usefulness, or in today’s valuation about £850,000. Meanwhile, a demanding, estranged wife and an extravagant mistress bided his return.  This is not to dismiss the contributions of a Philip Broke of the Shannon and his loving Loo or that of a George Perceval and his wife Jane. The joys of fatherhood and its sorrows along with words of wisdom shared with growing children offer portraits of naval officers often missed by military historians. It is a story worth bringing to a broader audience. Theirs though is the story of the second eleven.

The accounting provided by Gill though remains a solid work of research and of historical discourse. Enjoyable to read, warmly told and accompanied by several illustrations, Naval Families will appeal to those attuned to the social side of British history, if not always to its Navy. Meanwhile, those that continue to go down to the sea in ships may ponder how much has or has not changed in the intervening two centuries. If Gill’s work be any guide, perhaps rather little.