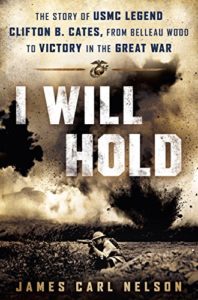 The annals of American military history reveal a breadth of scholarly writings, encompassing the stories of countless heroes of war and the battles in which they fought.  These legends are often remembered for acts of heroism that imbue the unrivaled victories of the U.S. military with celebrated accounts known today.  James Carl Nelson provides a narrative of one individual worthy of such remembrance.  In I Will Hold, Nelson documents the numerous exploits of Clifton Bledsoe Cates in a detailed biography that covers Cates’ beginnings as a rugged outdoorsman from Tennessee to a Marine Corps officer on the battlefields of France during the Great War.  Fighting with the newly formed 6th Marine Regiment from Quantico, Virginia, Cates’ achievements in combat reflect multiple acts of extraordinary heroism serving on the Western Front against the German army.  While this book also highlights Cates’ extraordinary actions in battle, Nelson notes that Clifton B. Cates’ was defined by not one single act, “but for his body of work in World War I.”

Readers of military history are familiar with the famous battles of the U.S. Marines who faced heavy losses in the stalemate of trench warfare on the Western Front.  However, Cates’ story is unique.  During a time when the Marine Corps itself was unknown to many Americans—even Cates himself did not know what the Marine Corps was before he joined—the small force would expand from 18 thousand at the beginning of the war to 60 thousand by the peak of US involvement.  Nelson’s monograph traces a small number of these men by following Cates’ 96th company and his men through each town and battle.  From their extensive training in Quantico, Virginia, to the bloodiest battles Marines suffered to date in Belleau Wood, Soissons, Blanc Mont, and Meuse-Argonne; Nelson’s story paints a meticulous depiction of intense battles against unrelenting German machine gun and artillery fire and the man who literally led his men from the front.

Contrary to the hundreds of men who perished within his regiment, Cliff Cates earned the appropriate nickname “Lucky” after surviving two gun shots to his helmet, a barrage of German machine-gun and sniper fire, shrapnel wounds from artillery, and multiple close calls with lethal mustard gas attacks.  On July 19, 1918, the deadliest day in the 6th Regiment’s history, Cates was one out of only a dozen men, from the unit of over four hundred, who survived.  The 96th company was eventually disbanded due to casualties, and the survivors scattered to other units.

A day after the unit’s decimation, Cates tasked a runner to carry a letter to his regimental commander, Colonel Thomas Holcomb.  In it, Cates asserted, “We need support, but it is almost suicidal to try and get it here as we are swept by machine gun fire and a constant artillery barrage is on us.  I have no one on my left and very few on my right…I WILL HOLD.”  This quote, made famous in the aftermath of the Battle of Belleau Wood, characterizes the courage and leadership of the young officer in the face of an unyielding German enemy.

Fortunately for Cates, his run of luck endured through the culmination of the war as the Marines forced the German army to capitulate in November of 1918.   Lucky Cliff Cates’ career continued long after his escapades in the woods of France, commanding the 1st Marine Regiment in the Pacific campaign of World War II in harrowing locations such as Tinian, Guadalcanal, and Iwo Jima and, as Nelson eludes, would appropriately conclude as the highest authority in the Marines—a four-star general and service as the 19th Commandant of the Marine Corps.

Nelson’s historical methodology includes a quality assessment of evidence and expresses an almost reverent narrative for the “laconic” Cates.  Exhausting an extensive variety of primary resources, Nelson uncovers the intimate details of Cates’ military career, surveying extensive amounts of personal correspondence, oral narratives from Cates’ family, as well as military records from the Marine Corps and National Archives in Washington, D.C.  The preponderance of these sources come from Cates’ personal letters from war and unit histories from the 6th Regiment.  Additionally, Nelson draws from a hefty amount of secondary sources to supplement the biographical material, which encompasses the broader historical details of the United States’ involvement in the war.

What the book achieves in detailed research, it lacks in organization of evidence by ignoring much desired endnotes or footnotes.  To the greater public, this work is highly accessible and easy to digest with its short chapters and flowing narrative.  However, Nelson’s work would benefit from the inclusion of sources as a convenience for the reader and for the use of scholars to verify the extensive quotes and facts used in the narrative.  Nevertheless, the format works well for popular history.

Ultimately, while I Will Hold has some limitations for its use by scholars and researchers, it is a suitable and highly-recommended read for anyone looking to learn more about the Marine Corps in the Great War.  It also would serve junior officers well as fodder for leadership discussions, or in efforts to gain a better understanding of small unit leadership.  Despite the 100-year-old story of “Lucky” Cates, its historical analysis is contemporary in its methodology and is easily approachable for a wide audience of military professionals and historical readers.