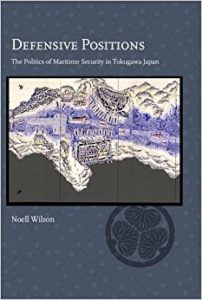 Conventional wisdom among historians had long held that throughout most of the Tokugawa Period (1603-1868), Japan pursued a policy of self-imposed isolation from the outside world. Japanese historians even coined a term, sakoku, or “closed country,” to describe this paradigm. However, more recent historiography has persuasively repudiated this earlier view, demonstrating that Japan, while indeed limited in its contact with the West, remained an active and consequential actor in Asian affairs during the Tokugawa Period, with maritime trade playing a major role in that engagement. Nevertheless, the Tokugawa Shogunate, which emphasized maintaining domestic political control, showed little interest in developing the capacity to project naval power and preferred instead to define maritime defense as starting at the coastline. Given that, coastal defense takes on a particular significance to the study of Japan’s political and military affairs during the Tokugawa Period, as Noell Wilson’s Defensive Positions: The Politics of Maritime Security in Tokugawa Japan indicates.

While previous histories have tended to treat coastal defense as an issue only addressed by Japan’s rulers toward the end of the Tokugawa Period as a response to the renewed threat of the Western imperial powers, Wilson shows that the issue of constructing, maintaining, and manning coastal defense installations dates back to the early Tokugawa Period. Beginning as early as 1641, the Tokugawa Shogunate appointed regional lords known as daimyo to supply the troops to man the fortifications of Nagasaki, Japan’s main port of entry for foreign vessels, on a rotational basis. Thereafter, the daimyo-managed coastal defense mission expanded by including interdiction of Chinese and Japanese smugglers, protection of the Dutch trading establishment at Nagasaki (the Dutch being the only Europeans with whom the Japanese were still trading), and expansion of coastal defense installations to other major port cities.

According to Wilson, the evolution of coastal defense along those lines during the Tokugawa Period had significant political ramifications. Emphasizing that coastal defense is an expression of national sovereignty and reiterating Max Weber’s assertion that the monopolization of violence was “the foundation of political stability of the early modern world” (p. 10), Wilson argues that the Tokugawa Shogunate’s decentralized policy of ceding responsibility for coastal defense to the daimyo ultimately undermined its sovereign position as the national government. As a result, by the middle of the nineteenth century, some of the more powerful daimyo, who were increasingly concerned about national defense against the incursion of the Western imperial powers, had begun to take the lead in carrying out their own military modernizing reforms and were increasingly ignoring the Tokugawa Shogunate. Wilson concludes that this increasing irrelevance in the realm of coastal, and national defense as well as the compromise of its legitimacy due to the loss of the monopolization of violence played no small role in the downfall of the Tokugawa Shogunate in 1868.

While Defensive Positions is commendable for reminding readers of the importance of coastal defense throughout the Tokugawa Period and for shedding much-needed light on the political dynamics of coastal defense, Wilson’s larger conclusions are less persuasive. Her acceptance of the Weberian association of the sovereignty of the state and the monopolization of violence leads her to apply a Western construct that is ill-suited to the much more complex and decentralized division of military responsibilities in Tokugawa Japan. Indeed, in the Tokugawa system, the daimyo were required to maintain their own armies and to deploy those armies at the behest of the Shogunate, which, as the national government, in turn determined national defense requirements. In this system, then, the acceptance by the daimyo to oversee and man coastal defense installations was, if anything, an expression of their acceptance of Tokugawa sovereignty rather than an arrogation of that sovereignty. Moreover, Wilson actually contradicts her argument in later chapters when she shows how Tokugawa efforts in the mid-nineteenth century to place coastal defense under the direct control of the Shogunate upset those arrangements and antagonized the daimyo by threatening their traditional autonomy. In other words, it was not the inherent decentralization of the coastal defense structure, but rather the Tokugawa Shogunate’s late-in-the-day bid to centralize power that provoked many of the daimyo to rebel against it, thereby contributing to its downfall.