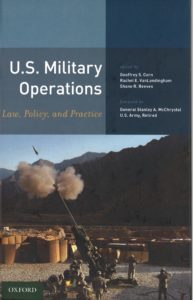 This book begins with a disclaimer that the views expressed within the publication are those of the respective authors of the chapters/essays and are not necessarily the views of any governmental or nongovernmental agency. This is a wise disclaimer, especially in light of the contemporary political dispute over the rule and regulations and principles that should guide military action. The immense complexity of this volume is a testament to the tension between civilian control over the military importance that the personnel of the military is able to perform their duties despite the constraints placed on them by civilian control and their adherence to the applicable laws of armed conflict. Given this complexity, it is unsurprising that this book should be so long and filled with the perspective of insiders writing about their areas of expertise relating to various areas where the behavior of the military and its personnel interact with both domestic and international laws and treaties. It is likely that the reader of this book will be someone who for professional or academic or perhaps personal reasons has a need or want to know about these matters in considerable detail. This volume provides precisely that feature on a wide variety of topics.

Included in this volume are 23 chapters written by a variety of experts.  After an introduction by retired army General Stanley A. McChrystal, the book begins with a discussion about the many facets of the role of the U.S. Judge Advocate in contemporary military operations. After this comes a discussion of the relationship between modern weapons and the law of armed conflict.  Essays follow discussing the legal classification of military operations as well as the doctrine of the just war, or the jus ad bellum. An essay details military cyberspace operations while another one looks at the relationship between targeting and the law of armed conflict. Two essays follow which discuss the development and tactical implementation of rules of engagement in complicated contemporary operations, which are frequently multinational. Two more essays follow on both the strategic as well as the tactical and operational levels of detention operations in light of the political difficulties resulting from scandals like Abu Gharib during the Iraq War. A detailed analysis of multinational operations follows. Further chapters discuss the relationship between American military operations and the Red Cross as well as the role of environmental law in military operations. There are examinations of the enforcement of military justice on soldiers in combat, how to deal with operational claims, and the body of law that governs intelligence gathering, which deals not only with the laws themselves but also the philosophy of these laws. There are also essays about the legal issues of special operations, the special rules that govern medical operations, and the difficulties and responsibilities of armies engaged in occupying belligerent territory. The book closes with chapters on UN peace operations, maritime interdiction operations frequently relating to anti-narcotics or anti-terrorism efforts, weapons of mass destruction, and defense support of civil authorities in natural or man-made disasters.

The various authors whose work is shown here demonstrate a great depth of knowledge about their material and appear to be conscious that they are writing to an audience that is likely to be familiar with the basics about military law.  The style of the book is professional as well as academic in nature, and the detail provided and nature of the materials discussed would indicate that the authors are aiming this book at an audience that includes policymakers, students of contemporary diplomatic and military history, as well as line and staff officers that are called upon to follow applicable military law in their operations.  The greater one’s context and familiarity and interest in the contemporary operational and political pressures that America’s armed forces face, the more one will likely get out of this book, which is not written for a wide and general audience but rather for an audience that is directly impacted by the role of law and treaty obligations in shaping the planning and execution of military operations of diverse types. Some of the discussions involve a great deal of historical analysis, such as the role of scandals in shaping the restrictions on intelligence law and the historical analysis of chemical and nuclear weapons as well as laws governing the conduct of armed forces.

Of particular interest to many readers will be the way that the authors seek to balance a wide degree of tensions, including a tension between more timeless principles of military effectiveness where operations are judged by their outcomes and the more relevant contemporary concerns about military operations—in previous generations environmental law would not likely have had the same importance as it does at present, to give but one example, nor would cyberspace law have been as relevant. To their credit, the authors themselves avoid entering directly into partisanship, although the general approach of the writers in being in favor of scrupulous adherence to treaties that have not been signed by the United States and to frequently restrictive views of operations relating to the behavior of judge advocates and those responsible for gathering intelligence or regarding military involvement in defense of civil authorities suggests a view of restraint for the military that is at odds with a substantial amount of the political leadership as well as the larger population of the United States. While many readers will no doubt find themselves in disagreement with some of the perspectives contained in this book, the detailed analysis as well as citation of the book’s materials will make it a worthwhile resource concerning the relationship between the law and military operations that will be widely appreciated and applied.