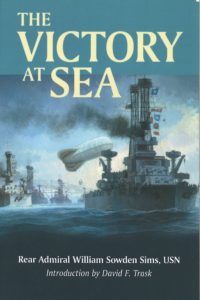 The centennial of the United States’ entry into the First World War provides an impetus for reviewing major events of the conflict and revisiting contemporary accounts. The Victory at Sea, Admiral William Sowden Sims’ account of U.S. Navy operations during the war, provides both interesting historical detail and some important lessons for contemporary military leaders.

Written in collaboration with Burton J. Hendrick, the book was originally published by Doubleday in 1920 and won the 1921 Pulitzer prize in history. This review addresses the 1984 edition published by the United States Naval Institute, which includes an introduction by David F. Trask, a former chief historian of the U.S. Army Center of Military History and professor of history at the State University of New York at Stony Brook.

As Sims notes in the preface, The Victory at Sea is not an operational history of the Navy’s role in the war. Instead, Sims provides an account of the anti-submarine campaign around the United Kingdom, the details of which were not well known due to the strict security measures in place during the war. He covers the risks to Great Britain of the mostly successful German campaign of unrestricted submarine warfare, British and American anti-submarine warfare (ASW) operations, and the issues surrounding the establishment of the convoy system in extensive detail. Sims also addresses the functioning of the U.S. Navy’s headquarters establishment at London House and the ASW efforts of both allied submarines and aircraft.

Beyond the war against submarines in the Atlantic, Sims describes the activities of the U.S. submarine chaser squadrons operating in the Adriatic, the establishment of the North Sea mine barrage, efforts to transport the American Expeditionary Force to France, and the Navy’s operations on land. The land operations took the form of mounting 14” naval guns on railroad carriages. Although the Germans removed their large caliber guns before the railroad guns went into action, they supported the American offensive up to the end of the war.

Sims was assigned to the Naval War College when, in March 1917, he was directed to secretly travel to London to establish a liaison to the Royal Navy in anticipation of the United States’ entry into the war. Accompanied by one aid, Admiral Sims attempted to avoid attention by traveling in civilian clothes under an assumed name, precautions that were not entirely successful as the steward tending his cabin reported the discrepancy between the names of the passengers on the ship’s manifest and the monograms on their pajamas to the ship’s captain.

Arriving in England on April 9, 1917, a week after President Wilson’s request for a declaration of war, Sims was surprised to learn that the optimistic public assessments of the British Government were not matched by the leadership of the Royal Navy. He recounts a meeting with the First Sea Lord, Admiral John Jellicoe, on his arrival in London when Jellicoe predicted that the Germans win the war unless they reduced merchant ship losses, and the Royal Navy did not have a solution.

With solutions found, Sims provides an entire chapter describing the challenges and issues associated with reinstituting a convoy system for merchant ships. Of particular interest to anyone involved in theater ASW, Sims also addresses the question of the most effective employment of the limited escorts that were available (escorting convoys rather than independently hunting for submarines), and the use of signals intelligence and a theater-wide operational plot to route convoys around German submarines.

Beyond his discussion of naval operations, Sims addresses some of the political aspects of his assignment. With responsibilities for coordinating the activities of all U.S. Naval forces in Europe, he was the Navy’s equivalent of General Pershing. However, unlike Pershing’s efforts to retain the cohesion and independent command of the American Expeditionary Force, Sims worked equally hard at integrating the U.S. Navy’s efforts with those of the Royal Navy. As he explains, “I early took the stand that our forces should be considered chiefly in the light of reinforcements to the Allied navies, and that, ignoring all question of national pride and even what at first might superficially seem to be national interest, we should exert such offensive power as we possessed in the way that would best assist the Allies in defeating the submarine.”

While Sims described his views on the ASW campaign in detail, he does not explicitly address his differences with the Navy’s leadership regarding the Service’s readiness for war.  Sims’ disagreements with the Secretary of the Navy, Josephus Daniels and Chief of Naval Operations Admiral Benson were the focus of very bitter hearings before a Senate Investigating Committee in January 1920. However, as Professor Trask points out in his introduction, Secretary Daniels receives only passing mention in the book, and Admiral Benson is completely omitted. This omission may be due to the fact that Sims was still on active duty when the book was written.

The Victory at Sea is both an informative and very readable book and the Naval Institute has performed an important service by keeping it in print.