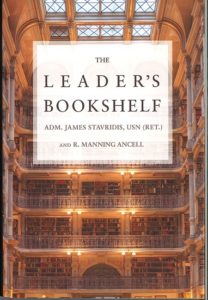 Advisory books like this are often difficult to organize and write, no matter who the author is. Post-publication comments always include books that were not noted for whatever reason the correspondent expresses, and this new title is no exception. Although a relatively interesting list of some 50 books, with various related comments from the author and contributor for each book, questions arise about why there is one aviation title. The excuse that the authors are not aviators is a very weak explanation—and their ignoring several aviation movies related to the books they review does not help support their otherwise helpful comments.

I can’t help but think of several appropriate aviation-related titles, such as the iconic 1948 novel Twelve O’Clock High (as well as its equally outstanding 1949 movie). The author was a washout from naval aviation flight training who subsequently got his Army Air Force wings.

The books of the trilogy by the late U.S. Air Force Colonel Jack Broughton, Thud Ridge (1969, Going Downtown (1988), and Rupert Red Two (2008), actually published in reverse of their actual chronological order of their biographical sequence. These three books are by an acknowledged highly decorated combat leader of an F-105 group in Vietnam, who, in effect, sacrificed his stellar career—he should have reached general rank—to protect his junior officers who had fought their war as he believed they should.

The inclusion of such an esoteric work as Foundation Trilogy (page 169) makes me wonder. I tried reading these three books as a young adult in my twenties, who was interested in an occasional detour into science fiction. However, I found them to be boring and hard to understand, and I left them before I could finish them as a waste of time and interest. Their place in the hierarchy of sci-fi fiction still mystifies me, even as I am approaching my senior years.

It is interesting, even humorous to recall that a few of the high-ranking contributors (including a few Marine generals) now serve in their incredibly difficult roles as advisors to the president. The authors’ preface says, in part, “…there are countless books that extoll the virtues and ideas of leadership…there are relatively few books that provide leadership lessons in a broader format.” I wish the authors of this new book would have remembered what they had written.

Thinking of what The Leader’s Bookshelf could have included in place of what I have noted and rejected, it is still an unusual collection of suggested books, albeit coming from a limited group of contributors, that, for the most part, any serviceman, no matter what rank or level of experience, might consider reading and adding to his professional library. There is a much larger group of books eminently worth considering for other sources, all offering a much more profitable encyclopedic reference on leadership that any age group could take to heart.

Commander Mersky is a reviewer of military aviation history.