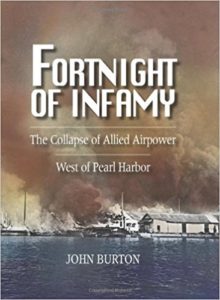 Since Billy Mitchell’s sinking of the “Ostfriesland” in 1921, the US Army Air Force argued the case for the power of large bombers to defeat naval forces. At the beginning of WWII, British, German, Japanese, and Italian air forces shared this view Thus in 1941, the US saw the quickest and cheapest way to reinforce the Philippines against Japanese attack was to base a substantial force of its new B-17 “Flying Fortress” bombers there. On Dec. 8, 1941, though warned by Pearl Harbor, nearly half of this force was caught on the ground and destroyed pre-emptively by the initial Japanese air attack. (40% of US fighter strength was also destroyed) Though it fought hard, with great sacrifice, and to some effect, the USAAF failed disastrously in its role as the first line of defense for the Philippines.

Ever since, the Dec. 8 attack has been the subject of heated controversy, much like Pearl Harbor itself. Perhaps the typical view is expressed by John Gordon in “Fighting for MacArthur; the Navy and Marine Corps’ Desperate Defense of the Philippines” (2011). “Although the exact sequence of events during the morning of 8 December will never be known (historians have tried unsuccessfully for years to reconcile the statements of MacArthur, Sutherland, Brereton, and other key Army Air Force personnel) there is no question that senior Army leaders in the Philippines were completely responsible for the disaster. Indecision at the highest levels resulted in hours of delay that cost the defenders of the Philippines dearly.” But is this true? Or do the lessons of this campaign show that no different and more timely command decisions could have enabled the Army Air Force to have played an effective role? “Fortnight of Infamy” suggests that this widely accepted view is completely wrong. Believing that if the Americans struck first they could have avoided disastrous defeat means continuing to believe in the same overestimates of the power of bomber, the materiel and expertise of the USAAF, and the effectiveness of fighter defense without radar and direction by voice radio, all of which led us to the deployment of the B-17’s in the first place in the forlorn hope they could save the Philippines.

For those who are interested in this controversy – or who are, like this reviewer, deeply interested in the evolution of air defense – this book is required reading. But it should be pointed out that this book is by no means a dry, abstract analysis of these questions. It is exquisitely researched and grippingly told history. These two weeks were the USAAF’s moment of surpassing heroism, all the greater for facing hopeless odds, much like the men of Pearl Harbor. It will be of interest to anyone fascinated by flying and air combat and covers the air campaigns over Malaya and Wake Island as well.

That said, what were the unperceived flaws in the Philippines’ air defenses that left it crippled yet hopelessly overconfident till the moment of the attack?

First, the B-17s. “Under sustained and ferocious attack by cannon-armed Zeros, a number of the durable bombers had been shot to ribbons and still made it home to their bases; only two of the planes had been forced down – those flown by Captain Colin Kelly and Lieutenant Jack Adams.” On the other hand, they did no damage to the Japanese; bombing from high altitudes with their secret Norden bombsight, they made close to zero hits on Japanese ships, landing sites, and ground forces. And had they bombed Japanese airbases in Formosa first, could they have destroyed the Japanese bombers pre-emptively, the way they, in fact, destroyed us? Not very likely. Burton notes that no B-17 reconnaissances had been conducted over the Formosan bases, and we didn’t know where the enemy bombers were located.

Second, the air wars over the Philippines and Malaya showed what had already been proven in Poland, France, and the Battle of Britain, that effective fighter defense is impossible without radar early warning and voice radio fighter direction. Our alternative was wasteful but inadequate standing fighter patrols over every target, easily overwhelmed by attackers. The one useful radar at Iba Field was destroyed in the first attack, and voice radio was so bad that the attempt was made to direct fighters by a simple code of signals on their Morse radio.

Third, daytime air superiority is determined by a series of fighter-on-fighter individual combats; day fighters MUST be competitive in performance against their opponents. The P-40 was a good fighter in many respects, but the lack of supercharging and oxygen limited it to lower altitudes, it was too heavy to dogfight with the Zero, and its guns were prone to jamming (much like the RAF Buffaloes in Malaya).  It must be pointed out that we expected no enemy fighter presence at all over the Philippines.  Only the huge shock of the phenomenal and unsuspected range of the Zeros made this possible in the first place.

Fourth, as effective as the Japanese bombers were, the majority of our aircraft lost were destroyed on the ground by strafing fighters – as was the case at Pearl Harbor. This is an aspect of these air raids that was perhaps very unexpected, something made possible by carrier raids or the super long range of the land-based Zeros. Certainly, no such tactic was possible for the Germans in the Battle of Britain, due to the short range of its Me-109 fighters.

Fifth, the typical experience of the US Army during peacetime is to be shrunk to cadre status by Congressional penury, and to rebuild nearly overnight in the face of emergency – and the Air Force between the wars was no exception.  As Burton puts it: ”Ironically, though the United States had given birth to aviation, its air forces were practically at the bottom of the barrel when war broke out in Europe in 1939.  In spite of a conscious preparation for involvement in that European war, the Army Air Forces (AAF) was still appallingly understaffed and underequipped by December 1941.” Or as Brereton put it:”We were definitely a third-rate air power…”

Finally, as to that indecision at the top, Burton notes that during the three hours delay after Brereton requested permission to bomb Formosa, MacArthur was closeted with Manuel Quezon, the president of the Philippines. Quezon’s support for American interests was conflicted, as well it might be – the turn-of-century American occupation of the Philippines required military conquest and suppression of an armed independence movement. Now he feared the effects of bringing war and Japanese occupation to his country and seriously doubted the US would commit the forces necessary to defend it successfully.  Later on, he was similarly conflicted about fleeing his country to establish a government in exile as MacArthur and Roosevelt wished. In the event, his decision to do so was probably wise; later the Japanese considered granting a “neutral” Philippines an illusory independence, and those politicians Quezon left behind in his place were later branded as collaborators. And if Quezon refused to support a war until his country was attacked was that any different from the isolationist American people? Retaining Quezon’s support and cooperation was very important to MacArthur; with it probably went the support of the Philippine people. Thus Burton suggests that it was not indecision, but a conscious choice by MacArthur not to strike first.

Everyone who is interested in this controversy needs to read this book – most of all those who remain dubious about the propositions stated above. Sometimes with WWII, as with all history, the “myths” and “folklore,” the explanations of events rooted in the popular mind, are so powerfully entrenched as to be a lasting barrier to understanding. But what’s truly important is understanding what happened and what the men there really experienced, even if it was suffering, loss, and defeat. Sadly, the air war over the Philippines will never be called the USAAF’s “finest hour” –  because we lost. But for that reason itself, it is their moment of greatest courage and surpassing heroism.