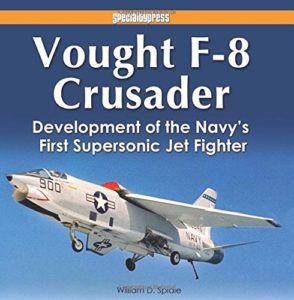 Vought’s sleek, high-performance fighter remains an object of fascination and appreciation many years after it left service with the U.S. Navy and Marine Corps, as well as the French Aeronavale and the Philippine Air Force. I, myself, have written four books, and other aviation writers such as Barrett Tillman have written their F-8 histories and articles. This latest effort is an unusual book in that its author chooses to limit his attention to the Crusader’s early years, mainly its original fighter and reconnaissance prototypes. A different concept but one which allows him to indulge in a wide-ranging discussion of the aircraft’s first years. He does devote a chapter to the Crusader III, the large and powerful shark-like development that came from the F-8. Very little about the Crusader’s colorful Vietnam service, which is just as well because there is so much of that coverage already available.

Starting with a quick overview of Vought aircraft following World War II, Spidle describes the design and concept of the XF8U-1, the initial designation of Vought’s new worldbeater.  (Its designation, along with those of all U.S. military aircraft in October 1962, was changed to XF-8A.) The many proposals and their initial drawings and project numbers show how the pleasing shape of the Crusader finally gelled and how the F-8’s hallmark variable-incidence wing and its “droops”—the leading edge and trailing edge panels that permitted the Crusader to take off and land at lower speeds–developed.

The series of technical descriptions for various portions of the overall designs—the wing, the unit horizontal tail (UHT), hydraulics, relationship to the less-than-successful Cutlass—are not the usual descriptions of a new aircraft. The write-up of the F8U-1’s under-fuselage rocket pack—something like what the USAF’s F-86D carried—which included 32 2.75-inch rockets for various uses, is the most detailed I have seen. Although included in the eventual production run of the F8U-1 (later F-8A), the pack was deleted in the F8U-1E (F-8B), and no one mourned its loss.

The author’s lack of specific service lingo and fact is minor but somewhat annoying. For instance, on page 116, he refers to “the Navy or Marine Corps song.” I assume he is talking about “Anchors Aweigh” and the “Marine Corps Hymn.” I’ve never heard either called a “song.” I bet it made a few retired leathernecks wince. Glad my AOCS DI isn’t here to read it.

There are many great photos of the F8U-1. The author had unprecedented access to Vought’s photo library, and he took full advantage of it. Every stage of the new fighter’s design and prototype activities is shown, in black-and-white and color. I’ve read a lot about the Crusader’s first flights but never in detail in the text and photos of this book.

John Konrad, Vought’s chief test pilot, who took the Crusader up for its first flight appears in several photos as do personalities of the company and military groups. Konrad appears in an especially candid shot just after the first flight, still in his flight suit, as he discusses his impressions of the new plane and still in his oxford-style shoes and striped socks! Well, he was, after all, a former USAAF B-24 pilot. The photos show several interesting color schemes and markings for the Crusader prototypes—fuselage stripes, vertical tail markings and checks all at once. A modeler would have a field day.

The book also offers good coverage of various F-8 programs such as carrier work, as well as the loss of one of the prototypes and test pilot Konrad’s ejection, the first of many for the Crusader. Again, the spread of Vought photos is among the best I have seen. The appearance of the first F8U-1P (later RF-8A) will be of interest to many former photo pilots as well as ground crewmen, who worked so long to keep their aircraft mission ready.

The chapters are short, allowing display of the photos. The prototype Crusaders set several performance records and received close media attention and coverage. Black-and-white and color pictures show off the Navy’s new fleet fighter and recce platform. The Crusader garnered the prestigious Collier Trophy, established in 1911. Perhaps the best-known record was the supersonic transcontinental flight of the U.S. in July 1957 by then-Marine Major John H. Glenn, who flew from California to New York in three hours, twenty-three minutes and eighty-four seconds. Of course, Glenn gained great fame as a Mercury astronaut and U.S. Senator.

One of the more unusual aspects of the Crusader story is the one and only F8U-1T (later TF-8A) “Two-Sader,” a highly modified F8U-2N (F-8D) outfitted with a second seat. The TF-8A served long and well until July 28, 1978, when it crashed during a flight with a Vought test pilot and a lieutenant from the Philippine Air Force, which was in the process of buying refurbished Crusaders. The well-photographed two-seater was never replaced but shown in this new book.

The book also devotes space to the French Crusader, 40 of which (F-8Es) was bought over and served until the early 1990s, going through several refurbishments and modifications, including those necessary to use French munitions. The French loved their “Cruze” as much as their American compatriots loved their “’Gator.” There are also excellent color photographs of Philippine Air Force Crusaders, which were refurbished F-8Hs.

A surprising bit of information is that apparently the Swiss, Japanese and British were at one time interested in acquiring F-8s and suitable proposals were prepared. However, these three countries chose other aircraft. Once again, rare and beautifully reproduced Vought black-and-white and color views show the Crusader III in all its somewhat futuristic splendor. One can only imagine how six Blue Angel F8U-3s might have looked with the team’s gorgeous blue-and-gold markings.

The book’s final chapters discuss the F-8’s work with the National Air and Space Administration (NASA) and how the first prototype now looks in the Museum of Flight in Seattle, Washington.  However, as a two-tour alumnus of the Washington, D.C., Naval Air Reserve squadron VFP-306,  I wish the author’s discussion of the refurbishment of this first F-8, long buried in storage at the National Air and Space Museum’s Silver Hill facility in suburban Maryland, had  mentioned the hard work by the officers and men of the U.S. Navy’s last Crusader squadron, VFP-206,  just in time to be displayed with the squadron’s last operational RF-8G before the squadron’s disestablishment in March 1987. Iconic test pilot John Konrad was there to shake hands with the last U.S. Crusader commanding officer, Cdr. Dave Strong, who as the then-executive officer of the squadron had also made the last ejection from an American Crusader on March 11, 1985.

Despite that perhaps unintentional omission, this book is a fine effort and for the price, represents excellent value for the Crusader enthusiast and former aviators and ground crewmen.

Specialty Press is offering a 30 percent discount on the book until December 31, 2017, when you place your order using coupon code “F8” on their website or by phone. Visitwww.specialtypress.com/Vought-F8 or call 1-800-895-4585 to place your order.