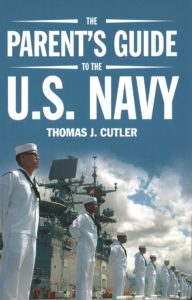 In an era where service in the United States military or reserves is no longer a general expectation of a large body of citizens, there can be a vast gulf of ignorance and misunderstanding between the military and the families of young volunteers.  At least as far as the United States Navy is concerned, this book provides a way of bridging that gulf by providing thoughtfully written information about the navy directed to outsiders from an insider’s point of view. This is a book that will likely be appreciated by a wide variety of parents and other relations who do not know a great deal about the military but who have a loved one serving in the navy and who want to understand the ways of the navy at least well enough to be able to provide encouragement and support to their seaman or young officer.

Retired lieutenant commander Thomas J. served as a gunner’s mate second class on a wide variety of vessels including patrol craft, cruisers, destroyers, and aircraft carriers.  Having experience in the military both as an enlisted seaman as well as an officer, as well as his more recent experience as a fleet professor of strategy and policy with the Naval War College and the Gordon England Chair of Professional Naval Literature at the U.S. Naval Institute, the author is well-equipped both to write about the navy as an insider and to be sensitive to the point of view of those who are outside of the military.  The author makes no apologies for writing with such a positive view of the Navy and is open about his pro-naval bias, a bias which is understandable given his perspective and experience.

Regarding its contents, this book offers a very detailed and informative look at life in the contemporary navy.  The author begins with a list of illustrations and figures and a brief personal introduction that gives the author’s perspective and approach to writing about the navy.  After that, the author discusses joining the navy and what it is like for those who enlist as well as those who enter service as officer candidates.  After this, the author discusses the benefits of serving regarding pay and other benefits, with a special focus on education, childcare, and benefits for family members.  The third chapter is devoted to a translation guide where the author explains the jargon of the navy so that it can be understood by those who lack experience with terms relating to ships and the Navy as an institution.  After this the author writes about navy missions and the heritage of the Navy, looking at the broad variety of tasks that the Navy is called upon from combat to humanitarian assistance and scientific exploration.  A discussion of the detailed and complicated organization of the United States Navy follows in looking at fleet command structure as well as the various regional commands of the military.  After this the author discusses navy titles, giving plenty of illustrations and examples about the forms of the titles and what they mean and also even giving information on how people holding various titles are to be addressed.  Following this comes a practical guide to reading uniforms filled with images so that the various badges and insignia can be understood.  The last two chapters of the book focus on the ships and aircraft that the United States Navy operates at present, and there are five appendices that give a glossary of navy terms and abbreviations, some sailor attributes from How We Fight, some advice on proper protocol when visiting the ship of a family member or loved one, some useful suggestions for further reading, and a detailed discussion of navy ratings for enlisted personnel.

By writing for parents and other friends and relatives of those who have enlisted in the Navy, the author has chosen for himself a difficult task but manages it with considerable skill.  The book manages to include much information that is timely but also manages to avoid giving too many specific details about matters (like pay, for example) that are subject to change quickly.  This is a book that, with proper updating, is likely to remain a valuable resource for a long time. It appears that this was the author’s intention, to write something that would not be merely a book for the moment but one that could be read profitably for many years, and this goal has been met.  This book stands as a beautiful and informative book that gives the reader a firm background in how to be a knowledgeable civilian concerning the affairs of the Navy.  Whether as encouraging friends and relatives to someone serving in the Navy or as someone who can be informed in their perspective of the Navy, this is a book that has considerable potential in alleviating a great deal of the misinformation and lack of understanding that most people have of the Navy and its operations in our contemporary society.  Given the role that people in the home front have in terms of the morale of those who serve in our military, this book is a timely effort in improving the ability of the home front in supporting the brave men and women of the United States Navy.

Nathan Albright resides in Portland, OR.