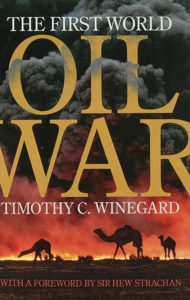 In his latest book, The First World Oil War, Oxford Ph.D. and Colorado Mesa University professor Timothy C. Winegard argues that the Great War was the first time in history that territory was conquered and occupied intentionally to possess resources, particularly oil, necessary for waging war. This fact was necessary not only to win an ongoing war of attrition but also because of the possession of these resources while denying them to other powers, would be of strategic advantage in the future.

Many readers are already familiar with that basic premise based on Daniel Yergin’s Pulitzer Prize-winning, The Prize: The Epic Quest for Oil, Money, and Power. So, the question is: what does Timothy Winegard offer a potential reader that is new and inviting?  Winegard builds on that edifice to explain how the “quest to possess the petroleum prize” led to some “enigmatic and altogether strange sideshows of the war.” (pg. 7) The campaign Winegard singles out for special consideration is Brigadier General Lionel C. Dunsterville’s secret mission to seize the oilfields at Baku on the Caspian Sea, or, failing that, to destroy them so that the enemy could not benefit from the oil.

Lionel Dunsterville was a Colonel posted in India for most of the First World War, but as the fighting drew on and consumed resources, the decision makers in London began to consider how they might gather more resources for the war effort and deny them to their German foe. The outbreak of the Russian revolution in late 1917 and subsequent capitulation presented an opportunity for Germany and Turkey to seize oil resources near the Caspian Sea. Colonel Lionel Dunsterville was knowledgeable of the region and spoke many languages, including Russian, German, and Pashtu. He seemed a perfect fit for what the campaign planners in London contemplated. The War Office recalled Colonel Dunsterville from his post overseas, made him a Brigadier, tasked him with cobbling together a select group of proven fighting men, and then to proceed to Baghdad where the military authorities were to provide him the resources he needed for his mission. From Baghdad, he and his force would move into the Caucasus region where he was to recruit, train, and lead an army constituted from the Armenian population. It was thought that the Armenians would be eager to fight the Turks as revenge for and to prevent further genocide, so they would be readily recruited and could be used to forestall any combined Turkish-German advance into the Caucasus. If that endeavor were successful, the United Kingdom could subsequently secure Baku and its massive oil infrastructure thus preventing the German war machine from acquiring this precious resource and simultaneously preserving it for the British Empire. Neat. Tidy. Simple. Of course, the actual campaign, as Winegard explains with lively and engaging prose, was anything but simple.

The First World Oil War begins with several chapters that set the background of the progress of the war, strategic issues, and current operations. This is history that is well known, but the author builds on it so the reader can understand the context of the Mesopotamia Campaign and the rationale for sending General Dunsterville and his men, who became known as Dunsterforce, on their mission. Many historians consider all the theaters outside of Europe as sideshows to the war. Using that logic, the Dunsterforce mission would be only a sidebar to a sideshow in the war, but Winegard carefully explains the rationale for the decision to send Dunsterville and the intended strategic impact of his mission. The middle chapters are the focus of the book dealing with the little-known aspects of the mission. The final chapters discuss the carving up of the Middle East, and creation of nations that make sense only by the logic of including known oil reserves and the routes for exporting that commodity to Europe.

The Dunsterforce mission has been documented before in Dunsterville’s memoir, The Adventures of Dunsterforce, published in 1920, as well as Operations in Persia, 1914-1919, as part of the official history of the Great War based on official documents series compiled by F. J. Moberly. The weaknesses in these previous works are that they represent the perspective of an individual who either has a bias in favor of burnishing a military reputation, or the bias of the “official” history that casts British decisions in a favorable light. Winegard presents a fresh perspective based on significant archival research and the letters and diaries of participants in the mission. The men that made up the Dunsterforce came from all over the British Empire, hence Winegard’s research required visits to archives on several continents. The result is an account that shows the pluck of the men involved, a willingness to do their duty, but also men of sober judgement that at times questioned the wisdom and feasibility of the whole enterprise.

To set the background for the Dunsterforce mission, Winegard needed to address the Armenian Genocide. He handles this prickly topic in a balanced, and fair manner. One is informed of the reprisals, recriminations, and the depredations on both the Armenian and the Muslim populations without excusing the genocide. Part of the failure of Dusterforce was due to the Armenians’ preference for avoiding depredation over a desire to engage in reprisals. Moreover, some of the success of the mission is highlighted in the force’s herculean and effective provision of humanitarian relief.

The book is an enjoyable and informative read. Scholars in the history of the Middle East and the Caucasus region will probably find this account a refreshing alternative that reinforces much of what they already know, but just about everyone else will find it eye-opening. It’s a good book that synthesizes many ideas and explains how sometimes war creates situations that have a logic all their own.