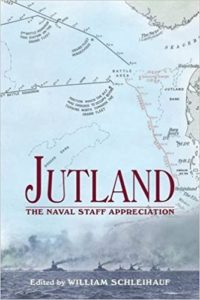 This Staff Appreciation was an official study directed to explain and analyze the maneuvers of the British Grand Fleet at the Battle of Jutland. As students of that period are aware, major controversies erupted over the way the battle was fought. Serious friction between the two senior British Admirals, Jellicoe and Beatty, on the tactical conduct of the battle worsened after Beatty became the First Sea Lord in the 1920s.

Originally directed in 1920 by Beatty, the study was completed in 1922 and 100 copies printed. The document was, in modern terms, “closely held” until 1930 when a new First Sea Lord ordered all copies recalled and destroyed. The editors located the four surviving copies to create the volume reproduced here including some of the marginal notes by Beatty and Jellicoe. These historians have provided an editor’s Introduction and Afterword as well as adding appendices of Jellicoe’s directives and reports absent from the original.

The animus is evident in the writing and the comments. No band of brothers here. The Appreciation openly accuses Jellicoe of timidity resulting in a “failure to engage”. The editor’s notes make clear some actions were omitted from the detailed descriptions in the Appreciation because they reflected poorly on Beatty (e.g. the Battle Cruisers second run south, closing when he had the gun range advantage and inept use of the best ships in the battle, the battleships of the Fifth Battle Squadron).

While the diagrams, redrawn for this edition, are much superior to those in Andrew Gordon’s masterwork The Rules of the Game, in all other aspects there is no comparison in the narrative, observations and analysis of actions of many participants or in analysis of not only tactical maneuvers but technical aspects affecting the fleet’s performance. The Appreciation’s only advantage, brevity, 208 pages, while less daunting but are substantially less rewarding than Gordon’s 601 pages. Comparing the two with the aid of the editorial commentary by Schleihauf and McLaughlin, the jealous oversight that propelled this study becomes evident.

The movement diagrams contain details not easily found in other works. The layouts show the difficulty of positioning (no one really knew where they were), the impact of visibility limits on detection and observation, and the need for line of sight communications. That positions transmitted by radio were up to 60 miles off in latitude and longitude may be shocking to today’s navigators but are unremarkable to those who sailed before there was GPS. Visual contact was necessary to certify the relative positions of the opponent. The importance of some facets not explained in the text can be seen in these plots. For much of the first part of the battle, the cruiser Southampton managed to maintain visual contact with the German High Seas Fleet and with the main body of the British Fleet simultaneously – a perilous but vital ingredient that lead to the first crossing of the “T.”

Unlike the practice of learning organizations in a post-activity analysis (Lessons Learned), the Appreciation’s focus on tactical maneuvers and operational communications slides by some serious issues. True analytical detail of real short-comings is hard to find. Few technical issues are addressed in the Appreciation, authored by historians rather than engineers. For example, the theory promoting high rates of fire resulted in storage of propellants in turrets that lead to the loss of three battle cruisers is ignored. While communications were justly savaged, serious discussion of the limitations of radio is missing. The effect of battle damage to upper works is ignored but the fragility of antennae must have made those damages crippling. (Gordon reports the HF antenna on Beatty’s flagship, HMS Lion, was shot away.) Was flag hoist used not just because it was customary but because the signals officers knew of the unreliability of shortwave (HF) radio?

The editors’ Afterword found the original author “…  had difficulty seeing beyond his own particular view point.” Accusations that Jellicoe was timid and strictly on the defensive seem to the editors to be unjust, unfounded and patently untrue. Their notes make clear that portions were omitted from the Appreciation – omissions occasioned by objections by Beatty.

The book contains a superb Afterward by the modern writers that shed light on much of the controversy. This Afterward is an excellent discussion of the battle and coupled with their editorial notes is the factual analysis that is missing from the Appreciation. While concise, the commentator/editors provide an easily read analysis for anyone who has a general interest in the movements in the battle. When coupled with the BBC’s documentary available on YouTube, the Afterword essentially provides a superb Cliff Notes or “Jutland for Dummies.”

Admiral Holland, former Vice President of the Naval Historical Foundation is the Editor in Chief of the Foundation’s book, The Navy.