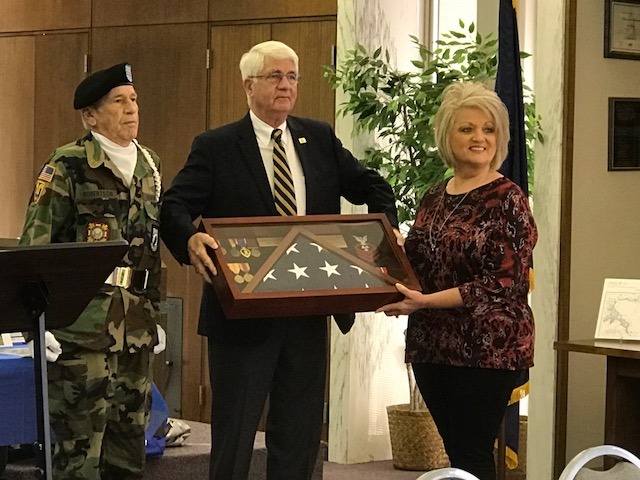 In early 2016, the Naval Historical Foundation received an unusual request from Ms. Brianna Tirado of San Diego, California.  While working in a county office there, Ms. Tirado came across a Navy medal in their “lost and found.” Nestled in a small red box was a Navy and Marine Corps Medal with the name “Ensign Lee R. McDonnell, USN” and “Feb. 16, 1945” engraved on the back. There was no indication of where it had come from, or when or why it had ended up in that office. Ms. Tirado, whose grandfather had served in the U.S. Navy, understood the significance of such a medal and that it concerned a World War II naval officer. Reaching out to NHF, she didn’t realize that staff members had a track record of reuniting WWII naval artifacts with appropriate family members, including dog tags lost on a Pacific beach, a wallet lost in a New Zealand couch, and a naval aviator “wings of gold” insignia from an airplane crash site in Virginia. NHF pledged to return this medal to either the family or hometown of Ensign McDonnell. The latter event took place on November 18th in the town hall of Jena, Louisiana.

The search was not an easy one, with research taking over a year to unravel the story of the medal. We found that Lee Roy McDonnell was born on July 31, 1911, in Good Pine, LaSalle Parish, Louisiana and enlisted in the U.S. Navy on July 2, 1929.

As early as September 1941, McDonnell was an enlisted Machinist’s Mate assigned to destroyer USS Benham (DD-397), part of the U.S. Navy’s Pacific Fleet. Benham took part in the Doolittle raid on Tokyo in April 1942, the pivotal Battle of Midway in June 1942, the landings on Guadalcanal and Tulagi in early August, and the Battle of the Eastern Solomons in late August 1942. On November 15, 1942, during the Naval Battle of Guadalcanal, Benham was hit by a Japanese ship-launched torpedo, shearing off her bow forward of the bridge. The crew, including McDonnell, were rescued by another destroyer before the ship went down.

McDonnell returned to the United States where he joined the pre-commissioning crew of destroyer USS Wadsworth (DD-516) at Bath Iron Works, Bath, Maine.  Commissioned on March 16, 1943, at the Boston Navy Yard, Wadsworth headed for the Pacific Fleet and was conducting combat operations by August 1943. On November 1, 1943, a near miss from a Japanese bomb killed two Wadsworth sailors and wounded nine others—but spared McDonnell. 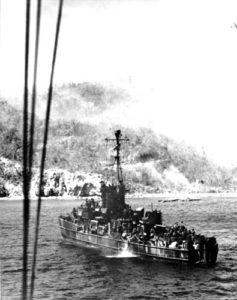 Promoted from his permanent enlisted rank of Chief Machinist’s Mate to the temporary officer rank of Ensign effective December 1943, McDonnell detached from Wadsworth in February 1944 to proceed back to the US for amphibious training. In July 1944 he and four other officers and 65 enlisted men completed their training at the Amphibious Training Base, Solomons, Maryland and were ordered to report to the Supervisor of Shipbuilding at the George Lawley Shipyard in Neponset, Massachusetts for the fitting out of USS LCS (L)(3) #7. McDonnell was assigned as the engineering officer. They built these multi-purpose amphibious ships in large quantities, with the Lawley Shipyard alone producing 47 of this 103-ship class.

Landing Craft Support (Large) were commissioned U.S Navy vessels designed to support amphibious landings with their armament that enabled them to deliver close-in fire support to the troops landing on the beaches. Used solely in the Pacific theater, they took part in the campaigns for the Philippines, Iwo Jima, Okinawa, and Borneo. Known as the “Mighty Midgets,” they were 158 feet 6 inches long, with a beam of 23 feet, 3 inches. They displaced 250 tons, with a draft of 4 feet 9 inches forward and 6 feet, 6 inches aft. They could steam 5500 miles at 12 knots, with a top speed of 15.5 knots from their eight General Motors diesel engines. They were armed with 40 mm and 20 mm guns, .50 caliber machine guns, and ten Mk. 7 rocket launchers.

LCS(L)(3) #7 was commissioned on August 29, 1944. And soon after that, began her transit from the U.S. east coast, in company with her sister ship #8, to the west coast.By January 1945 #7 was on her way across the Pacific to join the Seventh Fleet for duty. During this voyage, Ensign McDonnell, known as “Mac” to the crew, took command of #7 when the commanding officer, Lieutenant Jack Elder, became ill and had to be transferred for medical treatment.

#7 ‘s baptism of fire occurred in January and February with the liberation of the Philippines from Japanese occupation. On the night of February 16, 1945, LCS(L)(3) #s 7, 8, 26, 27, and 49 were anchored across the mouth of Mariveles Bay, at the end of the Bataan Peninsula, on the west side of Manila Bay, Luzon. They were there to protect three tank landing ships (LSTs) still ashore at the beachhead in the bay. At approximately 3 am local time, the ships were attacked by about 20 Japanese suicide boats, probably based at nearby Corregidor.  #7 and two of her sister ships sank. 73 men on these LCS(L)(3)s were killed or missing, and 49 were wounded. #7 was struck on the port side and sank in 10 minutes. 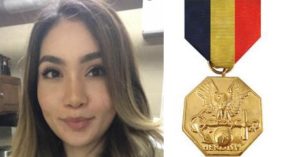 Ensign McDonnell went missing in action that night of February 16, 1945, in the aftermath of the suicide boat attack, as he attempted to save his shipmates. His actions were witnessed by the executive officer of #7, Ensign R. H. Quigley, the senior surviving officer of that ship.  McDonnell was subsequently awarded the Navy and Marine Corps Medal, established by Congress in August 1942 for service members who distinguished themselves by heroism not involving actual conflict with an enemy. For lifesaving acts, the action had to be performed at the risk of the awardee’s own life—criteria that unfortunately applied to McDonnell’s heroic actions. The medal citation read: “For heroic conduct while serving on board the USS LCS(L)(3) #7, when that vessel was attacked and sunk by a Japanese suicide boat in Mariveles Bay, Luzon, Philippine Islands, on February 16, 1945.  Below in his stateroom when the explosion occurred, Ensign McDonnell unhesitatingly proceeded to the number two compartment when he heard men crying for assistance and, courageously entering the blazing area, carried on his valiant efforts to rescue the wounded until the vessel sank ten minutes later.  By his daring initiative, great personal valor and grave concern for the safety of his shipmates at grave risk to his own life, Ensign McDonnell served as an inspiration to the survivors and upheld the highest traditions of the United States Naval Service.”  McDonnell went down with his ship–his body was never recovered. 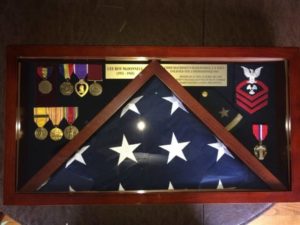 Ensign McDonnell’s wife was Mrs. Selma Charlotte McDonnell. She lived in San Diego, CA and the couple had no children. Selma saw a March 29, 1945, San Diego newspaper article about the loss of #7 in combat, and wrote to the Navy’s Bureau of Personnel desperate to learn of her husband’s status, as she hadn’t heard from him since January. After initially responding to Mrs. McDonnell in early April that the Navy had no news of her husband, less than two weeks later the Navy notified Selma by telegram that Lee Roy was indeed missing in action.  In February 1946, with the war over and no new information on his fate, he was declared dead.  In  June 1946, the commandant of the 11th Naval District, headquartered in San Diego, Vice Admiral Jesse B. Oldendorf (himself a distinguished World War II combat veteran), forwarded to Selma the Navy and Marine Corps Medal, inscribed “Ensign Lee R. McDonnell, USN/Feb. 16, 1945”  with its accompanying citation, to honor his heroism.  Selma remarried after the war.   With no direct McDonnell descendants, Lee Roy’s medal held by Selma probably remained with her until her November 1992 death in San Diego. When it ended up in that “lost and found” bin, Ms. Brianna Tirado went to work.

NHF worked with government archivists, private researchers, and Mayor LaDawn Edwards of Jena, LA–the parish seat of LaSalle Parish, the community into which Lee Roy McDonnell was born.  In preparation for a presentation ceremony to the town of Jena, Lee Roy McDonnell’s Navy and Marine Corps medal was mounted in a commemorative shadow box along with other medals he earned for his Navy service, identified from his service record at the National Personnel Records Center in St. Louis. The medals and his rank insignia as both Chief Machinist’s Mate and Ensign are displayed around an American flag. That flag is the official sized flag used to cover caskets during military funerals and was flown over the Manila American Cemetery in the Philippines on July 2, 2017, the 88th anniversary of Lee Roy McDonnell’s enlistment in the U.S. Navy.  Lee Roy’s name is among the 36,286 names of America’s servicemen missing in action in the Pacific theater of World War II, that are inscribed on that cemetery’s “Walls of the Missing” Memorial. The cemetery, on the east side of Manila Bay, is approximately forty miles from the wreck of USS LCS(L)(3) #7, some 17 fathoms deep at the bottom of Mariveles Bay, where Lee Roy McDonnell and his shipmates rest today.  On Saturday, November 18th Captain Todd Creekman, USN (Ret.), the former NHF executive director who pursued this story, presented the shadow box to Mayor Edwards. Lee Roy McDonnell’s medal, and his story, had come home.