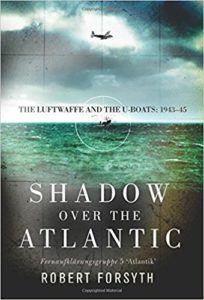 Most readers probably think that by 1943 the U-Boat threat was over. But, it wasn’t. After the so-called Battle of the Atlantic 1940-1942, which pitted German submarines and their crews against the lightly defended Allied convoys, often with disastrous results for the men who manned the lumbering freighters bringing desperately needed material and supplies to European ports, the German wolf packs were still operating ready to continue the fight. However, the Allied effort had, indeed, cut into the heart of the Nazi fleets, and new tactics and equipment were required. This new book covers this resuscitation of the wolf packs.

Ever heard of the Junkers 290 and 390? These huge four-engine aircraft were initially conceived as heavy transports, much like their predecessor, the Focke-Wulf 200 Condor, which caused the Allies, especially the British much anguish in the first years of the war, appearing over Allied shipping as their crews struggled to cross the Atlantic from America to British and European ports. By 1943, the game had changed to an extent, and the Germans faced a better-equipped armada of longer-range and more capable defense force of American and British B-24s and B-17s and British Sunderlands that could protect the convoys. With the loss of many submarines, the Germans did not have the great number of U-Boats they did early on, and therefore, they, themselves, now required better intelligence as to where and when the convoys headed toward Europe.

Admittedly, this is a somewhat esoteric book but certainly one that fills an important gap in late-war knowledge. The FW-200 had served long and well but had reach the end of its usefulness by late 1943, although a few were still flying when there were not enough of the big Junkers for a particular mission. As the narrative progresses, the mission of the various 290 and 390 units became increasingly difficult, even forced to deal with hard-core units of the French resistance that made sapper attacks against the German squadrons still operating on French territory.

Finally, there is coverage of special ops missions, describing the introduction of the Arado 234 jet recce bomber in the last months of the war. Not so much about individual missions, but the strategy of using the new technology of fast jets in attacks against vital bridges to hinder Allied advances farther into Germany.

As the war went on toward its inevitable end, it was obvious the big Junkers planes were not able to do their job. The Allies were on the continent to stay, and the U-Boats were becoming obsolete. The end of the Ju. 290 story is understandably disorganized as the German military, itself, unravels in the final weeks of the European war. It’s a story never told in such detail. There is a folio of interesting photos, as well as several color profiles of these unusual examples of German aircraft design as well as the men who flew them.