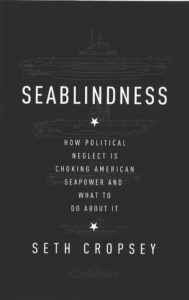 Seth Cropsey’s latest book is an excellent primer on the state of today’s weakened American naval forces and some ways that he thinks can right them now and strengthen them in the longer run to meet the future changing challenges from Moscow, Beijing, and Tehran.

Written for a knowledgeable but not drilled-in all the details audience, the Hudson Institute’s resident expert in maritime affairs is relatively optimistic about turning the noticeable decline in overall readiness in the Navy and Marine Corps around with the arrival of the administration of President Donald Trump.

The book’s appearance is particularly timely.

The rash of at-sea mishaps in the Pacific and aviation accidents this summer are symptomatic of the deterioration of readiness in the deployed forces as well as those at home station. This decline should also be a cautionary tale of the toll of a high operating tempo on the Navy and the Marine Corps, the impact of delayed maintenance to meet regional commanders’ immediate requirements. As a result, the sea services see the modernization of equipment from — aircraft to vessels to camps and stations — shoved-way-to-the-future modernization across a wide swath of programs. The situation is aggravated by continuing cost overruns in delivering nuclear-powered Gerald R. Ford and its follow-on the service variants of the F-35 strike aircraft draining the already limited acquisition accounts.

Expectedly with all this before them, congressional oversight committees have been digging deeply this late summer and early fall on fixing immediate readiness.  Through their authorization role, both committees sent to the floor earlier this summer bills that raised the overall Defense Department budget above administration recommendations, steps that Capitol Hill has taken in the past to correct what it sees as deficiencies in executive thinking and foresight.

But now, those steps to spend more on defense also have to take into account ways to avoid the suicide pact Congress wrote for itself in the Budget Control Act of 2011, a reality that Cropsey acknowledges. He correctly writes it must be repealed.

To get around spending caps, the House has chosen to pump up defense spending through the (ab)use of the emergency supplemental appropriation, innocuously named Overseas Contingency Operations, to pay for modernization of equipment.  It works for one year with the possibility of doing it again in the following years. By calling it an “emergency,” Congress avoids those nasty spending limits.

Most recently, House Armed Services Chairman Committee Mac Thornberry saw serious movement to repeal the bill that created the salami-slice cuts of sequestration that affect domestic and defense programs. Cropsey doesn’t speculate that Congress has the will to repeal the Budget Control Act.  The Tea Party movement of 2010 and the populist surge that carried Trump into the White House do not fall march-step into spending more on defense, and certainly, the Tea Party Republicans and most other members of the GOP caucus are down-the-line opposed to raising taxes.

Among the prescriptions offered in Cropsey’s Seablindness, How Political Neglect is Choking American Seapower and What to Do About It in getting to a 350-ship Navy, a goal of the administration is through the construction of 10 smaller conventionally-powered carriers and 10 additional “small-deck” amphibious ships to carry Marines as well as 12 large surface combatants and 20 attack submarines.

While the former Reagan administration official sees the United States shipbuilding industrial base as having not only excess capacity but presumably the skilled workforce [from ship designers to engineers to welders and electricians to riggers] to deliver those ships, he candidly assesses there is no guarantee that this Congress or a future Congress or a new administration would stick to a plan that would take 30 years to meet.

And when called upon to deliver other types of vessels such as the Littoral Combat Ships, National Security Cutters and Fast Sealift Ship for the armed forces, that includes the Coast Guard,  American shipbuilders have struggled with cost, delivery schedule and sometimes performance in these cases. The switchover he contemplates by yards that once built offshore petroleum drilling rigs to “swiftly produce smaller, less complex combatants” is not necessarily going to happen smoothly or quickly. Complicating matters, the second and lower tiers of the shipbuilding industry in the defense sector have been particularly hard hit by years of shrinking demand.  Many have simply gone out of business, and they, liked the skilled workers in the yards, are not coming back.

A navy is a capital-intensive military force that takes years to build, large sums to operate, even more to maintain as the fleet ages and enemies adapt or a new host of foes arise; and as Cropsey points out several times, its bureaucracy and the bureaucracy and inertia inside the Pentagon and the military industrial base often are sclerotic when it comes to acting quickly or changing direction.

He uses three major scenarios — think along Tom Clancy or Steven Coonts lines but much shorter stories — to make his points about adaptive foes, Russia, China, and Iran, as well as historical analogies especially to the Spanish and British empires allowing their navies to atrophy. Both devices propel the interested reader along.

Cropsey’s analysis and predictions on China’s Peoples Liberation Army-Navy were interesting and provocative. For example, he writes, “So long as China focuses its subsurface forces on the South and East China Sea while the United States maintains it naval commitments to NATO, the security of the Middle Eastern sea lines of communication … as well as reconnoitering the gap between the United Kingdom and Greenland for the passage of Russian combatants into the Atlantic, American seapower must be apportioned globally.”

Speaking only of the submarine force now and with that global approach as the U.S. strategy, Cropsey said China can concentrate its submarine force in the Western Pacific to solidify its questionable claims on reclaimed coral reefs where it has built airfields and ports to dominate the region’s trade routes and hotly contest any American attempt to assert its power there.

Cropsey correctly notes that China at the same time is gradually expanding its surface force and global reach with port access and bases in Pakistan and Djibouti on the Horn of Africa.

More to the future point and threat, “For China, technological innovations comes more readily than it does in Russia,” which under Vladimir Putin has spent hundreds of billions of rubles to modernize all its forces.  One major reason why Beijing can outrun the Kremlin technologically: Its military industrial base doesn’t carry the added weight of it having to remain a [and often the] major job producer for the Chinese economy.

Seablindness presents a strong case for a recommitment to address the nation’s strategic defense with more than one-time fixes. That means long-term federal spending and providing the ways and means to do that.