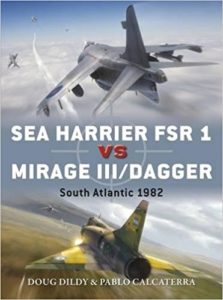 The war in the Falklands was something of a surprise coming as it did relatively soon after the Vietnam War and the taking of Saigon, the capital of South Vietnam by the Communist government troops from North Vietnam in 1975. A remnant of the great British Empire of the late 1800s and early 1900s, the Falklands were under British rule with British citizens who owed the allegiance to the Crown even though they were so close geographically to Argentina, which had always claimed the islands and called them Islas Malvinas. While the British were technically much more advanced than their Argentine opponents, the great distance and time required to assemble the task force and sail it to the South Atlantic put great strain on the men, ships, and aircraft that finally arrived to do battle with the Argentinians. The weather was also not very hospitable for either side. Yet, both countries fielded acceptable forces that fought for more than two months and earned their “enemy’s” grudging respect.

Along with a few RAF Harrier GR 3s (used mainly for ground attack and close air support), the Royal Navy brought some 20 Hawker Siddley Sea Harrier FRS 1s, which gained the unique VSTOL its first combat action along with its first aerial kills. The Fuerza Aerea Argentina’s (FAA) sent in its early model A-4B and A-4C Skyhawks and Mirage IIIs and their offshoot developments, which they called Daggers, combined with a small number of Super Etendards. The delta-winged Mirage and Daggers came from the Israelis, who had used them to such great effect against the Egyptians and Syrians. The Super Etendards came from the French. The A-4s had been purchased from the U.S. years before. During the first four years of the war in Vietnam, the A-4C, with a much smaller number of A-4Bs, had carried a large share of the Navy’s and Marine Corps’ role in the big bombing campaign called Rolling Thunder. This new book, No. 81 in Osprey’s successive Duel series, is mainly concerned with the SHAR (a convenient acronym derived from the initials) and its fight against the French deltas.

There have been quite a few books on the war in the South Atlantic, and they have, to a great extent, been fairly accurate. The book, especially for its size, is one of the best, offering comparisons of the two aircraft, as well as discussing in detail the engagements and describing the great courage of the pilots who met each other in aerial combat during terrible conditions.

The authors are well suited to write such a book. Douglas Dildy is a former USAF F-15 pilot and retired colonel. Pablo Calcaterra is a Canadian citizen originally from Argentina who has written articles on the Falklands and has links to many of the FAA’s aviators who fought in the war. The artists are well known to readers of Osprey books: American Jim Laurier and Gareth Hector, who lives in Scotland.

This new addition to the Duel line deals more with the tactics and formations used by both combatants’ air forces than I have seen in the series. The diagrams of each country’s formations accompanied by the detailed text are quite interesting. It’s amazing how they fought various missions and engagements in the forbidding and at times low-level surroundings that is a tribute to both the British and their Argentine opponents.

This is one of the best books in this series and one that holds true to the original concept of discussing opposing aircraft and their crews.