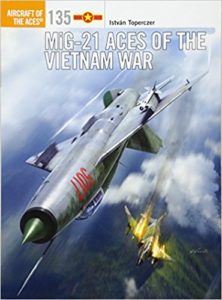 When the Soviet Union’s MiG-21 appeared in the early 1960s, very little was known about it, which was typical of most new designs from the USSR. Grainy, out-of-focus photos taken at parades and aerial displays did little to add to the knowledge of the unique delta-winged fighter. (I never heard the nickname of “balalaika” applied to this MiG, but looking at a planform view of the fighter does reveal the resemblance to the iconic Russian string instrument. That nickname is what the author notes in his opening paragraphs when referring to the MiG-21.)

Dr. Toperczer has made a name for himself in recent years writing about North Vietnamese aviation in the war that took so much of U.S. resources and so many American lives. A serving flight surgeon in the Hungarian Air Force, Toperczer received unique access to Vietnamese archives and veteran MiG pilots and aces. This new book is new; not a rehash of earlier works published by Osprey. And the astute reader will notice that the page count has increased by a signature of 16 pages that offer more photos of the MiG-21 during the war. I also have to mention artist Gareth Hector’s exciting front cover composition and regular Osprey artist Jim Laurier’s folio of profiles that make these books what they are at a very nominal price.

The text includes new and interesting information on how the MiG-21 came to North Vietnam and its use and development in tactics. At first, pilots were told not to engage American F-8s and F-4s. Losing even one of the precious new fighters was to be avoided. However, when pilots were given more leeway, or simply forced to fight these two redoubtable U.S. fighters, these preliminary tactics were quickly shown to be quite untenable, and their pilots had to confront their enemy as best they could. It’s amazing how many of these top pilots made multiple ejections and yet returned to the cockpits to score enough kills to become aces.

A number of the kills that went toward their totals were, in all honesty, Firebee drones, obviously unmanned and unarmed predecessors of today’s UAVs. Given the fact it isn’t easy to shoot at a moving target and destroy it, especially at high speed, these claims must be given their due. Consider the Allied pilots who confronted the V-1 so-called Buzz Bombs that posed such a threat during the last months of WWII. British, Allied and American pilots shot down more than a few of these dangerous weapons, often coming very close to their quarry. Several even developed the tactic of flying right up to the bomb’s wings so it could be tipped over, upsetting its gyroscopic guidance making it fall short of its ground target. The danger was genuine of having the bomb explode.

Another interesting fact about the claims by the North Vietnamese is that many of those kills were not corroborated by American records. Either the date and MiG never happened—as far as the U.S. is concerned—or the American aircraft was downed by a SAM or flak, not a MiG. A large number of the claims by MiG-21 pilots were U.S. Air Force F-4s and F-105s, although more than a few U.S. Navy aircraft were certainly downed by the MiG. (One Marine F-4J was destroyed by a MiG-21 in 1972.)

This new title might very well be the best of the books written by Dr. Toperczer about North Vietnamese MiGs and their pilots. I highly recommend it.