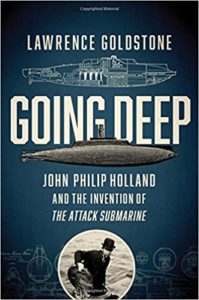 Lawrence Goldstone’s Going Deep is a complex tale of competitive inventiveness, ruthless commercial subterfuge, naval dithering, governmental corruption, foreign intrigue and occasional shenanigans. The author opens the book with the stunning wartime success of the German U-9 (Unterseeboot 9), an event where a relatively inexpensive submarine sank three large cruisers in one battle; a weapon and weapon system that would hugely impact naval warfare. The next sections commence with the development of the submarine from its earliest quite primitive beginnings through Robert Fulton’s Nautilus, David Bushnell’s Revolutionary War’s barrel-like ineffectual Turtle through the Confederate navy’s ill-fated Hunley. Finally, Goldstone introduces the key players in this complex drama: an Irish immigrant John Philip Holland, a former schoolteacher, church choirmaster and talented tinkerer; then his adversary, Simon Lake, a quarter century Holland’s junior, a descendant of old-line American stock and a fierce, imaginative competitor. Locked in intellectual combat for many years, both men end up as tragic figures that made highly significant contributions to underwater science, naval architecture and maritime warfare.

Designing a vessel that could operate underwater presented many complex problems. Until the end of the 18th century, propulsion on water was by way of sail or oar. At the beginning of the 19th century, steam engines brought paddle wheels and propellers. The submarine needed a novel driving force mechanism and its fuel supply, and dependable engines that could operate underwater without expending toxic fumes into the closed vessel. The craft had to be watertight at various depths, be swift and maneuverable, and provide sufficient oxygen for a crew’s survival. It had to dive and surface somewhat rapidly, maintain a course underwater without taking surface bearings and surreptitiously acquire targets. The boat had to have positive buoyancy while operating submerged and maintain a fixed center of gravity. It also had to serve as a platform for a variety of ship-destroying weapons. The evolution of how invention and innovation solve these and other problems is the thread that runs through this fascinating, multidimensional book.

Goldstone introduces John Holland via his Irish roots and the British and Irish political conflict in the United States. This conflict led to his first submarine, the Fenian Ram, a thirty-one-foot long and six-feet in diameter vessel fitted with a shallow conning tower and partly subsidized by the Irish Fenian rebels for use against the British. Holland followed with many clever advances over this relatively crude beginning. He envisioned the submarine as a naval weapon, a vessel that could dive like a porpoise and surface while engaging an enemy from the ocean’s depths. Holland had many early rivals, including George Baker and Thorsten Nordenfelt but his chief competitor was Simon Lake. Lake visualized a submarine that incorporated most of the requirements listed above, but that also dove and surfaced without pitching and largely dwelled or hovered on the seabed moving about on under-sea wheels. Lake’s vessel had a dual purpose, first as a marine salvage apparatus and eventually as a weapon.

The two men competed for private finance, acceptance of their inventions by the United States Navy and later the navies of many foreign governments. They formed separate corporations, Holland’s Electric Boat Company and the Holland Submarine Boat Company, and the Lake Company. Who had designed the best boat that met the navy’s specifications was an ongoing contest. Holland was the clear winner in most meetings, but Lake persistently came up with excuses for not meeting the deadline for the head-to-head competitions. The story is an epic nasty struggle to win congressional support and Navy Department authorizations for an imaginative but disruptive new technology. The reward, however, was the possibility of immense profits.

The author covers the corporate financial scandals, cases of government bribery and tolls taken on the health of both Holland and Lake. There are many side stories about their co-workers, investors and even President Theodore Roosevelt’s quasi-stolen ride on a submarine during a sea-trial. Holland was eventually shunted aside by his entrepreneurial business partners who were sometimes ruthless. He died on August 12, 1914, on the eve of World War I.

Lake, his mind always creative, changed to designing and building prefabricated housing and concrete pipes, but his non-marine ideas failed. In 1931 however, he refurbished a submarine that became the first to sail under Arctic ice. In time Lake’s resources dwindled and was forced to auction off personal possessions for money to live on. Simon Lake lived unassumingly for another decade and died of a heart attack on June 23, 1945, shortly after World War II had ended in Europe. Holland and Lake indeed changed the nature of maritime warfare with their ingenious weapon and weapon system.

This fascinating book immerses the reader into disparate areas: human character flaws, basic physics, marine architectural challenges, esoteric financial dealings and bureaucratic stonewalling. Going Deep is a well-written informative history of the submarine from the crude attempts at building underwater crafts, through numerous trials and ultimately to World War I successes. Goldstone presents the accomplishments of the many inventors, especially John Holland and Simon Lake, in a skillful fast-streaming narrative.

Norton is a maritime scholar residing in West Simsbury, CT.