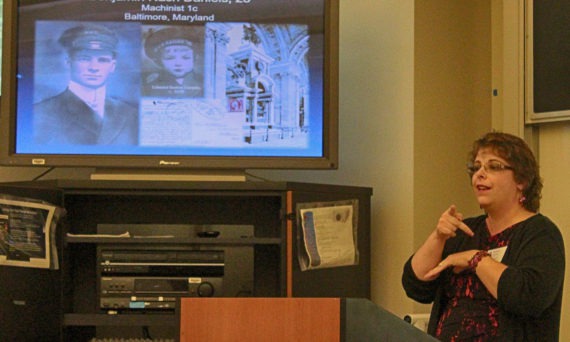 Why do you study naval history?

If you are reading this, I can only assume you have at least a passing interest in the field. Perhaps you are a budding historian in undergraduate or graduate school or an enthusiastic veteran. Simply put, you might just like naval history. Let’s just assume it is at least one of these things because I have a secret to tell you – I wasn’t sure if I could answer that question a week ago.

That’s correct. Almost four years into the job, I had trouble figuring out where I stood on a simple question: why do I do it?

We are allowed these types of existential crises throughout our careers. It happens. Mine occurred about a month ago when I woke up to find the Naval Historical Foundation website DOA. Amidst several significant scheduled events, I did the double duty as the NHF digital content developer AND website developer, building the entire site back up from scratch. The good news is, after many sleepless nights on the phone with support centers and my nose deep in how-to guides and message board FAQs, the site is once again functioning. Tiny victories.

Unfortunately, I never had time to recover and get myself back on an even keel. Once the website was complete, our small staff had to execute several high-profile events, namely the CIA-NHF Soviet Navy Seminar (6 September) and SECNAV Welcome Aboard Reception (13 September). I took time away from historical work to help the team with the details of event planning and setup. I spent most of my time behind a camera, not a computer screen. My thoughts drifted so far away from DOING the work of naval history and bringing it to the public that I wasn’t sure if I even wanted to attend the sessions. My mental capacity for naval history felt a bit “out of shape.” Truthfully, catching up on emails off my feet sounded like a nice reprieve for spending hours in front of a camera. By the end of the SECNAV reception last Wednesday, I had very little left in me. Even the recent discovery of USS Indianapolis did little to stir my tanks. I needed something more, so I ultimately decided to go to Annapolis and attend the conference. Despite my weary eyes, it was the smartest decision I’ve made in a while.

Naval Academy professor Commander BJ Armstrong put forth the best McMullen Naval History Symposium to date, no doubt a reflection of the high caliber of papers selected to present. As tired as I was, the conference was exactly what I needed. Amongst friends and colleagues old and new, there is no better place to learn and grow as a naval historian.

The Human Element of Naval Warfare

So, what did I see? A lot. But not enough. Let me phrase it better – What do you want to know?

By the end of the conference, my conference booklet was a patchwork web of highlights and question marks, as I could not see it all. Hermione Granger’s “time turner” from the Harry Potter book series does not exist in real life, so attendees could not see multiple sessions at once. Instead, colleagues divided and conquered like an invading army and reported back the salient points over a pint at the hotel. 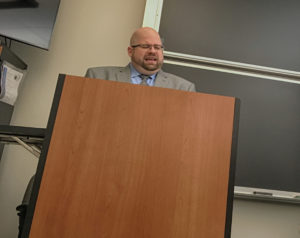 Here’s a brief rundown of what I learned at McMullen 2017:

And then there were the themes from this conference. Certainly, commemorations played a big part. With so many milestones currently ongoing in 2017 (WWI, WWII, Vietnam War), many sessions reflected these events. Many attendees were also abuzz with the presentations by the Chief of Naval Operations Essay Contest, sponsored by the U.S. Naval Institute.

Unlike the previous conference, I noticed a theme during MacArthur Memorial Director Chris Kolakowski presentation at the second session. “It’s amazing how often we talk about people,” Kolakowski said during his talk on leadership at the Battle of Mobile Bay. Using the personal examples of the dueling Admirals that day, David G. Farragut and Franklin Buchanan, he suggested that their actions in the face of adversity proved the ultimate factor that secured Union victory, and in turn closed the Mississippi River to the Confederacy. “In the end,” he said, “it is the human factor that is decisive.” Ships continue to be vessels, both in a literal and figurative sense. The men and women who bring them to life are what make naval history so unique, inspiring, and challenging. The panel hosted by the Naval History and Heritage Command’s efforts to find USS Indianapolis is another shining example of the human element involved in making naval history come alive. My tanks were officially stirred.

A Story of Loss Beyond Numbers

Coming into the conference, I had a basic grasp on the story of the tragic loss of USCGC Tampa (1912) during the First World War. Although many in the field know that Tampa’s destruction represented the largest loss of life in naval combat during the war, the men attached to her are not as well known. Arlyn Danielson and Nora Chidlow of the U.S. Coast Guard’s Historian’s Office provided session attendees an emotional look at the human element of the disaster, highlighting several stories of the men who went down with the ship. Most telling were the stories of the teenagers lost with Tampa, including sixteen-year-old Vincenzo Guerriero, an immigrant from Italy who “dreamed of adventures on the sea.” The First Class Boy enlisted as “Jimmie Ross,” another reminder of the parallel between early twentieth-century politics and the present day and his need to conceal his identity or ethnicity.

As a new father myself, I grew overly emotional by the end of the presentation. Good history will do that to you. I reminded myself that naval history is often cruel, unfair, and emotionally draining. People across the spectrum of naval history – in locations near and far away on land and at sea – died for us to study them, learn from their actions, and improve our understanding for a better future.

Indeed, naval history can inspire, anger, enlighten and break your heart. I ran the gamut of these emotions throughout my two days in Annapolis. Like a lost love’s lament, this conference was a gentle reminder of the power of the historical discipline. 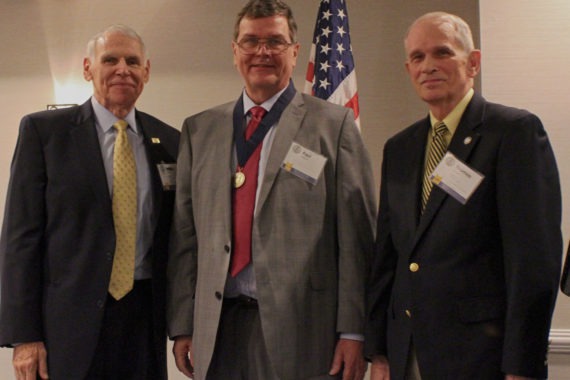 The conference ended Friday night with the Naval Historical Foundation Commodore Dudley W. Knox Lifetime Awards dinner. The Knox Award is given to deserving historians whose lifetime body of work embraces scholarship, leadership, and mentoring in the field of naval history. Over 100 attendees gathered to honor the work of Dr. Edward J. Marolda, CDR Paul Stillwell, and Dr. Jon Tetsuro Sumida, three men so deserving of an award.

If you are an avid student of naval history, you likely know about Dr. Marolda’s groundbreaking work on the U.S. Navy in the Vietnam War, Paul Stillwell’s seminal The Golden Thirteen, or Dr. Sumida’s In Defence of Naval Supremacy, a bulwark of scholarship that still resonates today. Indeed, their body of work is both impressive and cherished by the historical community. The forum and setting of the dinner allowed attendees, many of whom relaxed and dined with colleagues devoid of the stress of conducting presentations, a chance to see more about the men behind their collective tomes of knowledge.

A few highlights from the dinner will undoubtedly help you in your next cocktail hour conversation:

At the end of the night, the three honorees gathered with former Knox Awardees we have honored since its inception in 2013. The image is a perfect way to encapsulate the evening – a fitting tribute to the country’s finest naval historians. 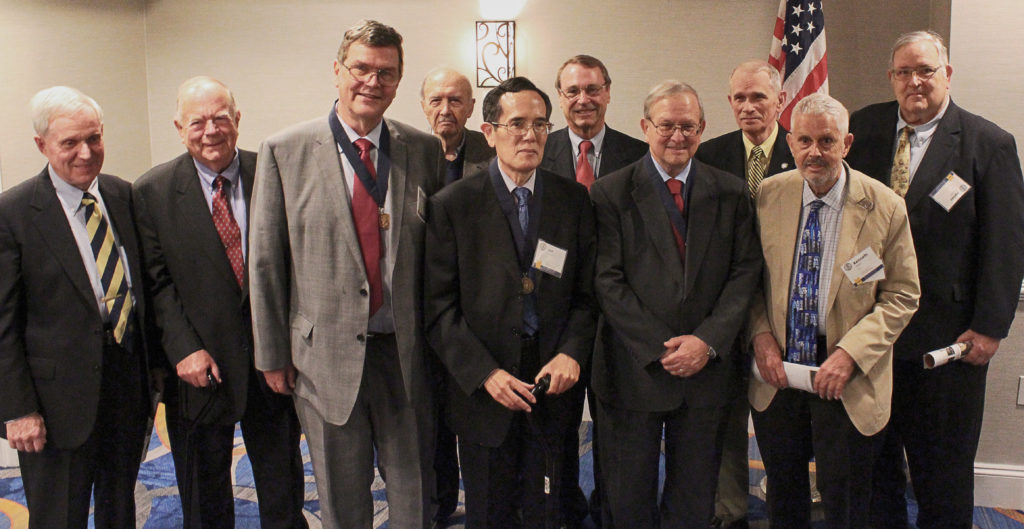 An Apple a Day

If you are a young naval historian thinking about getting into the field, I implore you to look into McMullen in 2019.

You attend conferences to mingle, learn, and gain experience in the field. Thanks to the Naval Academy for the perfect setting to grow professionally amongst the best and brightest minds in the field. NHF Member and current Auburn University Heather M. Haley gave some critical feedback about her first experience at the symposium:

“As a burgeoning naval historian focusing on the institution’s reactions to national social changes about race, gender, and sexuality in the 20th century, I was overwhelmed by the encouragement I received from attendees. I was also pleased—and relieved—with the positivity and receptiveness of my proposed dissertation research. Imposter syndrome plagued my conscious over the course of the first day, but by the end of the symposium, presenters encouraged me to present with them in the future years. The panels themselves were diverse in topic and theme—often requiring me to make tough attendance decisions, which is always a good problem to have. This was my first McMullen, but certainly not my last.”

And myself? I feel inspired. I want to go home and read all of my Navy books again and put down the Harry Potter one I’ve reread twenty ties. This is why you do this. It is why you endure the long panels in cramped rooms in the underbelly of Mahan Hall. There is plenty of conversation and the feeling of being at a special place in a particular time.

In the end, I must go back to this year’s unofficial theme. It is truly about the people, not the machines. It is people talking about people, learning from history. Those who attended the 2017 McMullen Naval History Symposium are the people to watch.

Acclaimed maritime historian Anna Holloway had this to say about the conference as it wrapped up on social media:

“#McMullen17 is that shot in the arm that reminds you why you do what you do. Why you are who you are. And why maritime history and heritage is so important.”

So, I implore you, put down the Harry Potter and pick up a naval history book. Perhaps one of the many written by our Knox Recipients this year. NHF has plenty of recommendations to get you started. Do so and get inspired to conduct research, write, and present on your topic at the McMullen Symposium. I was feeling weak, and the conference was the perfect shot of “historical penicillin” that I needed to get me back to health.

Take the shot and get writing. I’ll see you at your next doctor’s visit in two years.

(Note: The description above represents the thoughts and interpretation of the author, and do not necessarily reflect that of the Naval Historical Foundation)