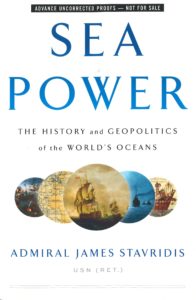 Sea Power: The History and Geopolitics of the World’s Oceans is a companion to The Accidental Admiral, Admiral Stavridis’ earlier best seller that provided many Americans with a basic education in national and global security. Stavridis, the first and only admiral to serve as NATO Supreme Allied commander, shifts his focus from continental concerns and prescriptions in the earlier book to the oceans surrounding the continents. Stavridis’ dual naval and scholarly career makes the author uniquely qualified to take on these topics. There seem to be few places he has not sailed in 37-years in uniform that included more than a decade afloat. His current role as dean of Tufts University’s Fletcher School of Law and Diplomacy, where he earned a Ph.D. in 1984, adds to his authority.

In seven chapters covering maritime regions with currently strategic significance, Stavridis addresses today’s policy issues from the broad context of maritime history, and by weaving his personal story throughout, his narrative is informal and conversational. His stylistic approach makes sense for readers with little or no background in naval and national security affairs, but there is nothing shallow or dull about the messages he imparts.

Stavridis has long been an advocate of “smart power,” a combination of hard and soft power applications to achieve national goals. Based on his experience in combined commands, Stavridis is a stellar proponent of complementary military and diplomatic means to security and peace, and few can claim clearer practical experience with global alliances to facilitate these methods.

The Atlantic and Pacific Oceans surround the U.S., but they are both relatively stable today. Stavridis argues that the situations in more distant seas and the littorals that frame them raise greater concerns for our nation and democracy. The U.S. Navy and its seagoing allies are crucial elements in the use of the smart power continuum to support not only American interests but also global progress. These five strategic areas include the Indian Ocean and the Arabian Gulf, the Mediterranean, the South China Sea, the Caribbean, and the Arctic Ocean.

Stavridis considers the Indian Ocean, along with the Red Sea and Arabian Gulf, as centrally vital 21st century maritime and diplomatic spheres. With half of the world’s shipping, 70 percent of oil supplies on its sea lanes and 90 percent of the Islamic world living around it, the Indian Ocean’s importance should be obvious. To promote peace, Stavridis calls for greater involvement with India, with emphasis on resolution of the Indian-Pakistani conflict; more U.S. Navy deployments and combined exercises in the region; and more energetic efforts to stabilize the Arab states through pragmatic alliances.

In the Mediterranean, the home of Western civilization, Stavridis recommends more NATO maritime involvement, better intelligence collection efforts, and a long-term solution to the current, dangerous instability in Libya.

The South China Sea is the locus of an accelerating arms race, and the Peoples Republic of China has staked claims in the area to contain offshore threats. Stavridis suggests continued U.S. contact and collaboration among the region’s military and naval forces and more extensive use of organizations such as the International Court of Justice in The Hague to resolve disputes.  He also supports the now beleaguered Trans-Pacific Partnership as a strategic as well as a commercial tool.

The Caribbean also needs attention. Stavridis calls for an evolution of policy beyond the paternalistic Monroe Doctrine, a coherent regional strategy, and allocation of economic and other resources to advance laggard economies.

Finally, the Arctic Ocean cannot be ignored. First, the environmental threat to the region is virtually incalculable and must be addressed. Global warming is destroying the polar ice cap and dangerously raising the sea level. Without decisive action, many of today’s continental coastlines will vanish under water by the next century. Stavridis also believes the nation must increase its limited presence in the region to face down Russian territorial aspirations.

The book closes with a chapter on recent antipiracy activities, a paradigm for international maritime cooperation that has been successful, and a plan for the U.S. Navy’s critical role in future global affairs. Given the current political and economic climate, it’s doubtful that Stavridis’ vision, even a far more modest version, will be implemented.

Nevertheless, the accidental admiral’s ideas, clear-headed and based on vast experience, would likely benefit the nation and the world and deserve serious attention.