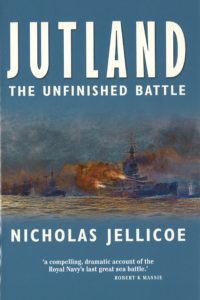 In the second decade of this century, many in the United States commemorated the War of 1812. Similarly, many in the United Kingdom are seeking to understand the First World War. Author Nicholas Jellicoe, the grandson of the First Lord of the Admiralty John Rushworth Jellicoe, became interested in the Battle of Jutland, the action between the Grand Fleet with the Battle Cruiser Fleet and the German High Seas Fleet May 31- June 1, 1916. During that engagement, 250 ships met at sea and engaged in the largest surface battle in naval history. The Royal Navy suffered a disproportionate number of losses at Jutland but enjoyed a strategic victory.

Through this work, Jellicoe describes the events as the strategic, operational, and tactical levels of warfare, but also on the personal level as relayed by some who had a limited view but colorful perspective of the battle. Naturally, as an imperative to any non-fiction war study, Jellicoe analyzes leadership decisions during the conflict.

Following this theme, one recognizes that describing the kinetic action at sea using diagrams depicting each combatants’ maneuvers is an important feature of any book. Jellicoe does this but also built a companion website (www.jutland1916.com) with supporting graphics and a narrative in his voice. This idea may become a new standard for naval historians and others who write about warfare at sea and is sure to draw in serious scholars and may turn casual readers into enthusiasts. Jellicoe also provides commentary within the volume in sections highlighted in gray boxes that provide valuable, amplifying information on topics such as signaling and British gunnery performance.

Jellicoe opens Jutland by describing how the British and German navies reformed before World War I. First Sea Lord John Arbuthnot “Jackie” Fisher recognized the German threat and re-organized the Royal Navy to emphasize operations in the North Sea and the English Channel. Secretary of State of the Grand Imperial Naval Office Alfred von Tirpitz lobbied for a blue water Navy that would ensure that Germany’s access to global trade could not be bottled up by other European powers. Fisher and Tirpitz’ influence upon each of the respective fleets set the stage for Jutland.

The most tragic and seminal event for the Royal Navy came during initial engagement between Battle Cruisers. To improve gunnery, British sailors violated safety protocols that led to magazine explosions on board Indefatigable and Queen Mary. The impact of these losses significantly influenced both sides’ evaluation of the battle. The causality described in the book is thorough but is also stated succinctly on the companion website in Jellicoe’s voice. “The gunners wanted the cordite and shell as fast as possible so they could shoot more quickly. Consequently, cordite bags were dangerously stockpiled around the inside of turrets and passages. And this made the flash tight doors designed to stop the flames traveling between the turret and the magazines irrelevant.”

Jellicoe fully unpacks the battle relaying action at the fleet level. Equally interesting is the aftermath, of Jellicoe the grandfather serving as First Lord of the Admiralty, enduring political barbs from above, as he and Lloyd George did not get on, and from Beatty and other critics that suggested the result was unsatisfactory. Many in the United Kingdom hoped for a modern-day Trafalgar, a decisive defeat marked by disproportionate losses. The author correctly points out, his grandfather’s approach was based in part on limited information, even a failure on Beatty’s part to signal important updates, and measured since his fleet had gained the tactical advantage. What to many appear conservative must also be recognized as strategically favorable. The German fleet never came out to fight again and had to resort to unrestricted submarine warfare.

This whole package, book and companion website, is a must for serious naval historians. But, Jellicoe’s writing is entertaining enough to engage anyone simply looking for a delightful read.

Commander Phillips served in the U.S. Navy as an Explosive Ordnance Disposal Technician and Diving Officer. He is the author of two works of naval fiction, Proximity and The Recipient’s Son. CDR Phillips is pursuing a Ph.D. in the Laughton Naval History Unit in the Department of War Studies at King’s College London.