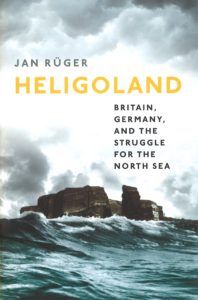 Heligoland rises abruptly and unexpectedly in the southeastern corner of the North Sea.  Featuring dramatic cliffs rising more than 160 feet, it is a small, triangular island less than four-tenths of a square mile in area. Along with the nearby and even smaller Düne Island, Heligoland today is a holiday resort destination, known for its tax-exempt status within the European Union.  Strategically located less than thirty miles off the coast of Germany and less than forty-five miles from the mouth of the River Elbe and the port of Cuxhaven, the Heligoland archipelago is the only island possession of Germany not near the mainland. For centuries, Denmark and its rulers possessed the island. During the Napoleonic Wars, Great Britain occupied Heligoland.

It is at this point in Heligoland’s history that Jan Rüger, Professor of History at Birkbeck, University of London, begins his analysis in Heligoland:  Britain, Germany and the Struggle for the North Sea. Heligoland’s strategic location in the North Sea near the German coast and only 300 miles from England made the tiny island the focal point of Anglo-German interaction for over two centuries. For most of that period, Great Britain and Germany – both before and after the latter’s creation in 1871 – were hardly antagonists and certainly not naval rivals. Rüger uses Heligoland as the lens through which to view and interpret the relationship between Britain and Germany since the early nineteenth century. His monograph is a micro-history of the island that provides a much-needed longer-term perspective on the Anglo-German relationship.

Analysis of that relationship traditionally has been focused on the naval rivalry between the two nations in the period just before the First World War, which culminated in that conflict and re-emerged in the Second World War. However, as Rüger summarizes:

[F]or most of the nineteenth century Britain and Germany were neither joined in comprehensive alliance, nor locked in conflict. This was a decidedly ambivalent relationship long before Bismarck founded Imperial Germany and Wilhelm II decided to build a battle fleet against Britain. What took place in the decades before the First World War was not an inevitable shift towards enmity, but an increase in both cooperation and conflict. Under radically altered circumstances, this state of interdependence re-emerged after the Second World War. In order to appreciate this, the traumatic periods of violent conflict need to be inserted into the longer history of Anglo-German coexistence – in this book from the Napoleonic Wars to the Cold War (p. 3).

Heligoland begins with Britain’s occupation of the island due to its strategic position and Denmark’s refusal to enter a strategic alliance with England during the Napoleonic Wars and moves chronologically through the next 150 years. The Royal Navy captured the island in September 1807, and for the next seven years, Heligoland was a focal point for British espionage operations on the continent of Europe directed against France, smuggling of goods in circumvention of Napoleon’s “Continental System,” and recruitment for the King’s German Legion. With the downfall of Napoleon, England returned all occupied Danish territories to Denmark except Heligoland, which ceded the island to Great Britain in January 1814 to achieve peace. “London’s determination to keep the island expressed an underlying belief in the importance of Continental Europe for Britain’s geopolitical position” (p. 31). The fight against Napoleon had shown England that it could not just rely on its position as an island to ensure its safety. By securing Heligoland, Great Britain maintained an outpost that safeguarded its ability to prevent any future naval tests arising from the North Sea.

For the next seventy-six years, the island was Great Britain’s smallest colonial possession. It became a haven for German radicals during the 1830s and 1840s. Professor August Heinrich Hoffman wrote, “Das Lied der Deutschen” – the “Song of the Germans” – on Heligoland in 1841. Set to music, the poem later became Germany’s national anthem, originally entitled Deutschland über Alles. By the middle of the nineteenth century, the island began to attract the German aristocracy for summer visits. Unlike other British colonies (save Hong Kong), gambling was permitted, and Heligoland became a prominent holiday destination. While the island continued to be governed by an odd mixture of laws and regulations pre-dating its acquisition of the island, England tried to tie the island’s residents more closely to Great Britain, albeit without much success. For example, Germany’s weights and measures were introduced on Heligoland in the 1870s, public announcements were posted in English and German, and postage stamps were issued in British and German currencies and printed in Berlin.

Although Bismarck had long desired to incorporate Heligoland into the new German Empire, he adopted a patient diplomatic approach. “For Bismarck and most in his government the island’s value was defined by the projected Kiel Canal and its function for the Imperial Navy” (p. 77). At the same time, the island’s value for Great Britain was decreasing due to technological advances that reduced the need for an island outpost to support a naval blockade. Britain would have to incur substantial costs to fortify the island if retained. By the late 1880s, as Anglo-German relations continued smoothly and cooperatively, the time was ripe for Great Britain to trade the island to Imperial Germany in exchange for colonial possessions in German East Africa. The Royal Navy no longer needed it as a base for North Sea operations. On August 10, 1890, the Union Jack was lowered and, with Kaiser Wilhelm II in attendance, the Imperial German Eagle raised. Wilhelm announced, “‘the last piece of German soil’ that had remained outside the Reich was being added” (p. 89). Heligoland now was part of the Kaiserreich.

But Great Britain had not consulted the Heligolanders regarding whether they desired to leave the British Empire. Indeed, all reports indicated the residents did not wish to become part of Imperial Germany, even though for a new generation of Heligolanders, Germany was part of their daily lives. No plebiscite or vote was held, lest the result ruin the deal reached between the two governments. Just as Great Britain was unable to Anglicize Heligoland’s residents, Imperial Germany failed to Germanize its newest citizens. Imperial Germany imposed increasing restrictions and security on the islanders as they fortified the island as a naval base for the Kaiser’s fleet. “After the turn of the century, Berlin declared Heligoland a focal point for counter-espionage and expanded the police presence on the island” (p. 127).  When war came in early August 1914, the entire civilian population was removed from the island in one afternoon.

Expecting to be the locus for some great naval battle, in fact the island remained undefeated, isolated, and ultimately of no real significance during the Great War, other than as “an idée fixe not only amongst politicians and officers, but also for the wider public” in Great Britain (p. 143).

With the end of the war, Heligoland became an image of Germany’s utter defeat. The native Heligolanders returned, and the victorious Allies ultimately decided that Germany could keep the island but that it would be neutralized. Great Britain managed the destruction of all the Kaiser’s military fortifications. During the 1920s and 1930s, Heligoland again became a holiday destination, but its permanent residents still refused to become Germanic. Once more, they played their asserted affection for Great Britain against the government in Berlin. Special laws and exclusions often were required to ensure at least some vestige of loyalty. In both countries, “the island continued to function as a metaphor of Anglo-German difference, a rhetorical tool that was ideally suited to mobilize well-established stereotypes” (p. 167).

With the rise of Hitler – who visited Heligoland in 1928 with Goebbels and others and again in 1935 – the island was refortified and became a symbol of Germany’s rebirth and remilitarization. The Nazis imposed their usual harsh regulations on the island to make it a representation of a pure Aryan land. During the war, Heligoland again played no strategic role.  Its significance again was more psychological for both nations. “Heligoland posed a stark reminder of everything that had gone wrong between the two nations” (p. 197). The Royal Air Force bombed the island several times without much effect. Finally, on 18 April 1945, the RAF subjected the small atoll to a thousand-plane raid, literally destroying almost every building and home. The remaining islanders left for the mainland four days later. After the Nazi surrender in May, the island was unpopulated for the first time in centuries and was technically “occupied” by Britain.

Yet Heligoland remained an unresolved issue between Great Britain and Germany. On 18 April 1947, England set off the largest non-nuclear explosion in history on the island. The blast created a shockwave felt over forty miles away. Parts of the island were leveled; new areas created. As if to ensure sufficient punishment was imposed, the RAF used it as a bombing range.

But by October 1949, with the creation of West and East Germany, the island became a political focal point, this time regarding its future as part of West Germany or Great Britain. The new East Germany government used the island’s unresolved status to discredit the West.

Activists who wanted the island returned to West Germany occupied the desolate land. The post-war relationship between Britain and West Germany seemed stuck on the status of the island. Finally, after new islands nearer the German coast were identified that the RAF could use as a bombing range, on 1 March 1952 Britain returned Heligoland to West Germany. The native Heligolanders finally returned in 1954. However, the residents now finally viewed themselves as German. The multiple destructions by Great Britain finally caused the islanders to end their long tradition of playing off one nation against the other. No longer of any strategic or naval significance for either nation, Heligoland today has returned to a peaceful existence.

Rüger’s book moves seamlessly between the views and demands of the inhabitants of Heligoland (a population never more than a few thousand), and the considerations and policies impacting the island in the halls of government in Great Britain and Germany. Whether the residents of Heligoland viewed themselves as English or German – or some status in between – illustrates the uncertain nature of the relationship between England and Germany for much of the period under study. Only after two world wars, construction, destruction and rebuilding of military installations, and its utter desolation after World War II did Heligoland become finally Germanic. Well-researched from multiple archives, Heligoland aptly illustrates the naval history between Great Britain and Germany and shows that it was not always or necessarily one of conflict. The book also provides a useful and important reminder to historians of the need to consider a “long view” rather than to become fixated on a short timeframe. Often, the “long view” provides important insights for any limited age under study.