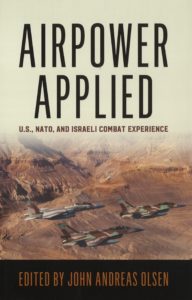 This proved to be one of the most difficult book I have reviewed over the years. It is not the usual historical survey of war, or of a nation’s air force in a war or period. No colorful descriptions of dogfights or other engagements or the accomplishments of heroic and talented aviators fighting for their country.

Although the book is a decent size, the only photograph was on the front of the book jacket, a well-known photo of three colorfully-camouflaged Israeli fighters over mountains near the Dead Sea. How could the editor and authors, as well as the publisher, omit photos to compliment this scholarly, albeit heavily-written treatise. My question was never answered. Ample photography is readily available these days from many sources official and unofficial for any subject detailed in the text. And I certainly exhort anyone associated with a reprint, or second edition, to strongly consider including anywhere from thirty to fifty good photos to illustrate what the authors have gone to such efforts to write.

That said, Airpower Applied is a well-researched book offering a different angle of reporting how three different groups—the U.S., NATO, and Israel—have conducted several significant aviation campaigns in the last 100 years. The individual chapter authors certainly have credentials, especially Dr. Richard P. Hallion, at one time the U.S. Air Force Historian. He has written several books and authoritative articles. The editor of the collection is a colonel in the Royal Norwegian Air Force. Although not a pilot or crewman with any aviation experience, he has several books to his credit.

Throughout the book, the editor’s favor lies with other air forces, and not with the various navies of the countries his authors occasionally include. As an example, he continues the old saw of crediting the USAF with the lion’s share of photo-reconnaissance missions during the 1962 Cuban Missile Crisis. The Air Force’s RF-101s were not ready to begin overflying Cuba, and that task rightly fell to the RF-8As of VFP-62 and the Marine Corps’ VMCJ-2, which sent aircraft, pilots and ground crews to their Navy compatriots.

The scope of this book is quite encompassing and takes considerable reader dedication to get through the book. I also believe that the editor and authors also assume a good deal of prior knowledge. The history portion or individual introductions are fairly extensive and probably should not be seen as a deterrent. The section on the 1991 Gulf War and its “prequel,” the buildup, called Desert Shield—the actual war called Desert Storm—receives considerable coverage. The role of the U.S. Navy and Marine Corps gets more coverage than other preceding discussion, but still, I feel the U.S. naval services are given short shrift, which is unfortunate. The U.S. Air Force and other coalition participants did not win the war against Saddam Hussein all by themselves.

Of course, the headline-grabbing accounts of F-15s knocking down many Iraq aircraft might have occasionally obscured the public’s perception as to just who was doing the fighting, especially when the Navy could count only three air-to-air kills—two MiGs by two Navy F/A-18s in January, and one helicopter by a Navy F-14 toward the end.

One section I do find especially interesting is the discussion of Odyssey Dawn that saw the demise of Colonel Ghaddafi in 2011. After all the time, this twisted terrorist was finally brought down by his people, with the help of Allied airpower, including Marine Corps Harriers. An important addendum concerns action against the American compound that ended with the death of the American ambassador and the rise of a terrible and as yet unfinished account of the role of the American Secretary of State Hillary Clinton, who by then began her unsuccessful run for the 2016 presidential election.

At one point (page 249) early in the section on the Israel Air Force (IAF)—note the correct spelling, not Israeli but Israel—that section’s author poses an interesting apples-and-oranges comparison that invites response: “Arguably the best combat aircraft of its era, the Phantom represented a quantum leap over the Mirage III in terms of performance, avionics, the variety and weight of ordnance it could employ, and its electronic warfare systems.”

I asked long-time friend, retired Brigadier General Iftach Spector if he agreed. Spector is one of the IAF’s ranking aces with a combined total of 12 kills in Mirages and Phantoms. During his long career, he fought in four Arab-Israeli Wars and commanded two of the IAF’s premier fighter squadrons. He is a successful author and has turned to painting, often using his own experiences in the cockpit as subjects.

The F-4 was, indeed, a quantum leap over the Mirage III in some dimensions, but in some, it was not. Both aircraft were purchased by the IAF, and used, as multi-role fighters. Their top speed and rate of climb for interception were equal. The F-4 carried much more weapons and electronics, and had longer operational range, making it preferable for air-to-ground attacks, but still, in the six-day war, our Mirages reached and destroyed enemy targets as far as our F-4s ever did.

The F-4 had large radar (with operator [sic] on board), and improved missiles, but still the Mirages, with their outdated radar and single pilot, proved equal in air-to-air (including shooting enemy aircraft by night), and even better in close maneuvering, which was the case in most battles of that time.

From my experience, every aircraft gives wonderful results if operated by skilled operators. The wider lesson is that air forces must put any weapon system to jobs that fit it. In this way, you get the maximum from your men and machines.

While my assessment of Airpower Applied is affected by its unfortunate lack of photographic support, it is still a good overall view of important portions of both the 20th century’s and the early 21st century’s records of aerial warfare.