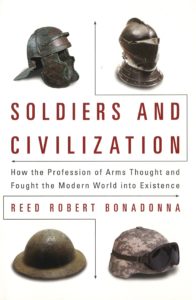 No one disputes that the growth and development of warfare have been functions of the advance of civilization, but the contributions of war to human progress may be less obvious.  Many argue that violent conflict reflects little more than relentless cruelty and ruthlessness, manifesting the worst aspects of human nature. The author, a recently retired director of ethics and character development at the U.S. Merchant Marine Academy and a retired Marine Reserve colonel, presents a scholarly but approachable and persuasive rejoinder that affirms warfare’s reciprocal positive contributions to progress.

Dr. Bonadonna’s theme is Clausewitzian, following the same empirical and realistic stance embodied in Vom Krieg and similar works. From the start, he acknowledges the same contradictory character of warfare and soldiering that Clausewitz recognized, writing, “The soldier is both the least civilized and the most civilized of persons.  Soldiers walk the weird wall at the edge of civilization, but they are prepared to serve their civilization and society without stint or limit…. soldiers are constantly in danger of forsaking that which they serve and of forgetting the nature of what they do.” Bonadonna, whose doctoral degree is in English literature, approaches the strange nature of war from a broad cultural and social perspective emphasizing the liberal arts, not merely history. War is paradoxical, ironic and ambiguous, all characteristics that defy traditional analysis. History has shown, however, that society and the military profession have been able to reconcile this tension within the context of cultural history and the liberal arts. Poetry can describe and evaluate war far better than science and objective metrics precisely because poetry and war both are stochastic and embrace contradiction.

The author’s eclectic method is revealing. Nearly everyone interested in civilization recognizes that poetry and literature, art, music, and rhetoric as well as the sciences have influenced society. What may not be so clear is that war has been a pervasive subject of the liberal arts, creating a wide avenue of influence that has propelled culture and enlightenment forward. Also, Bonadonna utilizes the same method to trace the growth of the military as a legitimate profession, once again derivative from previous work, most notably Huntington’s seminal The Soldier and the State, although he casts a far larger historical and cultural net for his analysis than his precursor.

Bonadonna focuses on Western civilization and Western military history, and this is something of a limitation, although his focus spans prehistory to the present day. He departs, however, from the track of classicist Victor Davis Hanson’s Carnage and Culture that suggests Western military development has been uniquely effective because it is purely a byproduct of Western, especially Athenian, culture in the 4th century BCE.  Like Hanson, his study centers on Greek and Roman military history with subsequent chapters on the 17th, 18th, 19th and 20th centuries.  He also provides more than a glance at the Byzantine and Holy Roman Empires and the Middle Ages, eras not usually considered hotbeds of innovation in military technology, tactics or strategy.  Bonadonna claims with some justification that these periods did advance military professionalism, despite societal limitations manifested in relatively sparse cultural achievements.

The meat of his argument, however, lies in the classical period and the centuries following the “Military Revolution” in early modern Europe after the 30 Years War, as postulated in Michael Roberts’ well-known essay in 1955.

The reciprocal links between war and civilization are direct in the classical age and overwhelmingly documented.  Greek city states and the Roman Republic depended on armed citizens to protect their interests. Soldiering was a civic responsibility, formalizing the relationship between the state and individuals.  It is hard to suggest that military activity did not help to shape Greek society.

The revolution in the latter 17th century was an outgrowth of the rise of the nation-state, the predominant form of governance ever since, and the creation of state-sponsored armed forces. Over time, nation-states have become far more complex, so it’s no surprise that military forces and professions have adopted comparable complexity. Bonadonna lays out a cultural and social framework for evaluating this evolution, touching on changes in technology and the political, social and economic environments shaping warfare.  He also addresses the conceptual issues underpinning military leadership over 500 years, arguing persuasively that military thinking had a major effect on the intellectual aspects of developing society.

Soldiers and Civilization is rich in content that summarizes military history from an interesting vantage point, not as a defense or rationalization for warfare, but instead by accepting conflict as integral to human nature and seeking greater understanding of what appears to be unavoidable behavior.  One minor drawback is that naval and aviation history receive cursory treatment since the author points out that naval warfare was ancillary to fighting on terrain until the age of sail, and military aircraft have barely a century of experience (although aerospace technology accelerated with breathtaking speed in its relatively short life). This deficiency should, however, provide impetus to expand this interesting study in those venues and incorporate military history more completely into social and cultural scholarship.