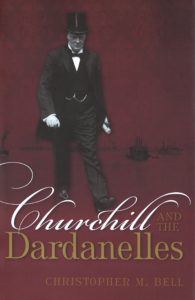 Winston Churchill was First Lord of the Admiralty in Herbert Asquith’s Liberal government from 1911 to 1915. Among the many initiatives he undertook as wartime First Lord was his advocacy for a naval assault on the Dardanelles, a narrow strategic strait in northwestern Turkey that led at its far end past the Turkish capital, then at Constantinople, to the Black Sea. Churchill believed that an assault at that point would help open a supply route to Russia, eliminate a weak German ally from the war, and rally other Balkan nations to the Allied cause.

Churchill also wanted to deal with the naval threat presented by SMS Goeben and SMS Breslau, two German warships that had evaded the British Royal Navy in the war’s opening days. These ships subsequently had been transferred to the Ottoman navy by Germany, though both retained their German crews. All in all, given the continuing stalemate on the Western Front, the First Lord believed a victory in the eastern Mediterranean would advance the Allied war effort and boost morale.

Churchill was convinced that the Dardanelles could be forced by the sudden thrust of a powerful naval squadron. He thought that this was the perfect project for several available old battleships that no longer had the speed and power necessary to accompany Britain’s main fighting force, the Grand Fleet in the North Sea, crucial to the defense of the United Kingdom. Loss of even a large number of the old ships would have been a reasonable price to pay, he felt, if the mission’s goal could be achieved.

The attack, which began on March 18, 1915, was a disaster. The naval bombardment that was meant to silence the guns in the Turkish forts failed to do so, and three allied warships involved in the effort, British battleships Irresistible and Ocean and French battleship Bouvet, struck mines and sank. HMS Inflexible was also damaged in the attack, as were the French battleships Gaulois and Suffren.

Despite the failure of the naval attack, Churchill remained convinced that the project could succeed and called for further exertions, however, the naval commanders on the scene declined to undertake another solely naval attempt. Rather than abandon the effort, this led the government to launch the next phase of the campaign, landing troops on the Gallipoli peninsula in April. Allies gained and held only a small foothold on the beaches in exchange for substantial losses due to the weeks-long delay following the suspension of naval actions and the improved Turkish defenses that stymied aggression action by soldiers once they landed.

The resulting stalemate, particularly after First Sea Lord Admiral ‘Jacky’ Fisher’s objections became known and he resigned, contributed to a political crisis in Britain. Combined with recent offensive failures on the Western Front, this precipitated the fall of Asquith’s Liberal government and its replacement with a coalition government. As a condition of joining the coalition, the Conservative opposition demanded and received Churchill’s removal from the Admiralty. Asquith kept him in the minor post of Chancellor of the Duchy of Lancaster, but eventually excluded from the war councils, Churchill resigned on November 11, 1915. Allied forces soon withdrew from the Dardanelles and for years afterward the failure of the campaign, for which a hostile press loudly blamed him, made Churchill’s name nearly synonymous with the Dardanelles’ disaster.

Christopher M. Bell, a professor of history at Dalhousie University in Halifax, Nova Scotia, examines the events surrounding the Dardanelles campaign in great detail in Churchill and the Dardanelles. He concludes that Churchill’s responsibility for the failed operation was exaggerated by hostile newspapers and by political enemies, especially members of the Conservative Party who in 1915 still resented Churchill’s shift of political allegiance in 1904 to the Liberal bench. Churchill accepted the responsibility appropriate to someone acting in his official capacity, but as Bell shows, there was plenty of blame available to apportion to others in the government and on the ships in the Aegean.

Churchill’s detractors long characterized him as a Svengali-like mastermind running amok and enforcing his will on the rest of the government. He was charged with intimidating his presumably courageous high-ranking naval subordinates, including Admiral Fisher, and refusing to follow their sage advice. Bell offers a more balanced interpretation of the events. Fisher is portrayed less as a navy officer frustrated in his advisory capacity and more as a political competitor who wanted Churchill’s job. In Churchill and the Dardanelles, he appears conniving, furtive, and dissembling and hardly a purveyor of carefully considered professional advice. In fact, the record shows that Fisher went to great lengths to avoid openly stating any position on the campaign, one of the key factors that later caused confusion.

The argument that Churchill dominated decision-making regarding the expanded campaign also falls apart in Bell’s account. Though Churchill abandoned his push for a navy-only charge through the strait in response to the objections of others, the insertion of the army onto the Gallipoli peninsula simply could not have occurred without the approval of Lord Kitchener. The notion that Churchill had the ability to overrule the Secretary of State for War was (and remains) preposterous.

Further, the employment of the army came with the concurrence of the Royal Navy on-scene commander, who though pressed by Churchill declined to renew the advance on Constantinople with his ships alone. The cabinet might have played a more productive role in sorting out a proper strategy, but as Bell makes clear, well-defined lines of control and decision making in that body did not exist. The ultimate failure of those ground forces did not follow any particular interference by Churchill in the planning. It followed from a month’s delay that gave Turkish troops time to improve their defenses, from poorly planned attacks, and mediocre leaders who executed badly.

It is interesting to note that many other British operations did not achieve the goals intended. How often did commanders fail—repeatedly and at great human cost—during the war? And yet Gen. Douglas Haig and others maintained their place as respected defenders of the nation during and long after the war. In that context, it is hard to see how the Dardanelles-Gallipoli campaign was particularly unique and why Churchill’s role was singularly infamous. Bell’s account of Churchill’s role in the Dardanelles campaign is thorough and convincing. It is well worth a careful reading for anyone interested in the high-level genesis, troubled execution, and ultimate failure of the attempt to open the strait.