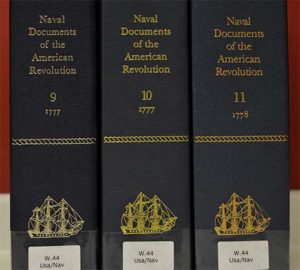 On 7 July, the Naval Historical Foundation received news that it will receive a $49,700 matching National Maritime Heritage Grant to digitize the current 12-volume Naval Documents of the American Revolution (NDAR) series in a web-searchable format and lay the groundwork for the online publication of additional volumes. As President John F. Kennedy wrote in the foreword of the first volume: “These volumes make amply clear the critical role played by sea power in the achievement of American independence.” The current set captures hundreds of documents found in repositories in the United States and overseas covering the period of 1774 through May 1778.

About the NDAR series

Dudley W. Knox, who was in charge of the Navy’s Historical Section and subsequently the Office of Naval History and Records from 1921 to 1946, attributed the scarcity of works on the history of the United States Navy to the “inaccessibility of authentic sources.” His remedy was three-fold. First, he transformed the Office of Naval Records and History into a modern archival repository where records were systematically collected and professionally processed. Second, he undertook to collect, edit, and publish selected naval records. Last, he wrote a notable article in the January 1926 Naval Institute Proceedings calling for the collection of historically significant documents and called for the creation of the Naval Historical Foundation.

At the suggestion of President Franklin D. Roosevelt, the Navy published Naval Documents Related to the Quasi-War between the United States and France in seven volumes between 1935 and 1938 under Knox’s direction. They also published Naval Documents Related to the United States Wars with the Barbary Powers in seven volumes between 1939 and 1945. These series printed only American documents, a reflection on the practices of the time.

The publication of the first volume of the Papers of Thomas Jefferson in 1950 inaugurated the modern era of editing America’s historical documents. The Jefferson Papers project and other projects that followed its model included the texts of both outgoing and incoming correspondence, drawn from all collections in all repositories holding such materials. The editors provided additional context through extensive notes.

The distinguished scholars who constituted the Secretary of the Navy’s Advisory Committee on Naval History, aware of the proliferation of the new documentary histories of figures from early American history modeled on the Jefferson volumes, judged that the time was right for the publication of a Navy series on the American Revolution. Rear Adm. Ernest M. Eller, when he assumed the position of Director of Naval History in 1956, took up the challenge. The series sought to conform to modern scholarly documentary editing practice and include context and coverage for both sides of the conflict, including materials from British, French, Spanish, and other European archives. The search for an editor began.

Admiral Eller engaged William Bell Clark for the position and to select and edit the documents to be included in the series. Clark, an insurance company executive and former newspaperman, was the preeminent authority on the American navies of the War of Independence. He had published biographies of three captains of the Continental Navy, as well as books on George Washington’s fleet of armed schooners that cruised to intercept British transports in Massachusetts Bay, on the privateers Benjamin Franklin commissioned to operate in British waters, and on the Continental Navy sloop-of-war Saratoga.

Clark accepted a contract to edit the new series. His collection formed the basis for the project, but he along with other staff gathered copies of manuscripts and documents across America and abroad. Eventually, they collected on microfilm more than 500,000 documents. Clark completed his first volume, covering the period from December 1774 to September 1775, in 1964. When Clark died in 1968, volume 4 was in page proof, taking the story up to the eve of the Declaration of Independence.

William James Morgan, who, as head of the Historical Research Branch of the Naval History Division, had assisted Clark from the start of the project, took over the editorship on Clark’s death. Morgan, a Navy veteran, had a doctoral degree from the University of Southern California and had published his dissertation on the New England captains in the Continental Navy as a book entitled Captains to the Northward. Morgan presided over the series until his retirement in 1981. Dr. William S. Dudley took over from Dr. Morgan, and Dr. Michael J. Crawford succeeded to the post when Dr. Dudley became the Naval Historical Center’s senior historian in 1990.

The U.S. Navy’s Naval Documents of the American Revolution series makes possible the comprehensive study of the naval aspects of the War of Independence. The twelve volumes in print contain the texts of the contemporary records necessary for the documentation of the war at sea during the period from December 1774 through May 1778. The volumes have won a number of awards from organizations such as the Society for Military History, the North American Society for Oceanic History, and the Society for History in the Federal Government.

Your Help is Needed to Complete the Project!

Because the Department of Interior-managed program requires that grants matched dollar for dollar, the Naval Historical Foundation will be looking for contributors (who will be recognized in the online volumes) to match the $49,700 National Maritime Heritage Grant to fund this important digitization effort. The NHF has already received a pledge of $5,000 from a generous member. Interested potential major donors should contact Dr. Dave Winkler at dwinkler@navyhistory.org. However, contributions need not be in five or four figure amounts. Every dollar contributed receives a matching dollar through the grant. Everyone is welcome to contribute online through the Naval Historical Foundation’s donor portal and simply note “NDAR” in the comments section for your online contribution.