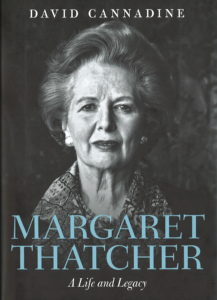 This to-the-point, short biography of Margaret Thatcher, the United Kingdom’s longest-serving prime minister, provides some interesting political parallels to today’s United States — the rise of populism to give voice to those left behind, cries to scale back government, demands to unleash the economy to create jobs, et al.

David Cannadine does a masterful job of laying out Thatcher’s climb from a Grantham grocer’s daughter to Oxford and her fortuitous marriage to Dennis. His writing displays her intense focus alongside her slog through the backwaters of Conservative Party backbiting, skirmishes, battles and subterfuges to occupy 10 Downing Street, ultimately assessing Thatcher’s place in the world, then and now.

The reader does not have to be a student of United Kingdom politics, economy and most recent history to enjoy this work.

Cannadine, the Dodge professor of history at Princeton, is also the general editor of the Oxford Dictionary of National Biography.  What began as an extended entry on Thatcher became this book on the “Iron Lady.” For Winston Churchill, she was the most important person in the United Kingdom’s political life of the 20th century.

“Thatcher’s prime ministership combined a unique personal story with an extraordinary political dominance, and both were rendered the more remarkable on account of her gender.”

What would come as a surprise to many Americans who identify Thatcher with the firm resolve to remove the Argentine invaders from the Falkland Islands is what a close-run fight it was — starting from her government’s plan to cut spending by slashing the Royal Navy. The idea to cut the number of carriers from three to two, take down the number of frigates and destroyers from 59 to 50 and no longer send its ice patrol ship, which also monitored the Argentine military, into the South Atlantic led Leopoldo Galtieri, the leader of the junta in Buenos Aires, to believe he could successfully seize the islands.

The Ronald Reagan administration was split over what to do.  Many in the White House wanted to take a “hands off approach” because the United States was friends with both nations.

Across the Potomac River, “Caspar Weinberger took a very different view, covertly providing the [Royal Navy] task force with essential military assistance, including the use of America’s Ascension Island base in the mid-Atlantic for refueling, the accelerated provision of Sidewinder missiles, and unprecedented access to US intelligence.”

Thatcher basked in the triumph at home and abroad.

Until Mikhail Gorbachev began seeing eye-to-eye with Reagan, Thatcher was a major global political force — but with limitations, some of her own making over the future of Rhodesia now Zimbabwe, ending apartheid in South Africa and the “Troubles” on Northern Ireland.

As important a figure as she was on the international scene, even with her blind sides, it was her dominance of the Tories, her ceaseless studying of issues and personalities, her willingness to discard cabinet ministers like used tissue paper, her bashing of the trade unions starting with the coal miners  and the continuing split vote among the opposition that kept her in power.

For all the years in office and her survival in three national elections, she never once commanded a majority of the vote.  The Labor Party and the Social Democratic-Liberal Alliance provided the perfect foils of a divided opposition that allowed the Thatcher-led Conservative Party to win time and again.

“As her tenure at Downing Street lengthened, she made new enemies in her own party” and didn’t lose her old ones.  In the end, that spelled her end as party leader and prime minster.

Retirement was never easy for such a driven personality.

In Cannadine’s assessment, “the fact remains that Margaret Thatcher did more than anyone else to disrupt the political consensus that had existed from 1945 to 1979; she did shift the centre ground of public debate to the right.” He sees “Thatcherism” as a phenomenon of small government and open economy rather than a coherent philosophy.  Even with simple core beliefs, “when it came to cutting public spending and income tax, to selling off nationalized industries, and to dealing with Europe, she often made things up as she went along.”

Great political figures usually do — think Franklin Delano Roosevelt and the New Deal. Cannadine concluded “There are times when nations may need rough treatment for good and for ill.  Thatcher gave Britain plenty of that.”