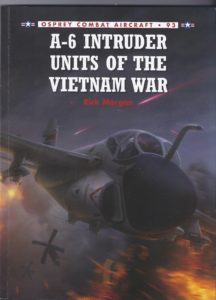 Grumman’s big, ugly carrier-based bomber has generated only a few books, including one done by this author and his brother Mark for Schiffer in 2004, a good book in a much larger format. A couple of wartime memoirs have also appeared to describe an individual’s experiences in Vietnam and Desert Storm. Rick Morgan, a Naval Flight Officer with time in several types, including the EA-6B Prowler, has written this much-anticipated title for Osprey, No. 93 in their Combat Aircraft series, and he has done an excellent job. (Morgan will write about the EA-6B in another volume in the series)

Gareth Hector’s cover illustration shows the iconic night mission flown by VA-196’s Charlie Hunter and Lyle Bull (both of whom achieved flag rank) against North Vietnamese ferry docks near Hanoi on October 30, 1967. The large shape of the black-nosed Intruder is highlighted by blasts of flak and SAM bursts as it thrusts out of the darkness.

From there we proceed to a typical, but no less fascinating and fact-filled text that describes the Intruder’s development and fleet introduction, along with the problems this advanced aircraft had during these early stages. It’s an interesting fact that the Intruder was never offered for export, while all its eventual companions like the F-4, F-8, and A-4 saw service with other countries.

The author sheds new light on the Marine side of the A-6 story, including that of the “electric A-6,” the EA-6A that fought the ECM war ahead of the more specialized EA-6B Prowler. He writes about the bombing missions flown deep into North Vietnam as part of Rolling Thunder because the Air Force generals couldn’t stand lacking such a big gun in their lineup and knew the Intruder could amplify the efforts of the F-105 and B-52 crews. Although the Marine Corps fought this predictable commandeering, almost piracy of their assets, the Leatherneck crews certainly showed what they and their mounts could do.

The Navy Intruder squadrons also gave good accounts of themselves, enduring serious losses as they fought their way in and out of thickets of flak and SAMs. It’s all here in 96 pages that cover the Vietnam combat career of this aircraft in a way never seen before. There are several excellent color profiles by Jim Laurier that show off not only the A-6’s unique lines but several examples of unusual underwing stores such as World War II era M66 2,000-pound bombs. This highlights the rather difficult period when full bomb loads were a rarity and made from stored caches of such ancient armaments. There are also various pods associated with specific missions. The folio of excellent artwork is not limited to just a lineup of the usual Mk 82s and fuel tanks. Osprey books make great use of the author-artist team in a way that many similarly intended books do not.