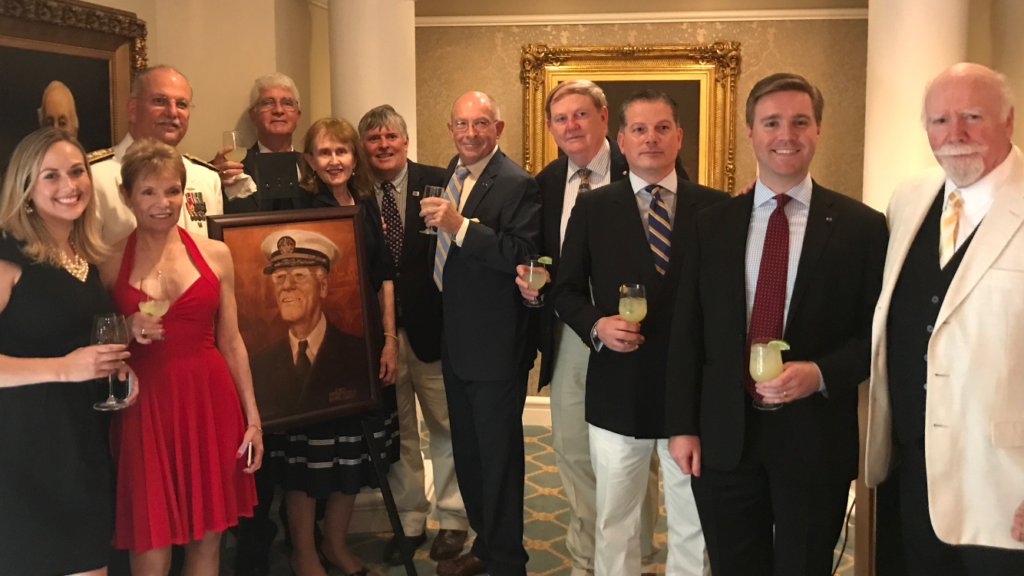 RADM Bruce Gillingham (3rd from left) with members of the Army and Navy Club, Naval Historical Foundation, and Naval Order of the United States, including CAPT Todd Creekman (4th from right, past Director of the Naval Historical Foundation), CAPT John Rodgaard (5th from right, Commander of the Washington Commandery of the Naval Order), and the portraitist, J. Hunter Gaul, III (1st from right) (Jay Gaul Photo)

On Friday, June 23, 2017, approximately 80 members of the Army and Navy Club of Washington, DC, the Navy’s Bureau of Medicine and Surgery, the Navy Historical Foundation, the Naval Order of the United States, and the Society for the History of Navy Medicine gathered to dedicate a new portrait of Admiral Lucius Johnson, Medical Corps, USN at the Army and Navy Club’s Daiquiri Lounge. Admiral Lucius Johnson (1882-1968) was a storied Naval officer who pioneered the use of Mobile Surgical Hospitals during World War II, and had served as the Officer-in-Charge of Construction for the Navy hospital project which today is known as the Walter Reed National Military Medical Center in Bethesda, MD. He also bears the distinct claim to fame in local lore as the first man to introduce the Daiquiri cocktail to the United States, the recipe for which he brought to the Army and Navy Club after a port call in Daiquiri, Cuba in 1909. The famous cocktail – made of rum, lime juice, and sugar – has become a favorite libation in the United States and is particularly appreciated in the summer months in Washington, DC, where it has remained popular.

The portrait was dedicated by Rear Admiral Bruce Gillingham, MC, USN, Deputy Chief of the Navy’s Bureau of Medicine and Surgery for Readiness and Health. After an introduction by MG Daniel Wright, President of the Army and Navy Club, RADM Gillingham delivered remarks about Admiral Johnson and the history of Navy Medicine and performed the dedication in the capacity of Acting Surgeon General of the Navy. A reception followed the dedication.

(LEFT) Portrait of Admiral Lucius Johnson, by J. Hunter Gaul, III, 2017;
(CENTER) The bartender at the Army and Navy Club’s Daiquiri Lounge, preparing one of the thousands of daiquiri cocktails that are prepared there each year; (RIGHT) The world-famous Daiquiri cocktail (Jay Gaul Photo)

The portrait was painted in oil by J. Hunter Gaul, III, a Pennsylvania portraitist and muralist and former Army officer. Over the course of his career, Mr. Gaul became particularly noted for portraits of prominent citizens of Philadelphia. The body of his work encompasses a broad range of subject matter, including the large 1969 mural of St. Barbara, patron saint of the artillery, which is kept at the Field Artillery School at Fort Sill, Oklahoma and is especially significant to the Order of St. Barbara, an honor society for Artillery officers of the Army and Marine Corps.

Jay Gaul, IV is a member of theWashington Commandery of the Naval Order and Army Navy Club.

Read our original article on the Navy Daiquiri as part of our CHOW series.