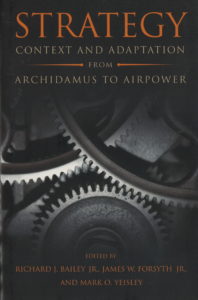 This collection of eleven essays by current or former faculty of the School of Advanced Air and Space Studies (SAASS) at Maxwell Air Force Base explores linkages between modern strategic thought and air power. It is deliberately not about what strategy is, but rather how one should think about strategy and seek to develop a successful strategy. As such, the authors often ask important questions, but provide only sparse answers to them. As several of the contributors affirm, strategy lacks a clear, agreed upon definition – at least in a military context – though there is general agreement on what strategic thought involves. Addressing topics ranging from technology, cyber and space warfare to insurgency, realism, and strategic theory, each author presents his vision of what strategy involves, but all agree that strategy is dependent on context and requires adaptation to changing conditions.

Introductory essays, such as Everett Carl Dolman’s “Seeking Strategy,” discuss strategy as an “emergent property” and “plan for continuing advantage,” separate it from tactics, “maximizing means toward given ends,” and emphasize that strategists operate in the “realm of uncertainty.” Harold R. Winton assesses the utility of strategic education and theory by comparing George Patton and Ulysses S. Grant as strategists and assesses recent Army and Air Force doctrinal statements, though he strangely fails to link these discussions. Richard R. Muller’s thoughtful essay provides an overview of air power history and describes and analyzes the general neglect of historical study by the institutions of the U.S. Air Force, even in strategic education, which marked a sharp break with traditions of strategic education dating to Prussia’s war college. After its 1991 founding, SAASS’s faculty, he explains, worked hard to wipe away the reputation of Air Force graduate study as “Air Command and Golf,” by deepening their studies of history and strategy and how the one informs the other. Stephen E. Wright’s concluding essay returns to some of Muller’s points, noting that the Air Force and other military services favor technically skilled linear thinkers, what Samuel Huntington referred to as “technicism,” over the creative, non-linear thought often required to produce sound and effective strategy. These problems appear in the essay on technology and strategy, which notes the debates between determinists and constructivists, but fails to tie it to military matters, and ignores numerous important works on technology, innovation, and the military, particularly John Ellis’s classic Social History of the Machine Gun (1986) and the much lauded Military Innovation in the Interwar Period (1998) by Williamson Murray and Allen Millett, as well as their three-volume Military Effectiveness (1988), which has much to say on these matters.

While several authors ground their approach to modern strategy in antiquity, such as such as James Wood Forsyth’s critique of Realism, which relies heavily on Thucydides, the collection’s best works are those that focus mostly on the present and near future, such as the discussions of insurgency, cyber warfare, space, which M. V. Smith points out has already been militarized. Space power is used both to gather information and befuddle enemies, and can be an effective deterrent. War in space, which targets satellites, also has advantage of being casualty free. Richard J. Baily, Jr. provides an interesting discussion of cyber warfare, which addresses the important question of whether existing governmental and military structures can effectively support either offensive or defensive cyber warfare.

Mark O. Yeisley addresses irregular warfare in a wide-ranging essay that is thoroughly grounded in scholarly literature and expounds on the central concepts of counterinsurgency. As he notes, the threat from non-state actors remains undiminished. The population is the center of gravity in these conflicts and successfully using air power without alienating local populations remains difficult. Nonetheless, he claims U.S. air power has performed “brilliantly” in recent irregular conflicts. That claim, along with the role air power should play in these conflicts, could have used more detailed discussion.

The book’s intended audience is unclear, but appears to be young officers and graduate students new to strategic studies, presumably students at SAASS, which several of the authors call “the Department of Defense’s premier school of strategy.” I suspect faculty at the Naval War College and Army War College would hotly contest this claim.

Like the character Vizzini in the Princess Bride (1973), some of the essayists display a truly dizzying intellect, whizzing among topics, but rarely staying put long enough to fully explicate any of them. Analysis is sometimes stilted and incomplete, and some authors rely on rather dated scholarship. Numerous important works are overlooked, among them Byzantium’s rich strategic literature, and important books by Michael Handel, Williamson Murray, and other recent strategic theorists. Nonetheless, several of the essays are quite good and well worth reading, particularly Muller’s critical discussion of the use of history in the Air Force and the essays on insurgency, cyber warfare, and space power.

Dr. Stein teaches at the University of Memphis.