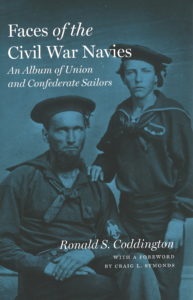 Ronald S. Coddington has chronicled the lives of dozens of Confederate and Union sailors in the War of the Rebellion (1861-1865) in his magnificent photographic and narrative history. In the Foreword, Professor Craig L. Symonds traced the general backgrounds of the 100,000 sailors who fought in the Atlantic, Pacific, Gulf, bay, lake and river realms.

The author acknowledged the patriotism of the sailors in the War between the States, and explained how they “fought with courage in scenes of carnage on blood-soaked decks, and died from wounds and disease.” Sailors like Lt. John Grimball, a U.S. Naval Academy graduate who joined the Confederate States Navy when South Carolina seceded from the Union, fought from a shore battery to drive off the Union merchant ship Star of the West when that vessel and crew attempted to deliver supplies to the federal Fort Sumter in Charleston Harbor. Grimball would serve on CSS Shenandoah on its Pacific and Bering Sea/Arctic raids upon Union commercial vessels and whaling ships.

Executive Officer Lt. William C. Whittle assisted Commander James W. Waddell on CSS Shenandoah. The officers belatedly found out from newspapers and captured crews that the Civil War had ended several weeks before they stopped their vessel captures, requiring them to navigate their warship back to Britain, surrender to authorities, and escape to other nations until they received U.S. pardons. Coddington traced Whittle’s post-war career and authorship of Cruises of Confederate States Steamers. Whittle died in 1920 at the age of 79 in Norfolk, Virginia.

William W. Heavener (USN), ships cook, sailed into the Gulf of Mexico and up the Mississippi River on the small warship USS Katahdin battling past two Confederate forts as part of the U.S. Navy Squadron of Rear Adm. David Farragut and his flagship USS Hartford. Farragut led naval, army and marine units and transports to occupy the Confederate port of New Orleans in 1862. Heavener was a ships carpenter after the war. He died 1924 at age 84.

Midshipman Francis B. Beville (CSN) was captured by Union forces while commanding a guard boat off the Georgia coast. Before that naval assignment, Beville was severely wounded as a member of the Eighth Georgia Infantry. Beville was in a naval brigade that fought bravely and surrendered at Sailor’s Creek, Virginia in 1865. After the war, Beville was a successful hotel entrepreneur. He died in 1905.

Coddington traced the first Union naval shot of the Civil War to Charleston Harbor on 12 April 1861. That shot was fired by the crew of the U.S. Revenue Cutter Harriet Lane, under the command of Captain John Faunce. Captain Faunce would continue his extraordinary career in the Service that would become the U.S. Coast Guard.

Ronald Coddington has preserved the maritime side of the war with his creative use of what has been described as his “haunting photographs” of the sailors who fought, died, and survived in the War Between the States.