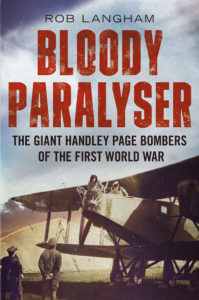 It is not always appreciated that the Admiralty was the first of the British Service Departments to recognize the potentialities of the large aeroplane for long-range bombing work as early as December 1914. It should also be of interest to our readers that what might be the first strategic aerial bombing campaigns were flown by a naval service’s aircraft and crew, including American flight crewmen—mainly U.S. Naval Air Reservists–on exchange tours with their British compatriots.

This new book describes the design and eventual squadron service of what was one of the largest aircraft in World War I. Actually, only the German Zeppelin (Staaken) R. VI had greater length and wing span. These large aircraft were not built in great numbers, with quite a few were lost on operations, either in combat or often in operational mishaps. The art of flying, itself, was still being learned, usually in smaller aircraft types. Handling a hulking multi-seat, multi-engine design without the help of hydraulic assist that became so common in later aircraft, calling for physical strength and coordination, often at night in adverse weather or combat conditions was sometimes beyond the skill and experience of the young aviators of the time.

The book’s title comes from the British requirement for “a bloody paralyser [sic] of an aeroplane” to use against the Germans.

As the Allies, especially the British and then the Americans, began thinking about what to do about the German submarine menace, the question of how to organize a response that included men, both flight crews and ground troops, and of course, the aircraft needed, generated several considerations. The British wanted to strike the enemy sub pens with the newly-introduced weapon of the heavy bomber. Handley-Page had designed a huge (for the time) twin-engine bomber, the O/100 that could carry sixteen 112-pound bombs as well as five defensive machine guns. Its maximum speed of 85 mph might not have been anything to crow about but it was an imposing machine.

The designation O/100 was a uniquely British invention. The British used an alphabetic sequence to designate new designs, and “100” indicated—in this case—the particular type’s wingspan in feet. Thus, the “O” model had a 100-foot wingspan. However, later models of the bomber, the O/400, and the V/1500, which were entering service at war’s end, used the numbers to indicate the combined horsepower of its engines. The “V” model used four 375-hp engines and was just entering service when the armistice took effect on November 11, 1918.

The O/100s had a somewhat checkered career. The third aircraft fell into enemy hands on January 1, 1917, because of a navigational error on the part of the crew. They started flying their intended mission, namely bombing the submarine pens in Belgium, and then rail centers and airdromes (airfields) used by Gotha bombers, the opposite numbers of the O/100 that were bombing London.

The strangest feature of the operation was that the Royal Naval Air Service (RNAS) flew the Handley-Pages. They were naval aircraft first flown by British crews but later, American naval aviators occasionally flew sorties with their allies. These newly designated officer pilots often serving as gunners (often called gunlayers), but the Americans sometimes took their turn at the wheel of the huge bombers. It was a valuable experience that would serve the young Americans well.

The author uses first-person quotes from various historical files filled with the experiences of these young aviators determined to learn how to handle these huge aerial “beasts” and fly them to their important industrial targets, deliver their bombs, and then bring back themselves and their valuable aircraft. It wasn’t always that simple. Weather, distance, and skill often combined to abort or change the missions so that several of the big Handley Page bombers were lost. The first mission even ended in an O/100 inadvertently landing at an enemy airdrome, delivering a brand-new bomber right to a German doorstep. (Of course, there is the occasion in 1942 where a wayward German pilot landed his equally new Focke-Wulf 190 at a British airfield, providing his enemy with a flyable example of the latest Nazi high-performance fighter.)

The author brings out an interesting point that at least one of the Handley Page squadrons, No. 7, RNAS, later 207 Squadron, RAF, flew a mix of different aircraft that might be called in today’s parlance light attack with FE.2b two-man bombers, equipped with pusher engines, alongside the new heavy bombers, the O/100s and later O/400s. All while the squadron was developing its technique or attack strategies.

We also learn about experiments using Handley Pages with increased armament as “gunships,” which is reminiscent of the XB-40, up-gunned model of the B-17 during World War II used as escorts for the large fleets of Flying Fortresses beginning to flying the USAAF day strategic bombing campaign over Europe.

More photos would have been good, and an index would have also been most useful in a work such as this. But readers with interests in World War I aviation or the strategic development bombing in the early years of manned flight will find a lot of material in this book.