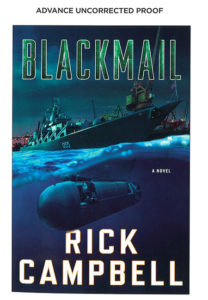 Having read and reviewed one or two of his previous tales, Cdr. Rick Campbell’s latest, BLACKMAIL is in my opinion, his best by a long shot. And unfortunately, it is, in large part, the most credible.

While Campbell’s background is in submarines, they are only a part of the action in this book, augmenting both the land-based and carrier portions of this action-packed thriller. The premise, without giving too much away, is essentially World War III set mainly in the Arabian Sea – at least for the ship and battle scenes. The action moves logically and fluidly ashore when necessary, aiding and augmenting the plot. Politics, behind-the-scenes guerilla warfare, and international intrigue all turn up and are well done.

The story unfolds with an “accidental” attack on a U.S. carrier patrolling in WestPac; the United States is not in a position to retaliate immediately due to the weakened state of our forces, the result of a prolonged war with China. Political unrest in Europe allows Russia to move troops into large portions of what used to be the Soviet Union, more or less unopposed. Then Russia announces they have sabotaged the world’s major oil pipelines which, if their explosives are activated, will essentially shut down the industrial world’s economies. The conundrum for the United States is what to do about it, and who to ask for help. Any obvious course of action seems to offer dire consequences. Of course, Russia is out there bribing those same nations NOT to help.

Campbell brings back several of his earlier characters, including National Security Advisor Christine O’Connor, who readers met in his previous book, Ice Station Nautilus. Several of the president’s staff reappear as well. The story is clever, with credible dialogue, and without the overbearing professional knowledge the author possesses.

I suspect Commander Campbell had fun writing this story; I know I certainly had fun reading it. As I was provided an advance proof, there were no maps or tables in it which will surely help future readers. I highly recommend Blackmail to any who fancy the action/political thriller genre; it will not disappoint.