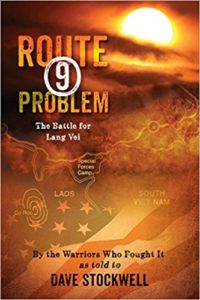 The Vietnam War (roughly 1964-1973) was not only a series of albeit hard-fought, bloody aerial campaigns by aircrews who flew from hot, humid airfields throughout Southeast Asia, or the equally hot, humid undulating flight decks of Seventh Fleet carriers in the South China Sea. These long collections of unending sorties were often in concert with terribly bloody and non-productive battles that resulted in a terrible waste of human lives on both sides. These confrontations in the steaming, mind-boiling jungles of the Vietnam peninsula and its surrounding countries of Laos and Cambodia, sometimes overflowing into Thailand, made the newspaper headlines to add to the confusion and heartache of the people at home.

Perhaps one of the bloodiest campaigns of the Vietnam War was the siege of the base at Khe Sanh in the northwestern highlands of South Vietnam Lasting some 77 days beginning in February 1968, the battle had several battles that occurred outside the main base of Khe Sanh Combat Base (KSCB), manned mostly by Marines. The North Vietnamese Army (NVA) and their Viet Cong minions struck at night and at times seemed poised to overwhelm the American defenders. Outside the barbed wire surrounding the camp, several other battles developed, one of which was the smaller collections of sites that made up Lang Vei on Route 9, west of KSCB. In the early hours of February 8, 1968, one of the first engagements—in this case with amphibious PT-76 tanks—forded streams and small rivers to bring their 76mm cannon to bear on American troops.

In a way, Route 9 Problem brings the two venues together during a very intense period, namely the 1968 Tet New Year, arguably one of the most hard-fought period of the war where ground battles raged the length and breadth of South Vietnam as the communist insurgents struggled to gain a strong foothold in the south and oust the powerful American presence.

The action around Lang Vei and Khe Sanh rapidly increased as the NVA sent in a force of PT-76s that advanced on American positions at night. The tank fire, augmented by ground troops that followed behind the communist armor, resulted in the first major casualties in the ranks of the Americans and their South Vietnamese allies. A few tanks were destroyed, but the outlook quickly became very grim and the Green Berets began calling for close air support.

As he builds his narrative, the author brings in the timely arrival of Navy A-1 Skyraiders from VA-25 (Fist of the Fleet) flying from USS Coral Sea. (CVA 43). Although the A-1 had been in the war since the earliest beginnings, its low speed in comparison with more modern jets it was now sharing the carrier flight deck with had put the once- 20-year-old veteran at a disadvantage when flying into the dangerous thickets of enemy flak and SAM envelopes. The A-1 had been relegated to targets south of the Demilitarized Zone (DMZ) that separated the two Vietnams. But the Spad’s pilots were always ready and able to respond when needed. And this was going to be one of those desperate times. However, although the A-1 might have been approaching obsolescence, it still retained its degree of maneuverability and toughness that its jet cohorts did not. Both advantages would be sorely needed over Lang Vei.

As it happened, a section (two planes) of Fist of the Fleet Spads was right where it was needed when the FAC orbiting over the Green Beret camp at Lang Vei called for help from anyone in the area. LCdr. Rosario “Zip” Rausa quickly acknowledged and took his section down below the low clouds and proceeded to make multiple passes with bombs and especially 20mm cannon fire over the advancing communist troops. He and his wingman, Ltjg. Lawrence E. Gardiner, known as “Leg” because of his initials, gave the Army troops much-needed respite. Rausa and Gardiner were replaced by other VA-25 aviators.

Strangely, and rather unfortunately, Stockwell reports that while Rausa’s efforts were praised by his compatriots and especially the Green Berets, senior leaders were unhappy that he had busted minimums and gone below the clouds that hung so low over the battlefield. Even today, some 50 years later, efforts to augment the courageous Fist pilots’ meager Air Medal in favor of a higher award have been denied. It is hard to figure this lack of appreciation of the risk taken by an experienced aviator to help fellow Americans in danger of being overrun by fearsome enemy forces where ultimate defense was only available from the air and only at that immediate time.

Marine helicopters played an important role toward the end of the action at Lang Vei when VMO-6 and HMM-262 crews flew UH-1s and CH-46s, respectively, into the battered base to airlift survivors out of harm’s way,

This heavily-researched book is loaded with details of NVA tactics and equipment. The descriptions of the U.S. participants are equally impressive. Dave Stockwell tells a great story, details of which may not have been available or even considered by many people interested in the Vietnam War, or even many Vietnam veterans. It is available through the website: www.langveibattle.com, as well as other commercial book and ebook sites.

A 1967 graduate of the Rhode Island School of Design, as well as a 1968 graduate of AOCS, retired Cdr. Peter B. Mersky holds an FAA commercial/instrument rating and has flown in many front-line aircraft of their time. He has written 16 books, more than 100 magazine articles, and more than 700 book reviews for various magazines, as well as his own book review column for Naval Aviation News since 1982. He was also the editor of Approach magazine when he retired in 2000 with more than 32 years of Federal service.