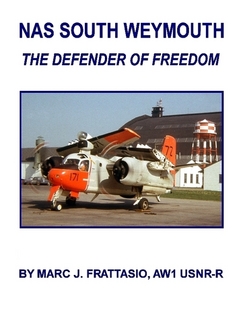 When you get a huge book like this with more than 700 heavily illustrated pages, it is a true labor of love. The author is a retired P-3 aircrewman and knows of which he writes. His wife is also a retired aviation storekeeper (AK) who helped maintain her husband’s P-3s at NAS South Weymouth. He has also written several other books about the Naval Air Reserve in New England, primarily in the Boston area. This book is self-published; therefore, it allows the author to write candidly and include the necessary coverage in the text and photographs that the subject requires.

Although “SoWey” closed in 1997, after a 60-year history, it lives on in the Shea Museum on the grounds of the NAS, and in the memories of the Navy and Marine Corps vets and civilians who worked at the air station. Their enthusiastic support of this grassroots assembly of memorabilia has resulted in a remarkable display that is a popular site in the Bay State area. It is named for Commander John Shea, one of the best-known Naval Air reservists who was killed in action in 1942 aboard the USS Wasp (CV 7).

This book is a wonderful trip down memory lane, especially if you know anything about New England Naval Aviation, Fleet and Reserve. Planes, places, and people are at the heart of every page. Begun in September 1941 near the town of Weymouth south of Boston, just north of the entrance to Cape Cod, NAS South Weymouth became the northeastern base for the Navy’s fleet of airships that were necessary to provide protection against the growing threat of German U-boats prowling off the U.S. coast. The tract of 1,257 acres was a desirable and accessible plot, and by the time the station opened, the cost had risen from $5 million to $6 million, nearly $100 million in today’s inflated dollars.

The author spares no effort in telling the story of the air station and its role in the U.S. preparation before World War II. With the loss of 115 crewmembers during the sinking of USS Reuben James (DD 245) on October 31, 1941, and President Franklin D. Roosevelt repealing most of the Neutrality Act, construction of South Weymouth took on an important role. (If you are interested, find the popular folk song about the loss of the Reuben James, sung by “The Weavers” song group)

Frattasio describes the establishment of the blimp squadron ZP-11 in June 1942 and its patrols off the northeast U.S. coast. Rare photos complement the text. The station’s iconic huge, black LTA (lighter-than-air) hangar that stood for so many years until December 1966.

Postwar development, aircraft and the growth of the Naval Air Reserve in the northeast receive in-depth treatment. Photos of regular air shows in the 1950s display a vast panorama of cars and planes reminiscent of the events we see today at Miramar, Andrews, Norfolk and Oceana when the Navy shows off its pride and fleet of aircraft.

Occasional deployments fill the text as the U.S. responded to international crises like the 1961 building of the Berlin wall, which resulted in Naval Air Reserve mobilization that included SoWey’s S2F and P2V squadrons. Information about the early Southeast Asia reserve airlift, a program vital to the initial buildup in August 1964 in Vietnam, is among the most detailed I have seen and certainly fill in many gaps in the story.

The 1968 Pueblo Crisis and recall are also discussed. The disappointing recall of six NAR squadrons reorganized the Naval Air Reserve, and that story is also addressed. New squadrons and aircraft changed the look of the South Weymouth reserves.

The VP-MAU (Master Augment Unit) came along in January 1984, and it was a significant development for the P-3 squadrons. As we go through their post-Korea period, SoWey became more focused on the ASW mission with aircraft like the S-2, P-2, P-3 from the station. HS-74 flew H-3 helicopters, but eventually became HSL-74 and transitioned to the SH-2 LAMPS helo.

South Weymouth also had an active Marine Corps Reserve presence, and the author doesn’t forget it. VMA-322 flew A-4s while HML-771’s UH-1Es were busy as well.

This new book tells South Weymouth’s story in full. The author has given himself a very broad canvas on which to paint his equally large wide-ranging account. He tells his story well. After all, he was there and knows his subject well.

A 1967 graduate of the Rhode Island School of Design, as well as a 1968 graduate of AOCS,  Cdr. Mersky holds an FAA commercial/instrument rating and has flown in many front-line aircraft of their time. He has written 16 books, more than 100 magazine articles, and more than 700 book reviews for various magazines, as well as his book review column for Naval Aviation News since 1982. He was also the editor of Approach magazine when he retired in 2000 with more than 32 years of Federal service.