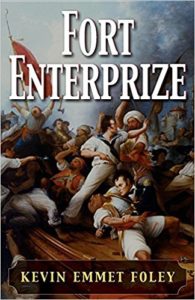 Fort Enterprize is listed and sold as “historical fiction.” It is certainly fiction, but its historical claim leaves much to be desired. When a writer injects a fictitious character or several into an accurately portrayed historical context, it’s historical fiction; when a writer changes or fictionalizes real history, that becomes something else entirely. In this case, Mr. Foley has taken some marvelous naval and U.S. history and trivialized it by creating “new events” in which real characters play a role. Injecting his lead character, Presley Neville O’Bannon, U.S. Marine, into completely false scenarios because “…I am certain this valiant United States Marine would have wanted to be in the thick of things” is irresponsible and outrageous. O’Bannon’s service in the (misrepresented) march across the desert is heroic enough; his character needs no bolstering from the author.

While author Foley has offered an interesting tale of derring-do during the first Barbary Wars, his knowledge of things maritime, naval, and, yes, historical, is sadly lacking. A couple of brief examples: early in the story, Foley refers to a “first mate” on a U.S. Navy warship and compounds the error by calling him a “warrant officer.” He often refers to someone being “court marshalled,” as opposed to court martialed.” A competent editor should have picked this up, along with the many other “word errors” found throughout the text. A common error made by writers about this period, including Foley, is the use of “USS” relating to navy ships; that designation didn’t come into usage until Teddy Roosevelt was President. Foley repeatedly refers to junior officers with the rank of “ensign,” a rank that did not come into being until the Civil War. I mention these somewhat trivial offenses (the tip of the iceberg) because they annoy a knowledgeable reader and are easily avoided with a minimum amount of research. The use of vulgar language by real senior officers at that time was unheard of, but Foley brings their speech into the 21st century with some remarkably foul dialog.

Foley mentions the attack of the fire/bomb ship Intrepid in Tripoli Harbor, but changes not only the details of the event, but puts a totally different officer, Henry Wadsworth, instead of the real commander, Richard Somers, in command for no apparent reason except possibly his already proven aversion to research.

The format of the story is interesting and imaginative and, while this effort makes for an often-exciting tale of heroism and courage, mistaking it for any kind of history will lead to disappointment for an informed reader.

White is an accomplished fictional writer of the early 19th century and member of the Foundation’s Holloway Society.