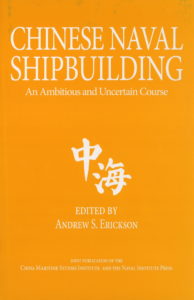 On April 26, China’s first indigenously-built aircraft carrier, still lacking a name, slipped into the sea. The smart-looking vessel bears a strong resemblance to China’s only operational carrier, built by the Soviets and bought from Ukraine. This new ship will probably require another three years of finishing up and trials, but already indicates China’s naval ambitions. But how effective will it be? Will its engines perform efficiently and not break down? Will its radars and electronics meet their goals? The measure of a warship is more than how impressive it looks.

Chinese Naval Shipbuilding: An Ambitious and Uncertain Course, edited by noted Chinese naval expert Andrew S. Erickson, is a detailed book covering a wide range of issues on the development of a modern Chinese navy. Published by the Naval Institute Press, the book is part of a series on Studies in Chinese Maritime Development produced by the China Maritime Studies Institute, which established in 2006 at the Naval War College.

The book is divided into four parts: Foundation and Resources; Shipyard Infrastructure; Naval Architecture and Design; Remaining Shipbuilding Challenges; and Conclusions and Alternative Futures. Some of the authors will be recognizable to those familiar with naval analysis whereas others work in more obscure and specialized fields. The book runs slightly over 330 pages, and each essay runs about 10-20 pages and includes footnotes, many in Chinese.

The essays provide a detailed and often nuanced picture of a Chinese navy that may look increasingly impressive but suffer from problems such as quality control and limited systems engineering experience. Indeed, the Chinese themselves have acknowledged some of their limitations.

Although the book includes several tables on such subjects as the number of vessels produced by Chinese shipyards and estimates of Chinese government investment in shipbuilding, somewhat surprisingly it lacks any line drawings or photographs of Chinese naval vessels. And while this may be an odd criticism, for such an intriguing subject, the book cover is boring and hard to read.

In January, Defense News interviewed Vice Admiral Tom Rowden, Commander, US Naval Forces. The publication asked him about a report that China had commissioned a 4,000-ton frigate in February 2016 and six weeks later sent it on a 7-month deployment, something that takes the U.S. Navy a year or more to do. Rowden’s reply is worth repeating at length:

“Two gray ships riding on the sea go by. They’ve got a bunch of flags flying and a bunch of sailors up on deck. One of them couldn’t fight their way out of a wet paper bag and the other one will rock anything that it comes up against. Could we commission a guided-missile destroyer and steam it out of the harbor and take it on a world cruise? Yeah, I could. But in that situation I would not be taking care of what I refer to as the center of the universe. I want those men and women on that ship to be 100 percent confident in the ship and confident in the execution of any mission leadership may give them. So what are the Chinese thinking? I don’t know anything about it. I would tell you that I find it kind of interesting they feel they have to do that. To what end? I don’t know.”

Hopefully, we’ll get more books like Chinese Naval Shipbuilding to help us figure that out.

Dr. Day is a senior program officer at the Aeronautics and Space Engineering Board of the National Academies of Sciences, Engineering and Medicine where he advises NASA and the U.S. Air Force on space programs. He can be reached at zirconic1@cox.net.