In April 1988, Cdr. Arthur N. Langston was embarked on the carrier Enterprise – his first deployment on the famed carrier – and recalled how naval aviation came into play during Operation Praying Mantis. On April 14, the frigate Samuel B. Roberts struck an Iranian-laid mine in the Persian Gulf. In retaliation, on April 18, the United States sent two surface action groups to attack Iranian oil platforms converted into military outposts. Following the takedown of the oil platforms, the Iranians attempted to counterattack and lost the corvette Joshan and sustained damage to an F-4 Phantom due to missiles and gunfire from the U.S. Navy’s surface combatants. The U.S. Navy had hoped to draw the Iranian frigates Sahand and Sabalan into the fray. In preparation, Enterprise had a 16 airplane strike ready to launch at dawn. However, as the surface ships worked over the oil platforms, there was no sign of the Iranian frigates. Patrolling aircraft continued to provide negative sighting reports. Langston recalled.

I was the Deputy Air Wing Commander for Carrier Air Wing Eleven. I flew with the two F-14 squadrons and the A-6 squadron during the cruise. I was the air wing strike leader for the operation, and since it was a strike mission to sink the Iranian Frigate Sabalan, I was flying the lead Attack Squadron Ninety-Five (VA-95) A-6 aircraft loaded with ordnance for sinking the ship. 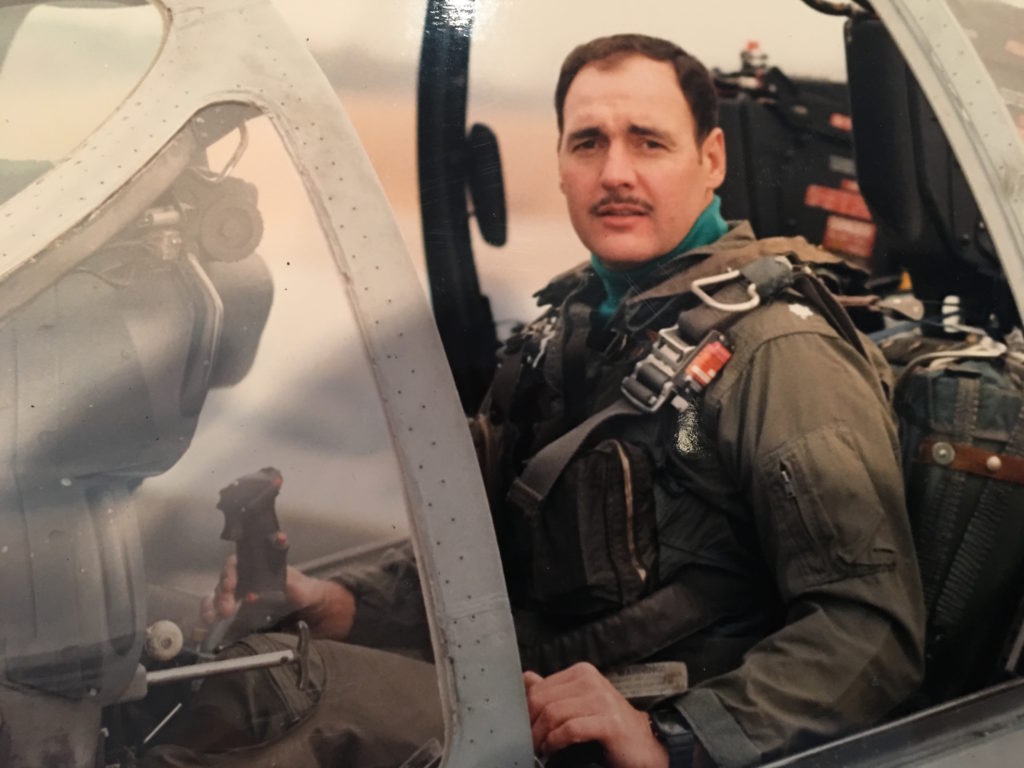 I had joined the Air Wing Eleven (CVW-11) attached to Enterprise twenty months prior, so I felt a great deal of pride deploying on the first nuclear carrier and fastest carrier in the fleet.

Two days after the Samuel B. Roberts hit the mine, the Enterprise Battle Group received voice heads up from Vice Adm. (Tony) Less to prepare for a possible “War at Sea Strike” to sink the Iranian frigate Sabalan. This particular frigate was singled out by the Chairman of the Joint Chiefs, Adm. William Crowe, because of the ship’s ruthless attacks against unarmed merchants in the Gulf, targeting bridge and crew quarters with RPG rounds and gunfire specifically aimed at killing ship crews. This verbal Warning Order was followed up on the evening of April 17 by the Operation Praying Mantis Operations Order, calling for Enterprise and her embarked air wing to have Combat Air Patrol/Surface Attack Combat Air Patrol (CAP/SUCAP) package of combat aircraft over the Strait of Hormuz the next morning at 0800, with a follow-on War at Sea Strike Group on ready alert.  As strike leader, I felt Operation Praying Mantis was more than just retaliation for the Samuel B. Roberts because it was also an opportunity to regain American national pride.  America had been suffering Iranian humiliation beginning with their taking our embassy personnel hostage, the hostage rescue failure of Operation Eagle Claw at Desert One, and the more recent the attacks and continuous harassment of oil tankers in the Gulf. America was portrayed as the ‘Paper Tiger’ in large part because of these Iranian actions.  Operation Praying Mantis gave the US Navy the opportunity for America to regain credibility, and credibility is directly linked to restoring our national pride. 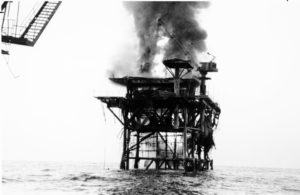 An Iranian command and control platform is set afire after being shelled by four U.S. Navy destroyers. (USN Photo # DN-SC–88-01043)

We refined the plans all day and into the evening of April 17. As the senior aviator and strike leader of the War at Sea strike, I briefed the Battle Group Staff, the “Super” Carrier Air Wing Commander, the carrier commander, and Rear Adm. (Ray) Zeller later that night.  The carrier ordnance crews were already building the aircraft ordnance requirements and staging it on the flight deck. Handlers were putting the aircraft in place, and squadron ordinance crews began uploading the ordnance to the aircraft. Plane captains prepared their aircraft for an early morning launch.

At the brief, we learned that Intel had lost the position that we had that night for the Sabalan and didn’t have a position for either of the Iranian Saam-class light frigates. We modified the launch plan to hold the War at Sea Strike on 30-minute alert and launched the E-2s and CAP/SUCAP package as planned.

The Battle Group followed the actions of the Surface Action Group in the Gulf and the Marine Helicopter attack on the converted oil platforms.

We sent out additional A-6 aircraft in the morning to search for the Sabalan. By noon we still didn’t have contact with Sabalan, and we got word about the SUCAP engaging Iranian Boghammer attack boats and plenty of air activity with Iranian F-4 aircraft flying out of Bander Abbas.

It was about noon when VA-95 ran out of up A-6’s except for two A-6 aircraft loaded for the War at Sea Strike. We decided to launch me and my Bombardier Navigator (B/N) in the Strike Lead aircraft on surface search mission with two F-14, and EA-6 as escorts.

Shortly after takeoff, the Battle Group air intelligence officer (E-2) alerted us and the carrier of indications that a Saam-class frigate in Banbar Abbas was getting underway.  We were already approaching Strait of Hormuz when the signals collection aircraft from VAQ-135 informed me they confirmed a Saam frigate electronic emission at a 2:00 position. My B/N confirmed radar contact and forward-looking infrared imagery (FLIR) of possibly the frigate Sabalan coming out of port at Bandar Abbas making about thirty knots.  It was difficult getting a visual to sufficiently identify the ship because of the milk bowl low horizontal visibility in the Gulf.

Positive identification was mandatory. I made the decision to fly close aboard the ship to visually ID it even though we would be vulnerable to attack. I put the A-6 in steep dive five miles astern of the target ship leveling out below 100 feet elevation at 500 knots. As we approached about a mile astern, the ship opened up with AAA and possibly shoulder-fired anti-aircraft missiles or rocket-propelled grenades. 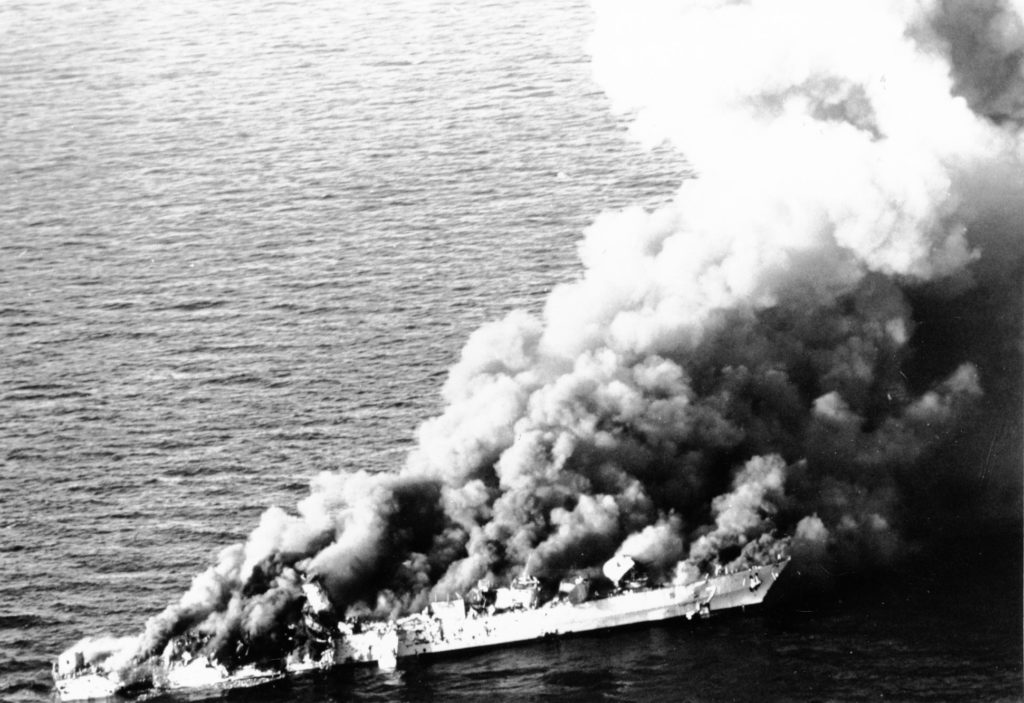 The Iranian frigate IS Sahand (74) burns after being attacked by aircraft of Carrier Air Wing II from the nuclear-powered aircraft carrier USS Enterprise (CVN-65), in retaliation for the mining of the guided missile frigate USS Samuel B. Roberts (FFG-58). The ship was hit by three Harpoon missiles plus cluster bombs. (USN Photo # DN-SN-89–3122)

We went by the ship’s port side at deck level which had Sabalan’s number on its hull. Bright AAA muzzle flashes and tracers passed behind us as the Iranian gunners failed to lead their shots.

We egressed out twenty miles, called the E-2 on positive ID and told them to pass to the Enterprise:  ‘launch the Strike Group.’ I then came up UHF Guard channel and told the Sabalan that they had five minutes to abandon ship because I was going to sink them.

We didn’t see anyone abandoning ship after ten or so minutes, so we made a Harpoon attack. The missile failed to launch so we had to go out again reset all the ordnance switches and make another run. This time, the missile locked on and launched correctly. We watched the Harpoon skim low on the water and impact the frigate behind the bridge. Fire and billowing black smoke came from the explosion and the ship went dead in the water. We made another attack run with the Skipper rocket assisted bombs and a laser guided bomb.

By this time, I could hear the Walleye-equipped A-7s calling in hot followed by the A-6 calling out the Harpoon attack. One Walleye hit the front gun turret in a massive explosion, knocking it partially off the deck. Subsequent hits put the ship further ablaze as the remaining four A-7s rolled in with their strings of 500-pound bombs. The ship remained on fire and listed heavily but did not sink as the attack ended and the strike group egressed.

As we climbed back to altitude en route back to Enterprise, I heard the E-2 report another frigate coming out of Bandar Abass at high speed behind the track of what I thought was the Sabalan. One of the A-6 SUCAP aircraft flew overhead it and took fire from the frigate. In accordance with the rules of engagement calling for immediate retaliation, the A-6 attacked with 500 pound LGB hitting the ship right at the stack. They saw flames and smoke explode from the impact and the ship went dead in the water. The ship had the Hull number of the Sahand. The A-6 called on UHF Command Net asking permission to continue the attack to sink the frigate. This transmission was heard by Admiral Less, the War Room in the Pentagon and the White House Crisis Room with President Reagan listening. President Reagan intervened and told Admiral Crowe to call off the attack saying the Iranian’s had enough for one day.

It wasn’t until we got back to the ship later that night that the Sahand was the ship hit by the War at Sea Strike and the Sabalan was the Frigate hit by the single LGB.  It took the Sahand several hours into the evening before it rolled over and went to the bottom.

Years later after declassification, a CIA report was revealed which exposed how Iran thought Operation Praying Mantis was a coordinated strike with Iraq, the US Navy from the south and Iraq from the north. The Iran-Iraq war had been going on for some eight years in its northern border with Iraq.  By pure coincidence on the morning of April 18, 1988, Iraq launched a major offensive across Iran’s disputed northwest border.

Iranian Intel had mistakenly told the Ayatollah that Saddam and US had formed a pact to take on Iran from north and southern fronts.  The tragic shoot-down of an airliner by Vincennes further convinced Ayatollah that U.S. was going to continue from the South. Knowing that they could not win against two major fronts, Iran sued for peace with Iraq a month later. I was most pleased to learn that Operation Praying Mantis had served to both restore America’s national pride and also stopped the long Iran-Iraq war that had killed hundreds of thousands of soldiers and civilians.

As a result of the success of Operation Praying Mantis, the US Navy had no adverse encounters with Iran in the Gulf for more than two decades. The tactical success of Enterprise Battle Group was only exceeded by our opportunity defend our nation’s honor.

Rear Admiral Langston is the President of the Naval Historical Foundation.