Photo archivists at the Naval History and Heritage Command recently posted three new digital exhibits highlighting a variety of interesting and insightful subjects on the history and organization of the United States Navy. These presentations help transform photographs from their two-dimensional state into a fun and interactive learning experience for anyone interested in learning more about the Navy’s important history.

According to head archivist Lisa Crunk, the idea of an interactive digital online collection spawned out of their fellow archivist’s collective desire “to be able to bring to the public a more interactive and informative way to view the collections held in the photo archive.” Using GIS Story Map software, photo archivists worked hard to turn traditional static photo galleries into a story-like presentation. For lack of a better phrase, photos languishing in the digital backroads of the site have a new and fresh take on their interpretation. 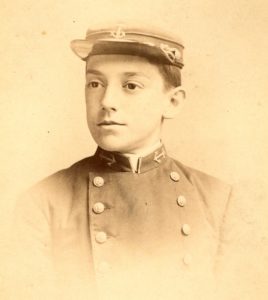 The United States Navy Academy Class of 1892 – Careers in Review

This exhibit derived from a recently processed collection of 19th century Naval Academy photography. The collection included several portraits of Midshipmen. “While that is not unusual,” said Crunk, “what was exciting was that they had their names and class year written on the back of most photos.” With that in mind, Crunk set about on the daunting task of using the Registers of the Commissioned Officers of the United States Navy and Marine Corps to research every assignment of these Midshipmen, along with their corresponding rank and duty assignment throughout their careers. The GIS Story Map software helps users pinpoint the exact location of these individuals throughout their service by clicking each data point on the map. You can compare assignments, locations of appointments, and ranks over a period of more than 35 years. It is an excellent way to see how a small group of men all started their careers together in the same year and then follow how and where they served (as well as died) over the course of time.

VIEW THE GALLERY: The United States Navy Academy Class of 1892 – Careers in Review 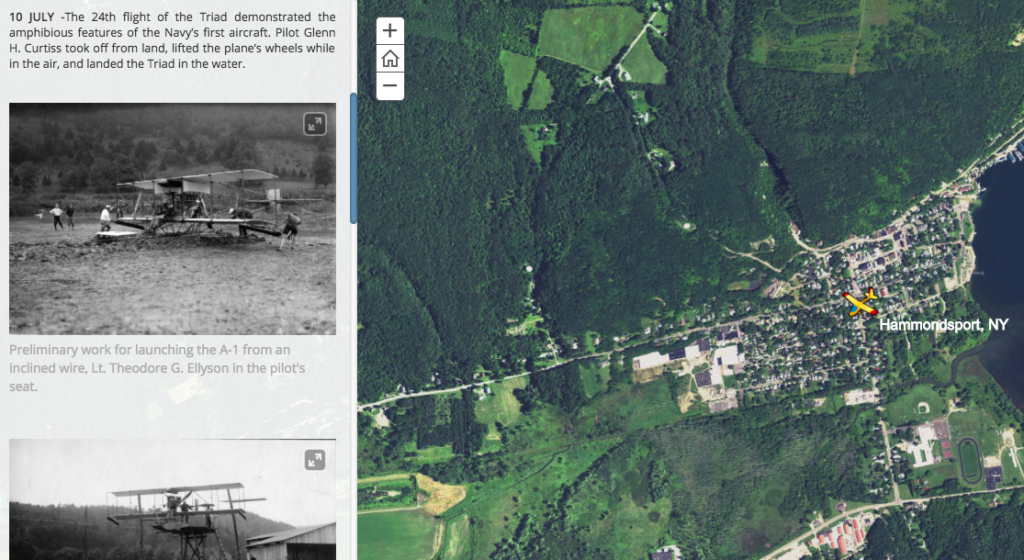 A look at the GIS Software Used in the Exhibit (Screencap via www.history.navy.mil)

Pioneering Naval Aviation comes from the photo collection of naval aviation pioneer Washington Irving Chambers. The Washington Irving Chambers collection consists of several hundred images of early naval aviation from the years 1911 to 1914. Tabs are set up across the top of the page to show separation of a subject, like a book would use chapter headings. There is also much less use of the map function in this exhibit. The map is solely used to show the location of where the test flights took place. The collection contains imagery that follows the work of Mark L. Evans and Roy A. Grossnick in their 2015 publication “United States Naval Aviation 1910-2010.”

U.S. Navy Battleships – A Century of Service is a pictorial history of US Navy battleships, from 1894 to 1991. This exhibit was designed to use the non-map based functionality of the Story Map software. Photo Archivist Dave Colamaria painstakingly included over 100 high-resolution images of battleships in the exhibit, following the history of these ships from initial conception through final deactivation. “Battleships are consistently one of the most popular subjects on any naval history website,” said Colamaria, “so this seemed like a good starting point to experiment with an image-based design.” The Story Map software allowed the nearly 100 years of history to be broken down into small sub-sections, each with an introduction helpful to lay users and researchers alike. Users scroll through 100 years of content in an intuitive manner, with imagery presented in a larger format than our current website allows.

VIEW THE GALLERY: U.S. Navy Battleships – A Century of Service

Plans are in the works for more presentations in the future. “We hope to build more exhibits as we come across fascinating donations as well as general imagery related to a particular subject, such as with our pictorial history of the US battleship page,” said Crunk. We are looking forward to seeing more interactive exhibits in the future.

Special thanks to the NHHC Photo Archivists for contributing to this story. If you have Navy photos that you would like to donate to the Navy’s collection, please contact Lisa Crunk, Head Archivist.