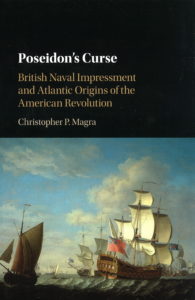 Although impressment, or the taking men by force into military or naval service, has been widely practiced throughout history, the British Royal Navy (RN) is most often associated with its use. For about 150 years, from the late 17th century until the end of the Napoleonic wars in the early 19th, the RN famously met its crew requirements by sending armed groups known as press gangs to seaside towns and cities, literally grabbing men off the streets and compelling them to join the navy. Impressment was pervasive; the RN pressed men not only from England but also British colonies and other countries as well as merchant ships, on both land and sea. British, colonial and foreign citizens despised impressment, and many government officials decried it as inconsistent with the constitutional rights of “freeborn Englishmen.” Nevertheless, the RN needed to force recruitment because of the need to protect colonial interests and growing global commerce was constant and mushroomed during frequently occurring wars in the age of sail. Throughout the period, naval pay was low, and life at sea was hard at best, often fatal; hardly incentives for voluntary service. Americans knew that impressment was an important cause of the War of 1812 with Britain when the U.S. sought to safeguard American merchant seamen sailing trade routes around the world.

In Poseidon’s Curse, Prof. Christopher Magra, a historian specializing in the early American period, takes a slightly different tack. He argues that RN impressment was a major factor in the American Revolution and meticulously documents a case for his view.  Furthermore, Magra presents his evidence in the context of the Atlantic World, a historical construct that examines the interactions of societies and cultures in the regions framing the Atlantic Ocean from the Age of Exploration forward. Significantly, Atlantic World history focuses heavily on the slave trade that forged massive economic links among Europe, Africa and the New World, links that the RN in large part protected and preserved until the 19th century. African slavery, sugar production in the Caribbean, North American raw materials and British and European finished goods formed the web of Atlantic trade that tied disparate geographic and economic interests together and produced significant consequences, intended and unintended.

Magra’s argument, backed up with voluminous scholarly research, is that Britain and the RN were in many ways victims of their success. Britain’s dominance of maritime commerce and its rapid imperial expansion generated requests for protection from commercial interests. He calls the symbiotic relationship between commerce and naval security the Atlantic minuet, and it turned out to be an enormously costly dance. The RN usually received sufficient resources to prevail in wartime, but through much of the period under study, Britain and its Parliament tried to meet security and commercial needs on the cheap by sanctioning impressment, although a 1708 act exempted many Americans from the practice. That would change, however, in 1746. The new act fomented immediate resistance in the colonies, notably 1747’s Knowles Riot in Boston against Commodore Charles Knowles’ efforts to press colonists for his fleet. From that point forward, colonists considered impressment one of several British oppressions against American liberty, and it would be listed among the grievances in the Declaration of Independence in 1776.

Dr. Magra makes clear that the RN’s insistence on impressment not only affected America’s relationship with Britain, leading to the Revolution and independence, but also damaged the service in its relations with the Atlantic world’s merchants and commercial mariners, undercutting its military effectiveness overall. His narrative minutely examines British, colonial and foreign resentments against the practice and evaluates the negative impact of impressment on the profitability of maritime trade, property, mariners’ earnings and employment, and the concepts of individual liberty and freedom of the seas (both of which helped to create Britain’s extraordinary global power in the 18th and 19th century). Magra’s assessment underscores the irony of impressment, at once an instrument facilitating Britain’s seagoing supremacy and the signaling the start of imperial decline.

Poseidon’s Curse is a thorough work of scholarship, probably not for popular history readers but certainly of value to those interested in the Royal Navy’s heritage in the age of sail.