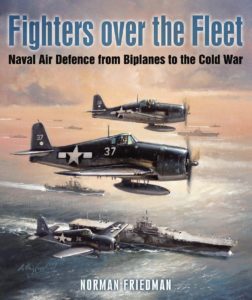 Fighters Over the Fleet takes prolific author Norman Friedman into one of the few areas of naval weaponry he has not previously examined.[1] Building on his earlier work on aircraft carrier development with Thomas Hone and Mark Mandeles as well as Freidman’s more recent book on naval anti-aircraft gunnery, this book examines the design, development, and employment of aircraft carrier-based fighters from the early 20th century through the end of the Cold War. Friedman emphasizes the American and British naval experiences, in part due to records availability and in part because he views these two navies as making the primary contribution to developing fighter air defense. In particular, the book relies heavily on the U.S. Navy’s Bureau of Aeronautics correspondence files at the National Archives and Records Administration as well as the National Archives in London and other archival collections.

Friedman begins by emphasizing the carrier-based fighters function as part of a larger defensive system that includes shipborne and later airborne radar and spotters, anti-aircraft guns, missiles, and an information clearinghouse known as the Combat Information Center (CIC) in the U.S. Navy and the Action Information Organization (AIO) in the Royal Navy. The first chapter surveys the administration and organizational structure and history (briefly) of the British, American, and Japanese naval air arms which sets up the first half of the book. He then outlines the unique factors influencing naval fighter aircraft design: size limitations based on hangar size, the ability to withstand the shock of carrier landings, and resistance to the corrosive effects of salt water spray. These challenges shaped fighter development in the early 20th century as navies struggled to employ fighters with limited means of directing them, radar not being invented yet. Friedman shows that the British, Americans, and Japanese all adopted fighter defense systems that reflected the unique physical characteristics of their aircraft carriers, the nature of the anticipated aerial threat, and the current thinking about the role of fighters in naval combat.

In the Second World War, the introduction of radar made dramatic improvements in fighter effectiveness possible. However, this increase in combat utility depended on a shipboard capability to create a picture of relative aircraft positions and then to guide defending fighters to interceptions based on that picture. The British AIO fulfilled these roles, and the Royal Navy was the first to demonstrate this capability. Adopted by the Americans, this system proved its worth in defending U.S. carrier fleets in the Pacific against massed Japanese air attacks late in the Pacific War, with Okinawa illustrating the limits of the system. Friedman devotes a chapter to fleet air defense off Okinawa, in part because of the battle’s impact on postwar naval thinking.

The next chapter examines the introduction of jet engines into naval aviation as well as the development of the first guided air to air missiles. To employ jets on carriers required three technological innovations, all with largely British origins: the steam catapult, the angled flight deck, and the mirror landing system, which Friedman describes drawing upon his previous work with Hone and Mandeles. However, jets were still in their infancy when the Korean War demonstrated the need for improved carrier borne jet performance.

Post-Korean War U.S. fighter design led to the large, long-range F-4 Phantom, designed as in interceptor and nuclear bomber. Friedman then examines the threat posed by Soviet land-based naval aviation bombers equipped with increasingly capable anti-ship missiles. A series of 1950s U.S. fleet air defense exercises demonstrated the need for long range fighters equipped with long-range missiles, initially the stillborn Missileer but eventually the F-14 Tomcat. For the British, the government’s decision in the 1960s not to pursue further conventional aircraft carriers meant that the task force sent to retake the Falklands in 1982 was only defended by Harrier jump jets. Not designed for fighter defense, the Harriers performed admirably, even without airborne radar surveillance support (AEW).

Friedman concludes by examining the U.S. Navy’s 1980s Maritime Strategy which involved, among other things, the use of Tomcats, AEW, and the Aegis anti-missile system to draw Soviet bombers into battle and destroy them. Friedman concludes that by the late 1980s the odds of this potential Outer Air Battle were moving towards the Americans (391).

After a short epilogue, 45 pages of footnotes provided further technical detail for those unsatisfied with the extensive detail already present in the text. Hundreds of photographs illuminate the text. Fighters Over the Fleet provides more information about fleet air defense than any other work currently available. It is recommended for specialist as well aviation-minded readers.