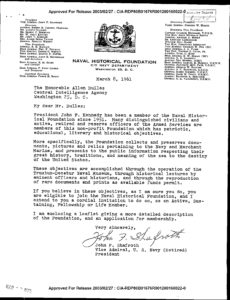 That was the question posed to CIA Director Allen W. Dulles on March 30, 1961. At the time the CIA was heavily engaged in the Cold War against the Soviet Union. With a new president exhorting the nation two months earlier “that we shall pay any price, bear any burden, meet any hardship, support any friend, oppose any foe to assure the survival and success of liberty,” the nation’s intelligence agency operated against Communist insurgencies in Africa and Southeast Asia. In Germany, the divided status of Berlin threatened to erupt into a crisis. In the Western Hemisphere the agency was making final preparations for the liberation of Cuba in what would later be known as the Bay of Pigs fiasco.

As recently uncovered while conducting research by NHF Board member David A. Rosenberg, on that day, the Director of the CIA, Allen W. Dulles, was presented with two letters prepared for his signature along with a MEMORANDUM FOR THE DIRECTOR from his acting assistant that he sign the letter declining “the attached invitation to join the Naval Historical Foundation.” In the memo the assistant concluded “From an Agency viewpoint, however, I doubt whether the Foundation has enough interest for you to lend your name to it.”

The letter in question was sent to Dulles on March 8 by the president of the NHF. In his opening sentence Vice Admiral Shafroth wrote: “President John F. Kennedy has been a member of the Naval Historical Foundation since 1951.”

The director of the CIA reviewed the invitation and the two alternative responses and penned his signature to the letter that read: “I would consider it an honor and a privilege to be a member of your worthy organization and accept your invitation with pleasure. I enclose herewith my application for an active membership and my check for $5.00 covering annual dues.”

Why should YOU join? Find out!