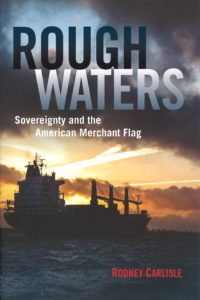 I was very impressed with the new content the author brought to my attention coming into this book. The author takes a deep look into the often arcane aspects of maritime law and practice to uncover the largely unknown origin of the contemporary phenomena of flags of convenience and second registries that serve as an example of the dynamic process between the efforts of states to regulate the conduct of maritime commerce and the desire of companies engaged in such commerce to strenuously avoid such regulations, at times abetted by the American government for reasons of state. The War of 1812 began in large part because of concerns about the dignity of the American flag and it lack of respect by the British Navy. One thing the flight of ships from one flag to another has done in the past few decades is reduce the tension on the part of patriotic Americans to feel it necessary to thrash pirates engaged in maritime depredations in places like the Strait of Malacca or the Gulf of Guinea or the Horn of Africa. The author states that “this work unfolds that tale,” and it does.

And what a tale it is. Beginning with a discussion of the prickly maritime code duello that led many nations into wars to defend the honor of the flag, the author looks at disputes over the right of search related to the War of 1812 and the fight against the illegal international slave trade, the use of false flags during the Civil War as Union merchantmen sought to avoid destruction at the hand of Confederate commerce raiders, and the frequent problems of insults to the flag in the postwar period when America’s naval impotence led other nations to feel no compunction about the threat of retaliation. Thus far, the author is on ground that is familiar to many readers, but it is precisely at this point that the book takes a turn into areas far less familiar to many. First, the author shines a spotlight on the obscure Muscat Dhows Decision and the biased nature of how it was made by the august writer of the “separate but equal” decision of the Supreme Court in Plessy v. Ferguson (for which he is remembered in American history). He then examines the obscure role of the semi-autonomous city-state Danzig during the 1920s and 1930s in providing the link between that decision and the contemporary problem of flags of convenience, showing how ships fled the flag of Danzig upon the rise of Nazi Germany and sought a safe harbor in Panama. Panama’s role as a flag of convenience allowed for a cozy relationship with the United States and a reduction of tensions in the lead-up to World War II, and thereby allowed a way for ships that could not meet American standards to still be used in the war effort. The success of these efforts allowed for the proliferation of similar states like Liberia, whose national registry was written by American lobbyists in the interests of American maritime firms who used it happily until Liberia’s political situation soured, which led to a shift to the Marshall Islands Register, whose quick success heralded a new age of second registers and problems of port-state control that plague us to this day.

The author’s research reveals a fundamental tension between maritime trade and national policy. Internal political pressures often push port-state nations to seek for security and regulations that benefit first world workers within the merchant marine. Other political pressures, though, lead to the desire on the part of companies to avoid such regulations and seek out flags which allow for a greater freedom of action and less burdensome requirements. Yet as nations and dependencies see a great deal of income in nations wishing to register under their flag, there are similar pressures on their part to increase the income that they draw from those sources, which leads companies in a search for lower regulations and fees, even as port-state nations show increasing concern for their own environment and national security.  This book shows the results of that tension in fascinating ways, and shows that these tensions are nowhere close to any sort of resolution and balance at present.

Those readers who have a strong interest in naval history, the complicated relationship between maritime commerce and foreign policy, and globalization will find a great deal of interest in this fascinating book. It is likely that just about anyone reading this book will uncover some new and deeply intriguing tidbit of information from the author’s immensely far-reaching research into the relationship between flags of convenience and diplomacy. The author’s insights are as enlightening as they are frequently distressing for those of us who are fond of preserving and encouraging the development of our national merchant marine and who find the use of flags of convenience to avoid regulations that provide for decent pay, concern for the environment, and even the safety of crew members to be a problematic aspect of contemporary life. This book is clearly aimed at those who care about the well-being of people at sea and who have an interest in the history of American maritime commerce, and that is an audience that is likely to appreciate this book to a great degree.