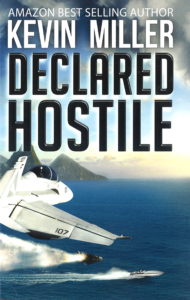 Those who read Kevin Miller’s book Raven One will find that he has once again authored a fascinating and believable book. This time the story centers on a contemporary but fictitious U.S. Naval action in the Caribbean. The naval action within this book revolves around Cdr. Jim “Flip” Wilson who the reader first encountered in Raven One. That Kevin Miller, the author of this book, was once a Navy pilot comes through loud and clear as one reads each page of the book. Because the story is told in Navy lingo, the author thankfully provides a glossary of naval terms and acronyms at the front of his book.

Some may find the story line in Declared Hostile somewhat far-fetched, but who would have given credence to the 9-11 attack on the United States if presented in a work of fiction in 1999.  Today it is, unfortunately, a fact of life that national leaders and heads of drug cartels sometimes collaborate to ensure that each other survive. It is also a fact that terrorism is used by both governments and non-governmental organizations to ensure conformity to their goals. It is also a fact that the United States is not all powerful and cannot impose its will throughout the world, and it must often limit the military force it uses against an adversary.

The story line of the book centers around an alliance between portions of the Venezuelan government and a drug cartel that directly threatens the security of the United States. The author performs an impressive job in bringing to life not only the men and women of the aircraft carrier Coral Sea and its air squadrons, but also the members of the cartel and their allies. We get not only to know these individuals as people but what motivates them. The author, paints a beautiful canvas that one can judge not only the actions of Cdr. Wilson and his fellow pilots, but the steps taken by the drug cartel and its allies as well. While the climactic battle is well-written and believable, the author does not end his book here; instead, he continues to examine the retribution inflicted upon those the drug cartel leadership believe failed in carrying out their assignment or who helped the United States.

Bogart is a frequent contributor of Naval History Book Reviews.