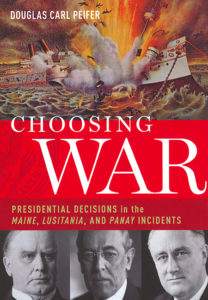 This remarkable book by a professor at the Air University was motivated by his concerns about how policymakers and strategists cope with the multifaceted aspects of contemporary naval incidents. He is convinced that the study of history is far more useful to them than are the typologies formulated by political scientists and gurus from strategic think tanks. “History provides no clear lessons of what we should do, but by dissecting the past we develop familiarity with complexity, interdependence, and the role of chance, fog, and friction.” (p. 248) Douglas Peifer’s “dissection” of three historic maritime crises is thorough in content, comprehensive in possible interpretations, and highly nuanced in his own viewpoints. His linkage of these superficially disparate episodes separated from one another by forty years is a exemplary feat of historical interpretation.

On January 25, 1898, the second-class battleship USS Maine steamed past Morro Castle into the harbor of Havana, Cuba, where she would remain moored until ripped apart at 9:40 p.m. on February 15 by a never conclusively explained explosion. Of the 328 enlisted sailors on board, 250 died from the inferno and blast effects that gutted and sank the ship. President William McKinley had dispatched the Maine as an element of what Douglas Peifer calls “assertive diplomacy.” (p. 35) The president’s intention was to persuade a new Spanish government in Madrid somehow to bring an end to a festering indigenous rebellion raging across the colonial island for the last three years. Beyond ending the warfare, McKinley’s exact goal was indecipherable. According to Peifer, the president’s diplomatic assault on Madrid lacked the essential elements of “clarity and precision.” (p. 36)

Peifer seems to think McKinley’s imprecision destined him to fail, but in any case the destruction of the American warship, allegedly by an external source such as a mine, transformed American policy and its geopolitical stature. “The public, press, Congress and U.S. industrialists and bankers all pushed for action by late March 1898.” (p. 52) Trapped between Spain’s adamant refusal to set the island free and mounting domestic demands for intervention, McKinley asked for a congressional resolution. He was handed a declaration of war, which he would not have chosen as his only course of action. Nor did the president initially seek the Spanish-American War’s unforeseen results: a  transoceanic Pacific empire stretching from Manila to Honolulu and a new hegemonic domination in the Caribbean and West Indies.

Peifer’s second case study does not involve a U.S. naval vessel, a fundamental difference from the other two analyses. On May 7, 1915, almost a year into World War I,  German submarine U-20 torpedoed without warning the British Cunard liner Lusitania. The massive ship sank with astonishing rapidity, in 18 minutes; 1,198 passengers died, 128 of who were Americans. United States neutrality in the war was shaken at bedrock. Woodrow Wilson’s intimate advisor, Colonel Edward House, wrote the president on the day after the atrocity, “America . . . must determine whether she stands for civilized or uncivilized warfare. We can no longer remain neutral spectators.” (p. 90) But as Peifer shows, the United States did remain a bystander for another two years.

Woodrow Wilson articulated a lofty policy of neutrality. He asserted as universal the rights of free maritime passage on the high seas and unlimited trade in non-contraband goods with other neutrals and belligerents. Wilson’s preeminent biographer Arthur Link portrays the president as “strictly neutral in thought and deed,” but Peifer dismisses this assessment as “disingenuous.” (Pfeifer’s words; p. 110) He contends that prior to the sinking of the Lusitania Wilson repeatedly softened his protests against Britain’s violations of American neutral trade because, “Deep down, Wilson sympathized with Britain’s plight. . . .” (p. 110) Moreover, the president “had no desire to become another [James] Madison and push the issue of American rights so far as to lead to a rift in relations with Great Britain.” (p. 110) Germany was another matter.

The Lusitania catastrophe caused Wilson to protest strongly against Germany’s conduct of maritime warfare, specifically unrestricted submarine attacks on merchant and passenger ships. As Wilson grappled with fashioning his protest, Secretary of State William Jennings Bryan repeatedly urged him “to couple protests against submarine warfare with protests against British naval interdiction of trade. . . .” (p. 133) Wilson would not do so. Profoundly alarmed by what he saw as the president’s dangerously provocative stance toward Germany and his unyielding complacency toward British disregard for American maritime rights, Bryan resigned on June 8, 1915. The president at that moment lost the counsel of an advisor whom Peifer admires for his “common sense.” (p. 141) The “Great Commoner” was replaced by the number two at State, Robert Lansing, a pro-British hard-liner criticized by Peifer as “always the stickler for legalities.” (p. 138)

In the short run, Wilson’s strong notes did induce Germany to abandon unrestricted submarine warfare, but Berlin revived the practice with a vengeance in January 1917. The president had no choice but to declare war. Nonetheless, in the long run, according to Peifer, both Wilson and Bryan were vindicated. The president’s shaping of his Lusitania protests in terms of overarching and transcendent principles contributed to the growth of postwar “Wilsonianism or internationalism.” (p. 144) Ironically and concurrently, Peifer contends, Bryan’s “conception of impartial neutrality” experienced a “postmortem revival” in the isolationism of the late 1920s and 1930s. (p. 168)

In 1937, as isolationism was engulfing the United States, war erupted between China and Japan. The United States reflexively adopted a mantle of impartiality, but President Franklin D. Roosevelt refused to invoke the paralyzing Neutrality Act of 1937. FDR’s wary stance of aloofness did include the continued stationing of six U.S. naval gunboats on the Yangtze River, where they could protect Americans and their manifold interests. It was a risky business.

At 1:35 p.m., Sunday, December 12, 1937, one of these riverboats, the 191-foot long, lightly armed USS Panay, which was prudently anchored twenty-seven miles upriver from Nanking, was attacked without warning by Japanese naval aircraft. High-level bombers and smaller dive-bombers dropped their ordnance, and fighters strafed the unprepared and effectively defenseless gunboat. The attack lasted 20 minutes. Several of the crew and on board civilians fleeing the combatant carnage of Nanking were killed or wounded. The abandoned ship rolled over and sank at 3:54 p.m.

Ambassador Joseph Grew in Tokyo ordered his staff to plan for evacuation. It was déjà vu: the atmosphere reminded Grew of what he had experienced as first secretary in the Berlin embassy during the Lusitania crisis. (p. 153) He was not alone in melding the two incidents. Although the Panay was a U.S. Navy vessel and the Lusitania was a foreign passenger liner, the outraged American popular reaction in 1937 generally ignored this vital distinction, although policymakers did not.

Washington’s resolution of the crisis came swiftly. The president may have favored a forcible response, as recommended by the secretary of the navy and chief of naval operations and a few others in the administration, but as a sensitive political animal Roosevelt felt hamstrung by the nationwide strength of isolationist sentiment. Moreover, “he had no proof that the Japanese government had instigated the attack. . . .” (p. 209) As if to confound the Americans, Tokyo denied responsibility but apologized for the attack and promised to punish the officers in China who had authorized it. The administration accepted the apology on December 24, and on Christmas Day Secretary of State Cordell Hull signaled the government’s acceptance. The crisis was past, but ten years’ later Hull reflected the undying American skepticism about Japan’s claim of innocence: “But that the Japanese military leaders, at least in China, were connected with it, there can be little or no doubt. In any case, it was their business to keep their subordinates under control.” (Hull quoted, p. 211)

Peifer totally transcends Hull in assessing the Panay’s significance. Because Roosevelt was “adept” in his “measured handling of the Panay crisis,” (pp. 216, 218) it “represented the culminating point of isolationism. The president used the episode to begin to claw back presidential powers and prerogatives.” (p. 215) He began his political unshackling in January 1938 with his successful request for Congress to fund “a 20 percent expansion of the U.S. Navy. . . . ” (p. 221) The triumphal march continued through all of the well-known quasi-war measures that characterized FDR’s presidency from then until Pearl Harbor. The administration’s thirteen days of anguish in December 1937 had ordained America’s drift toward global war as conclusively as had Wilson’s pained reaction to the Lusitania crisis a generation earlier.As one closes this superb book, the reader rather suddenly comes to the somber realization that war followed all three crises, either immediately or in the medium to long term. This outcome was contrary to the hopes of the presidents struggling with the incidents. It is not one the author would desire. To his credit, Carl Peifer does not allow this morbid determination to sap the richness of his meticulous examination of the naval flashpoints that led to national bloodshed.

As one closes this superb book, the reader rather suddenly comes to the somber realization that war followed all three crises, either immediately or in the medium to long term. This outcome was contrary to the hopes of the presidents struggling with the incidents. It is not one the author would desire. To his credit, Carl Peifer does not allow this morbid determination to sap the richness of his meticulous examination of the naval flashpoints that led to national bloodshed.